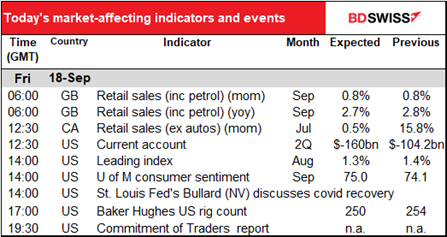 Right for the wrong reason: I thought the Fed’s decision was dovish – it effectively implied that rates will stay at zero until the next ice age occurs — and the dollar should weaken as a result. However the markets took it in the opposite fashion – the Fed didn’t say anything about the maturity profile of the $120bn in bonds that it buys every month. Apparently many investors were expecting them to shift their purchases, which are now distributed across the yield curve, toward the long end in a mild form of “yield curve control” (YCC). Disappointment over the lack of this move sent US stocks lower, which in turn hit the dollar. So right for the wrong reason.

NZD was the best-performing currency after Finance Minister Grant Robertson hinted that maybe the Reserve Bank of New Zealand (RBNZ) won’t move to negative rates next year after all. In an interview with Bloomberg Television, he said that the NZ economy is rebounding from recession and looking robust. The RBNZ has pledged to keep the Official Cash Rate (OCR) unchanged until next March ends “Between now and then we’ve got to see the economy stabilize and rebound strongly through the next couple of quarters, and they’ll no doubt take that into account as they go forward,” he said. Noting that things are going well in financial markets and banks are lending, he added that the “will bear all of that in mind when they come to think about their decisions post-March next year.”

It’s certainly true that although NZ registered a steep -12.2% qoq drop in GDP in Q2, the market expects the rebound in Q3 to be one of the steepest anywhere. As a result, the NZ economy is expected to recover to pre-pandemic levels of output faster than most other major industrial countries. Given these optimistic comments and the “risk-on” tone in stock markets in Asia this morning, I think we could see further gains in NZD. 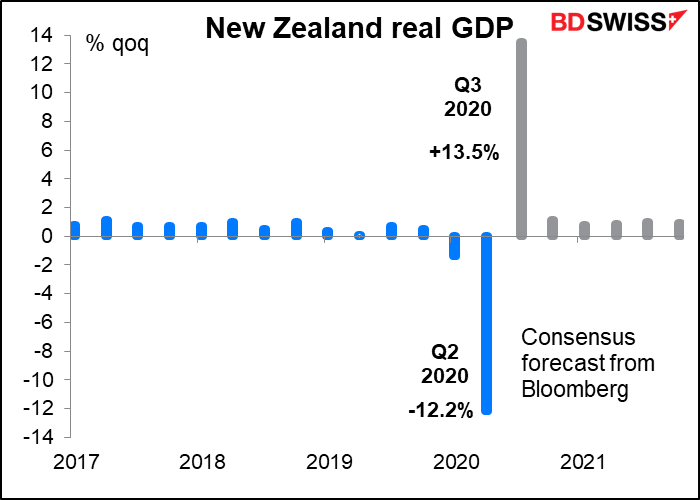 We’ll learn more about what the RBNZ is thinking when they announce their rate decision next Wednesday . I’m expecting them to stick to their current stance and not make any changes, although from what Robinson said they might upgrade their outlook on the economy (see today’s Weekly Outlook for details).

Elsewhere, GBP had a roller-coaster day. The Bank of England vote unanimously to keep policy unchanged, which should have been either neutral or slightly positive for GBP, but at the end of the minutes of their meeting they said that they would “begin structured engagement” with the Prudential Regulation Authority “on the operational considerations” for implementing negative rates “should the outlook for inflation and output warrant it at some point during this period of low equilibrium rates.” The news sent GBP down sharply.

I’m not clear why this was such a shock. The Overnight Index Swap (OIS) market had been predicting negative rates for some time. 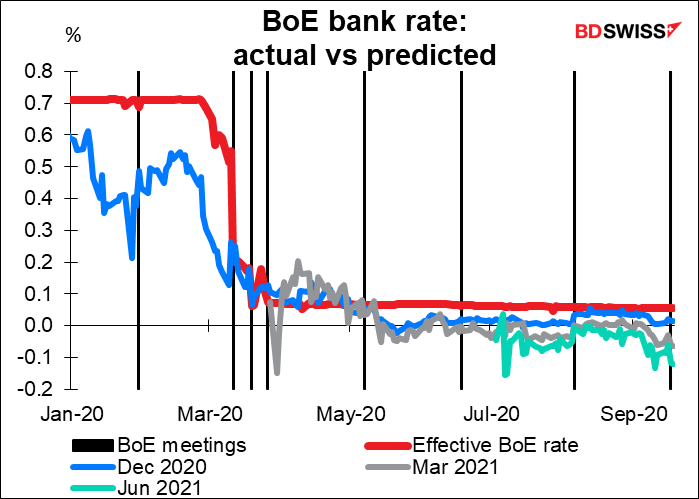 One reason that may have spooked the market was that the Bank’s baseline scenario assumes a smooth transition to a comprehensive free trade agreement with the EU on 1 January. Hah! Good luck with that! And what if it doesn’t happen, as looks increasingly likely? That could be the event that triggers negative rates. This assumption on the part of the Bank makes the connection between Brexit and rates more direct and therefore is likely to make GBP more sensitive to Brexit news. As if to prove that point, GBP rebounded later in the day after the FT quoted EC President von der Leyen saying she is “convinced” the EU-UK trade deal can be done.

Oil was up 4% after the monthly OPEC+ Joint Ministerial Monitoring Committee meeting reassured the market that the organization’s members plan to comply with agreed output cuts. The UAE said it would cut output in October and November to compensate for overproduction in August.

USD/CAD generally followed oil. I think we could see further gains in CAD today based on this correlation.

We’ve already had UK retail sales out this morning. They were slightly better than expected, which is helping GBP to recover this morning.

That’s the biggest thing out during European time. So you can take a nap for a while, or just follow the technicals. Maybe read my Weekly Outlook once it gets published.

Then comes Canadian retail sales. They soared almost 16% mom in July as pent-up demand came roaring back, but now that that’s mostly satisfied, the market looks for a modest rise. Employment is up but unemployment benefits are waning, which cuts into the amount people have to spend. The (expected) slowdown in July portends a difficult August, particularly if the government doesn’t come through with another fiscal package. Sales are expected to be 3.4% above the pre-pandemic level; that suggests a long way to fall as government support fades. 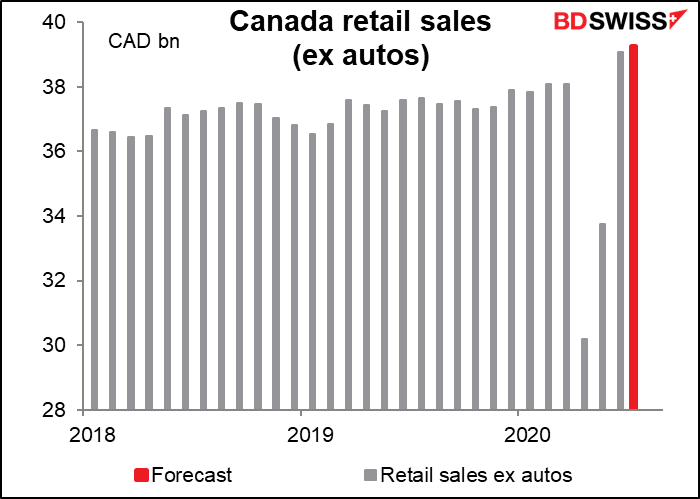 US consumer confidence plunged in March and again in April, but has stayed in a narrow range ever since. That’s surprising to me. Given the daily news about virus cases & deaths, plus the incredibly high level of unemployment, I would’ve thought sentiment would be lower, given the high levels of COVI-19 cases and the continued political disarray, not to mention some 29mn people collecting unemployment benefits. Maybe they only poll people who have money in the stock market. Maybe people’s spirits are buoyed by the thought that this national nightmare may end soon. 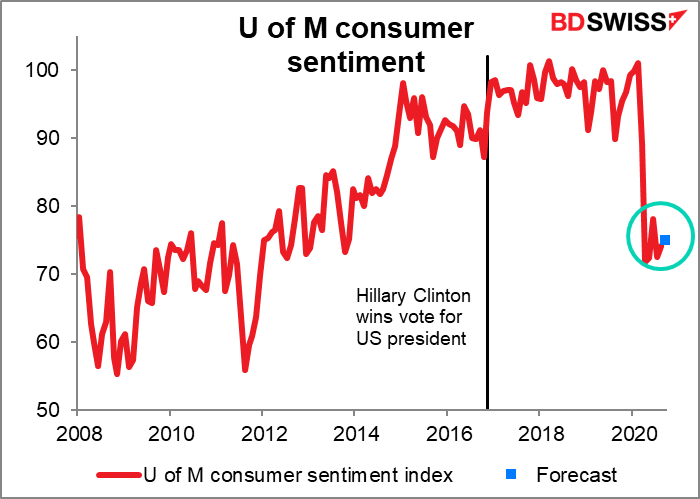 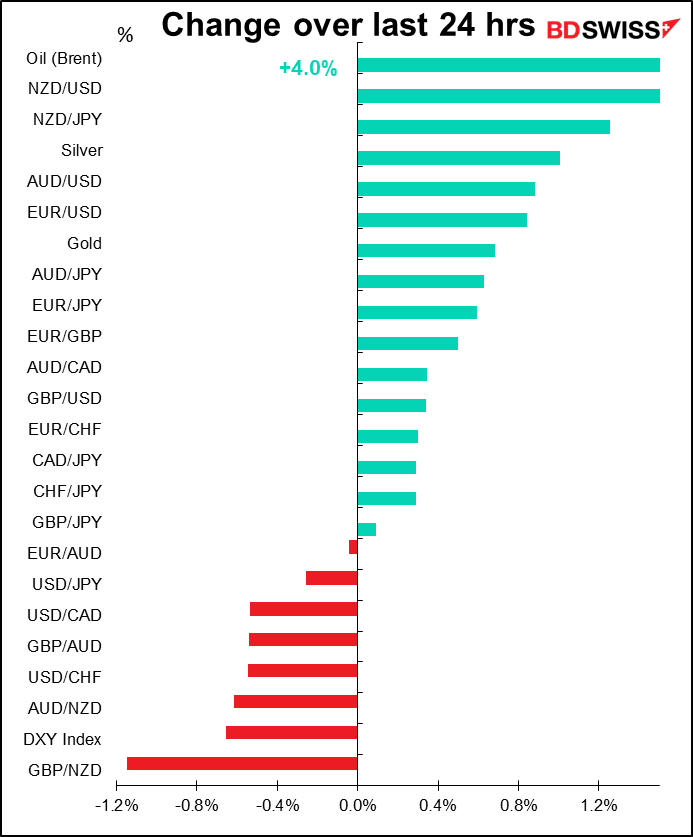