Commodity Currencies Up, Safe-Havens Down as Two Main Threats Recede; US NFP 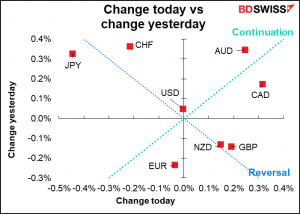 With the US debt crisis averted and natural gas prices off their highs, risk appetite came back yesterday. Stock markets were mostly higher (and are higher again this morning in Asia) and the reaction in the FX market was as one might expect: the risk-sensitive commodity currencies up, the safe-haven JPY and CHF down. USD was little changed overall though.

As for the debt ceiling, the Republican Senators dropped their threat to block the legislation and the Senate voted 50-48 (no Republicans voting “yes”) to increase the debt limit by $480bn. The House of Representatives will pass the measure on Tuesday. This should allow the country to operate until Dec. 3rd, the first Friday in the month, when the government funding and the debt ceiling both expire, at which point the whole charade starts over again. There is a way for the Democrats to raise it for a longer period, but they’d have to do it by invoking certain processes that would allow the Republicans to go to their supporters and say “See! The Democrats are going to bankrupt us by borrowing all this money!” never mind the Trump tax cuts that benefited only the rich when the economy was already doing well and didn’t need any more stimulus.

The T-bill market shows how the fears of a US debt crisis have been pushed out. The T-bill maturing right after the supposed Oct. 18th cut-off date when the US Treasury was going to run out of money is now yielding less than the T-bill maturing a week earlier as buyers take profits on it. 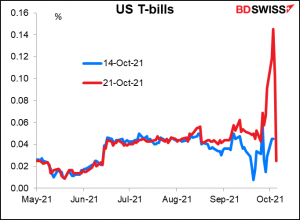 The T-bill yield curve has normalized in the front end, except now there’s a hump in early December, when the agreement runs out. Again though notice that the hump is relatively short (just during December), implying that the market expects this kind of theater and posturing to repeat itself but for the issue to be resolved fairly quickly once again. 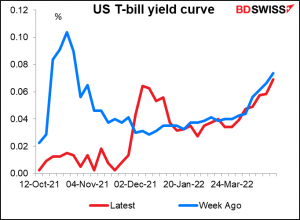 Meanwhile, Wednesday’s suggestions by Russia that it could supply more gas to Europe allowed the extremely volatile gas prices to come down from their peak.

You really have to see this in terms of percentage increase to get the full view of how wild these moves were. UK natural gas was up 37% at one point Wednesday from Tuesday’s close, then down 28% by Thursday morning. 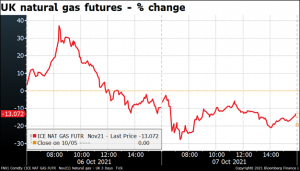 It’s still insanely high, but at least it isn’t higher. 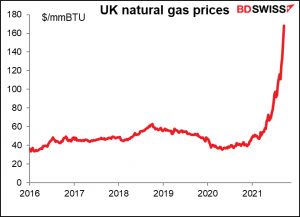 Despite the fallback in gas prices, oil managed to climb even further after the US Energy Department said that it has no plans “at this time” to tap the nation’s oil reserves nor to ban exports of crude oil. That followed remarks the day before from Energy Secretary Granholm that “all tools are on the table” to counter surging gasoline prices. 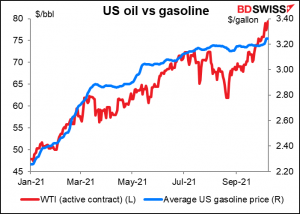 GBP did well on comments from the Bank of England’s new Chief Economist, Huw Pill. In his first public comments since taking over the job from Andy Haldane last month, Pill said “the current strength of inflation looks set to prove more long-lasting than originally anticipated.” He also said that risks to the economic and inflation outlook are “clearly becoming two-sided.” This means the Bank of England’s rate-setting Monetary Policy Committee has replaced one hawk with another. Ten-year UK breakeven inflation rates moved near 5 bps higher on the comment and UK interest rates rose. 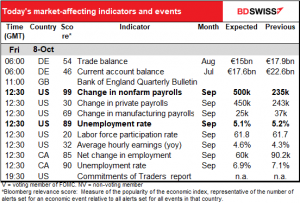 It’s US nonfarm payrolls (NFP) day today! The day you’ve all been waiting for, and if you haven’t been, then you shouldn’t be trading.

The market is looking for a moderate increase in payrolls of some 500k. 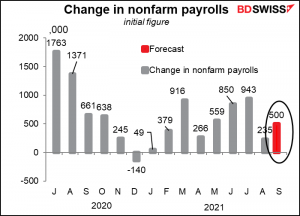 The September ADP employment report showed an increase in jobs of +568k, above the market consensus forecast (+430k). It compares with the market forecast for private-sector jobs in the NFP of +450k (the ADP report aims to predict the final report for private payrolls, which of course is different than the initial report for nonfarm payrolls as a whole, which includes government payrolls.). In the details of the report, all industries increased, with the largest increase from Leisure and Hospitality (+226k). However, the ADP report has been a particularly unreliable forecast of the NFP figure since the pandemic began. The absolute value of the error between the ADP report and the private payrolls this year has been 265k. That’s 60% of the average level of the NFP private payrolls. And it seems to be random whether the ADP is higher or lower than the NFP. So I wouldn’t bet the farm on it. 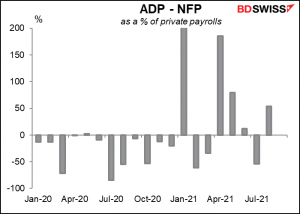 The unemployment rate is expected to tick down one while the participation rate ticks up one – both moving in the right direction. The expiry of federal unemployment insurance programs during the month plus the reopening of schools may have contributed to a higher participation rate, although it’s hard to see a major change from the weekly continuing claims figures, which were down only 138k during the month. 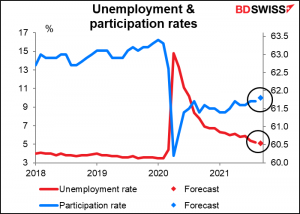 Meanwhile, average hourly earnings are expected to rise further by 4.6% yoy, up from 4.3%. But this is still below the 5.3% yoy rate of increase in the consumer price index (CPI), meaning that real wages are falling. 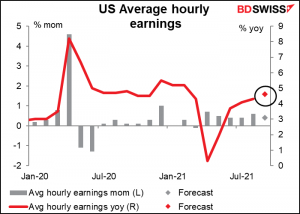 Oddly enough, the impact of the NFP on the dollar doesn’t seem to differ much regardless of whether it beats or misses estimates. Either way, the dollar seems to appreciate following the figure. My guess is that even when it misses, it doesn’t miss so badly that people think the Fed will be dissuaded from tapering down its monthly bond purchases. 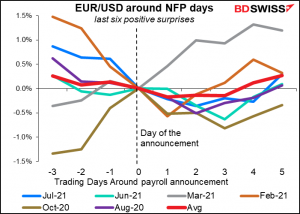 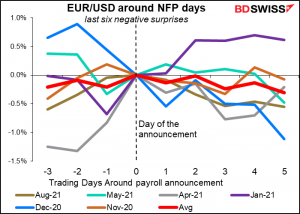 At the same time, Canada will also announce its employment data. Employment is expected to be up and unemployment to be down – that could prove positive for CAD, depending of course on what oil is doing. 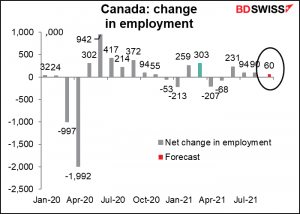 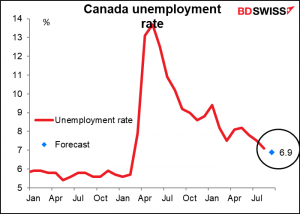 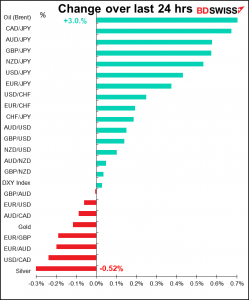