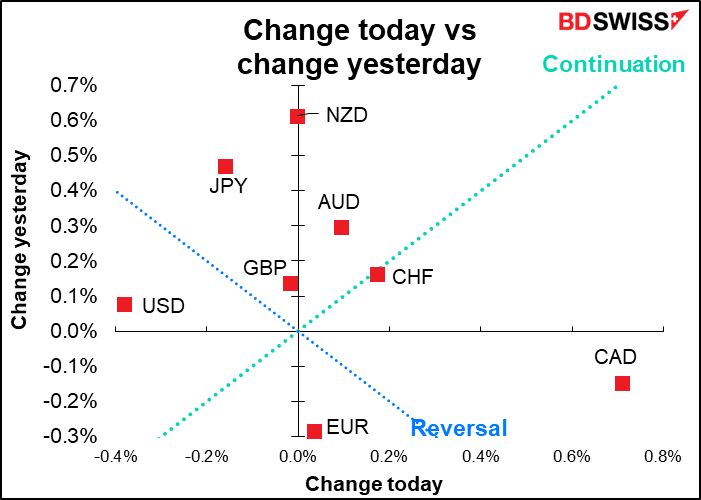 CAD was the big mover since Friday morning. It fell through 1.29 again as oil prices firmed.

Of course, that begs another question: why today? Why is USD/CAD following oil today when it doesn’t necessarily follow it every day?

It’s not because of rate spreads, which moved in USD’s advantage Friday. 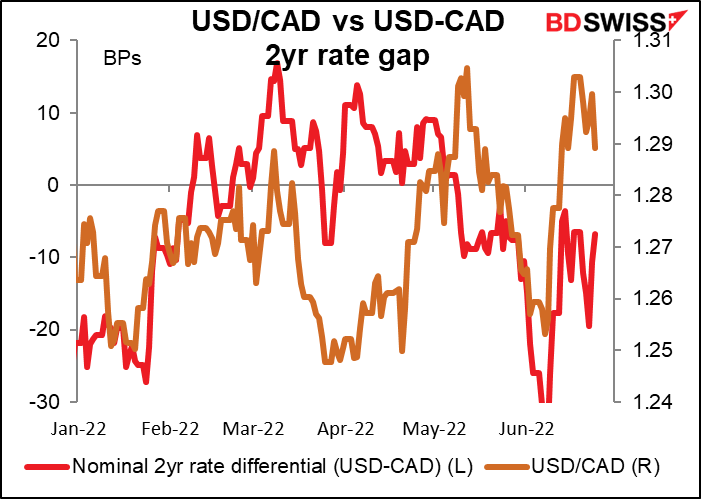 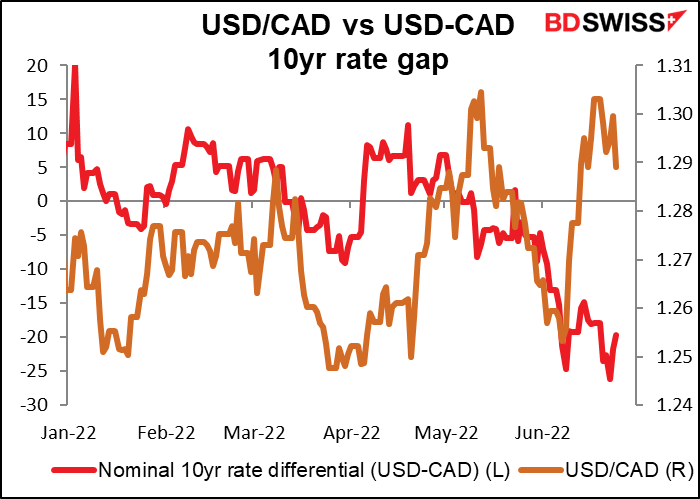 My guess is that it’s in part a reaction to USD weakness. The dollar was hit by the market continuing to price in less Fed tightening. Wednesday and Thursday it was in the long end of the fed funds contracts as the market began pricing in a recession that would force the Fed to ease. Friday the contracts at the front end (shorter-dated contracts) began to price in less tightening too. The tightening expected by December fell by 16 bps over the week, 5 bps of which was on Friday. 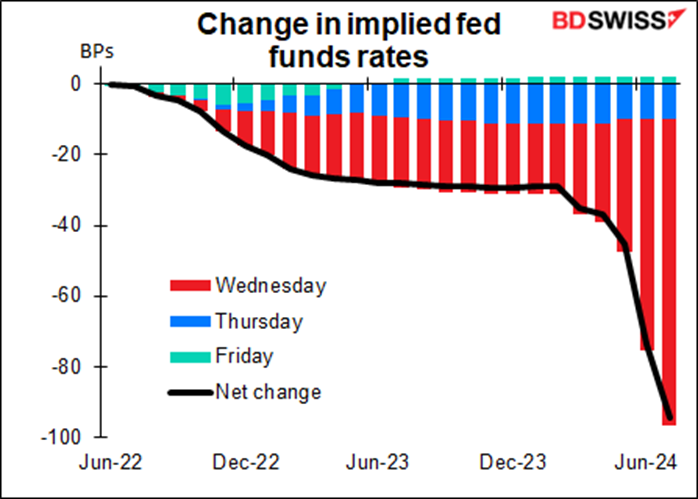 The key point on Friday was the final revision of the U of Michigan consumer sentiment survey. The consumer sentiment index was revised down slightly to a record low, and even more importantly, the survey’s long-term inflation expectations were revised down to 3.1% from an initial 3.3%. The unexpected jump in that measure from 3.0% on June 10th, just a few days before the Fed’s June 15th meeting, was said to be an important factor in their hiking by 75 bps rather than 50 bps as foreshadowed. That’s because central bankers live in dread of inflation expectations becoming “unanchored.” 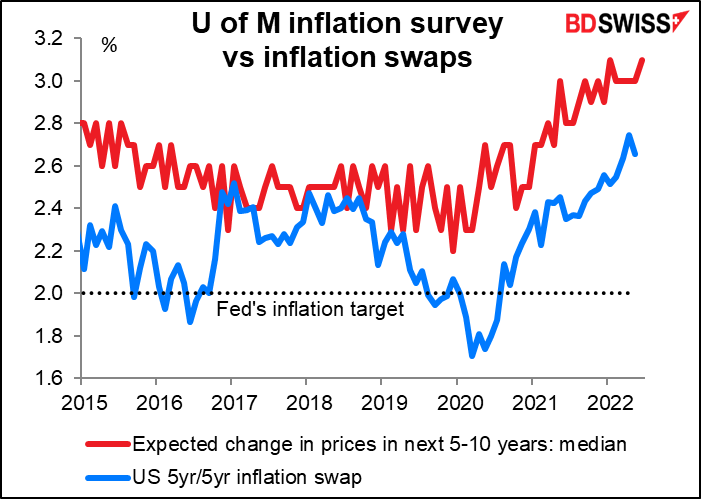 On the other hand, US new home sales were far far better than expected, which suggests that maybe the Fed’s tightening isn’t having as disastrous an impact as people had feared. But apparently nobody paid any attention to that, instead putting more weight on the views of the 500 or so people whom the U of M interviews for their survey.

The G7 meeting (see below) began Sunday and has already produced some market-moving headlines The UK, UK, Japan, and Canada plan to announce a ban on new gold imports from Russia. This is sort of closing the barn door after the horse has gone; the London Bullion Market Association, which sets standards for London gold trading, removed Russian gold refiners from its accredited list back in March. So it’s just formalizing what the gold industry has already done.

Furthermore, China and India consumer demand (jewelry + bars & coins) account for 53% of global consumer demand and some 37% of total global gold demand so this won’t do much to dampen Russian sales, just divert them to other places. Still, it’s an inconvenience, I’d guess.

The G7 is also said to be discussing a cap on the price of Russian oil that would work by imposing restrictions on insurance and shipping. I’m totally mystified by this idea as some 95% of the world’s tanker fleet is insured through the International Group of Protection & Indemnity Clubs in London and some firms based in continental Europe and I thought they had already agreed not to insure Russian cargoes at all. Furthermore Russia is offering insurance through the Russian National Reinsurance Company, which may be good enough for some of the Indian and Chinese companies that are now the main buyers of Russian crude. We’ll have to wait to see the details.

Not much change in positioning last week. The biggest change was in CAD, where speculators cut their long positions down to almost nothing as USD/CAD moved over 1.30. Oops! They should’ve held on for a few more days. Also there was a noticeable change in EUR, where they increased their shorts, and JPY, where they trimmed their shorts. 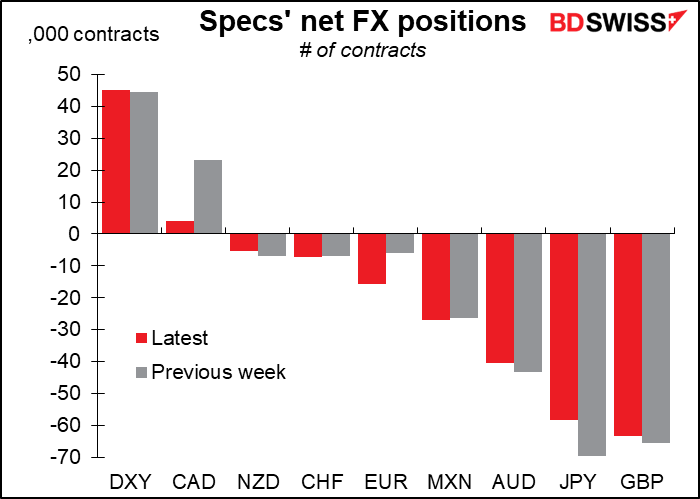 Positioning in  CAD has been pretty small recently anyway. 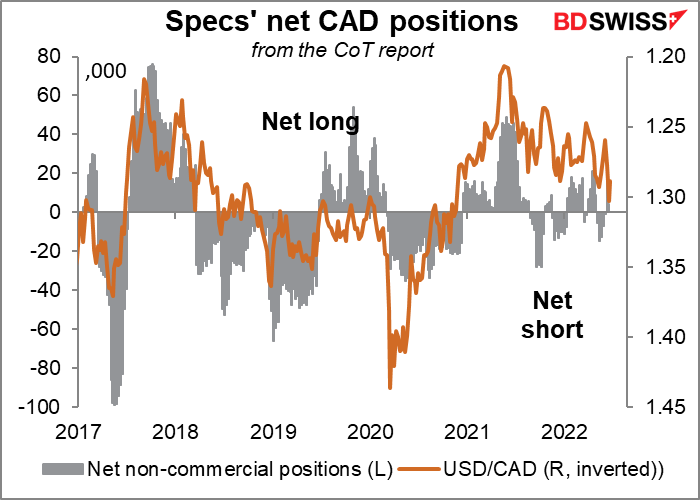 Although the weekly change was small, the net position in the DXY dollar index hit the highest level since March 2017. 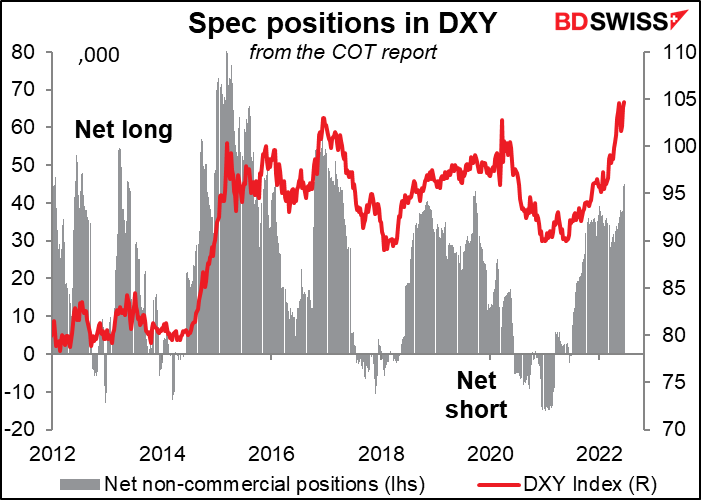 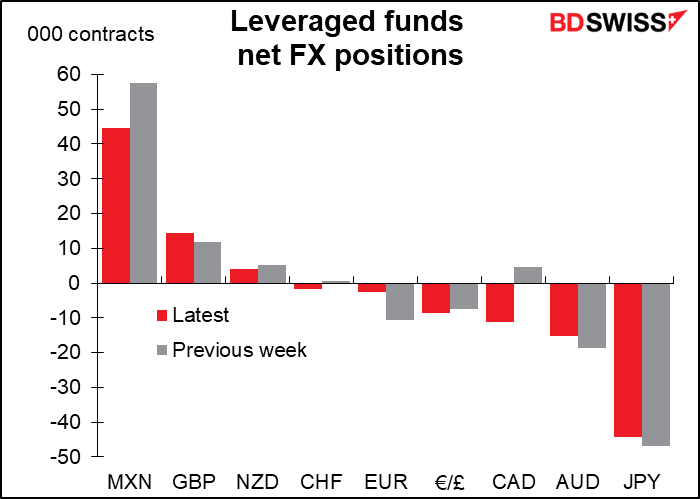 The professional community has really missed out on the surge in CHF. 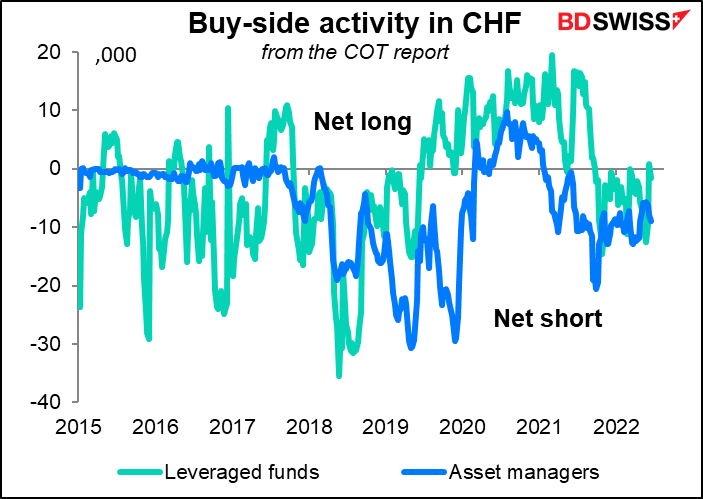 Retail weren’t particularly active – they too were negative on CAD, trimming their long CAD positions, while increasing short AUD but trimming short CHF (which is totally the wrong position nowadays, but never mind). 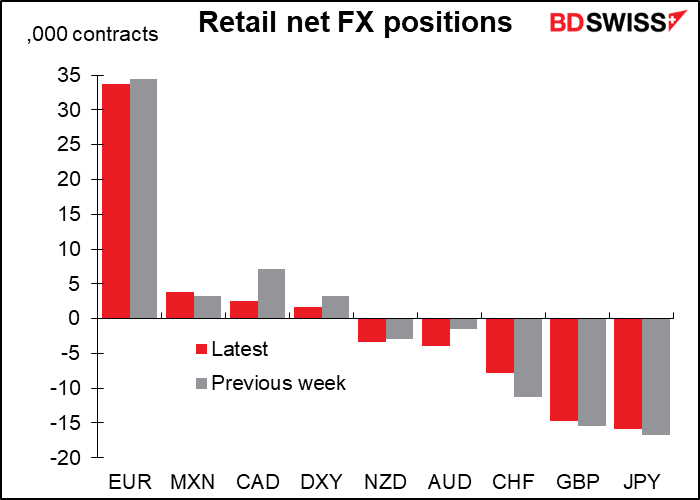 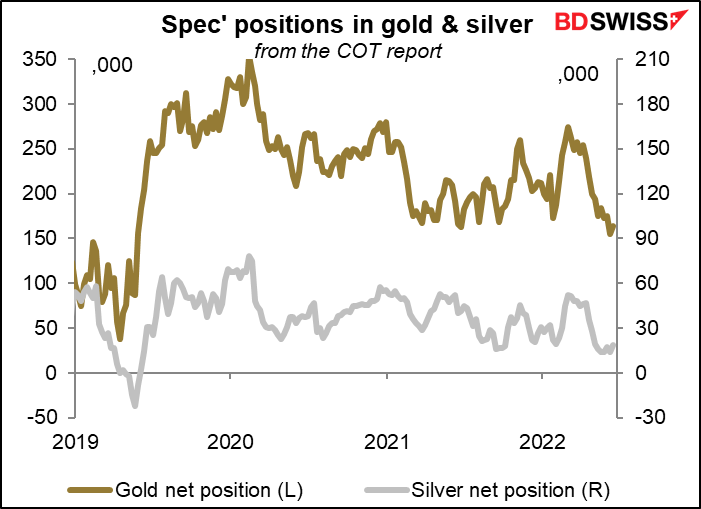 My home-made “risk appetite index,” derived from the COT report, showed the biggest “risk-off” mood since Nov. 2021. Maybe that explains the 3% leap in the S&P 500 on Friday – when everyone is bearish, that’s the time that a surprise can shift the market. 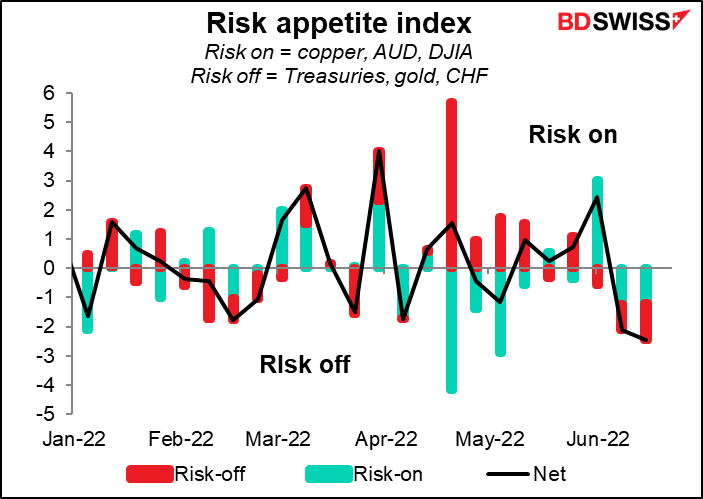 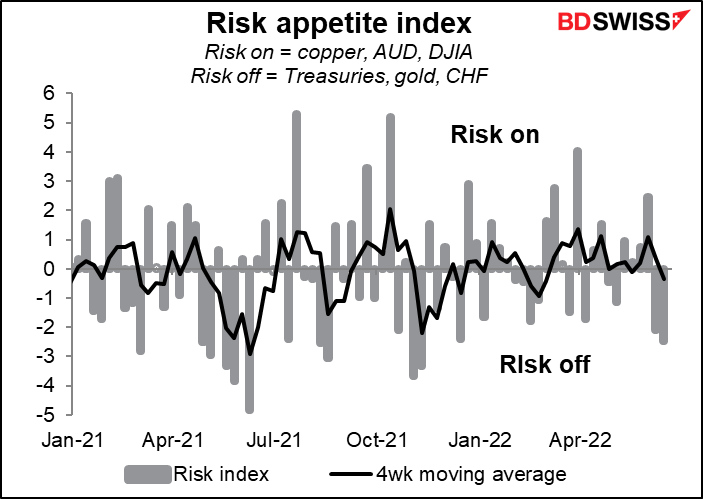 This index is comprised of three “risk-on” assets (the net position in copper, AUD, and the DJIA) and three “risk-off” assets (US Treasuries, gold, and CHF). We take the Z-score for each one and then add them up, reversing the sign for the “risk-off” indicators. 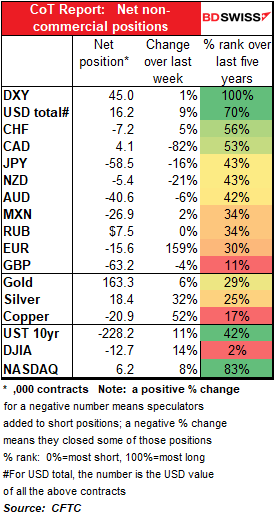 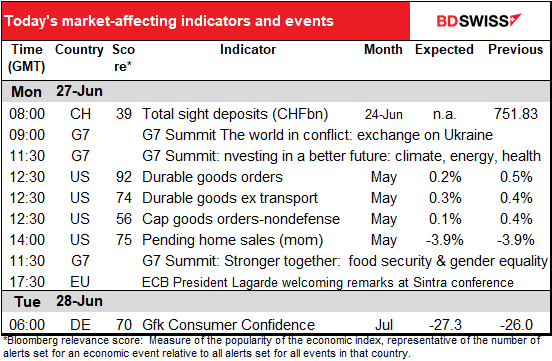 The focus today will be on meetings, not indicators. There’s the second day of the three-day G7 summit meeting. Germany  holds the G7 presidency this time and according to German Chancellor Olaf Scholz, host of the meeting, the aim is to send out a “powerful signal” demonstrating that “our strong democracies are aware of their joint global responsibility.”

The G7 consists of the US, Japan, Germany, France, Italy, the UK, and Canada, plus representatives of the EU. The heads of state & government are attending (including the European Union and European Council presidents). In addition, Germany invited five other democracies to attend: Argentina, India, Indonesia, Senegal, South Africa, and of course Ukraine, whose president unfortunately won’t be able to attend in person. A raft of international organizations, such as the UN, WHO, WTO, IMF, IEA, etc etc, are also participating, not to mention thousands of protestors who won’t be able to get anywhere near.

You can see the program (if you want) on the German G7 presidency website, but a better version is available from the EU. The exchanges on the war in Ukraine, energy, and food security could come up with some significant developments.  They’ve already announced an embargo against Russian gold (see above). Also US President Biden reportedly will announce that the US will provide an advanced surface-to-air missile system to Ukraine. The group is also going to discuss plans for rebuilding the country once the war is over.

Then in the evening, European Central Bank (ECB) President Lagarde launches the annual ECB Forum on Central Banking, held as usual in Sintra, Portugal. The subject this year is “Challenges for monetary policy in a rapidly changing world.” (That seems pretty generic to me; I mean, when hasn’t the world been changing rapidly over the last 100 years or so?) There will be a dinner speech on “Threats to financial stability.” The meetings are tomorrow and especially Wednesday, when there will be a panel discussion with Ms. Lagarde, Fed Chair Powell, Bank of England Gov. Bailey, and the head of the Bank for International Settlements.

Swiss sight deposits are showing a change in stance at the Swiss National Bank (SNB). They’ve fallen for four consecutive weeks. The latest week was the biggest drop since June 2020 (circled in the chart), which also came after a large series of increases in deposits (including two weeks of increases greater than CHF 13bn). The increases in March-May this year were much smaller by comparison and furthermore EUR/CHF is much lower, yet they’re letting deposits run down. To my way of thinking this confirms the change in the SNB’s stance that SNB President Jordan laid out at the recent meeting – they are allowing if not encouraging CHF to strengthen. 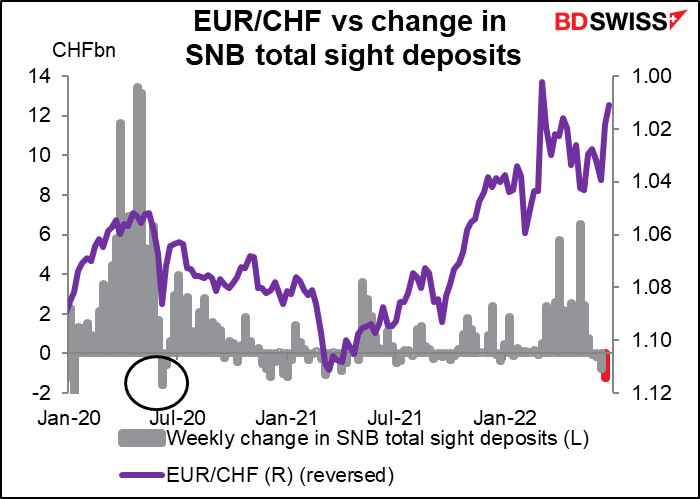 That’s all for Europe for today.

Once the US starts up, we’ll get the US durable goods orders. The headline figure is expected to be lower than recent months because of weak transportation orders. 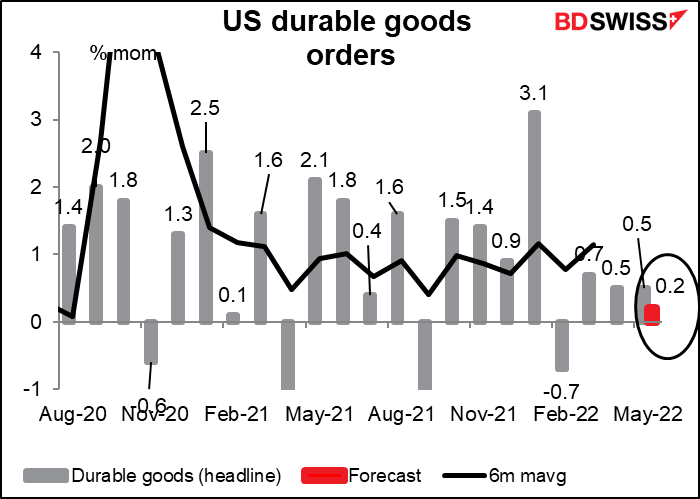 But even excluding transportation, orders are expected to be fairly weak. The durable goods figure is for May, but in June the S&P Global purchasing managers’ index (PMI) for new orders plunged 7.7 points, the third-largest monthly decline on record. (I don’t have a graph of this because they charge $30k a year for this detailed data – sorry.) “Forward-looking indicators, such as survey gauges of new order inflows and business expectations of output in the coming year, have fallen to levels indicative of the US and European economies contracting in the third quarter absent a sudden revival of demand,” according to S&P Global. (FYI S&P has bought IHS Markit, the company that produces the PMIs, and they’re now labeled the S&P Global PMIs.) This sharp downturn might not show up in the data for May yet, but wait until next month. 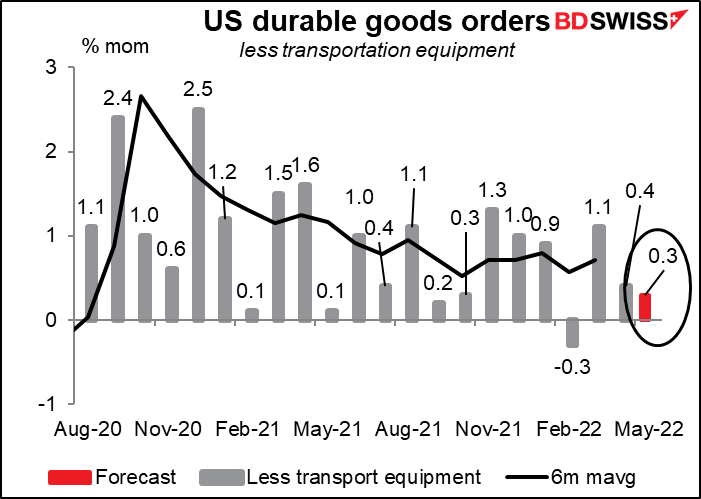 US pending home sales are the last of the housing market data to come out every month. They’ve fallen for six consecutive months and are expected to fall yet again, which probably wouldn’t surprise anyone, given the recent slowdown in housing (although Friday’s new home sales did surprise on the upside at +10.7% mom vs -6.2% expected). 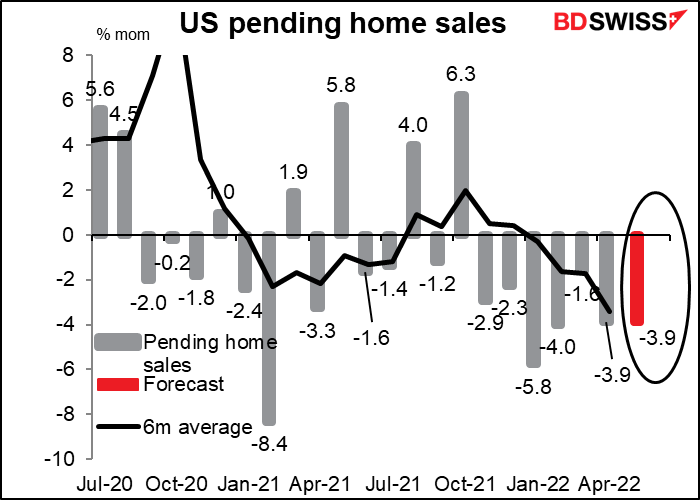 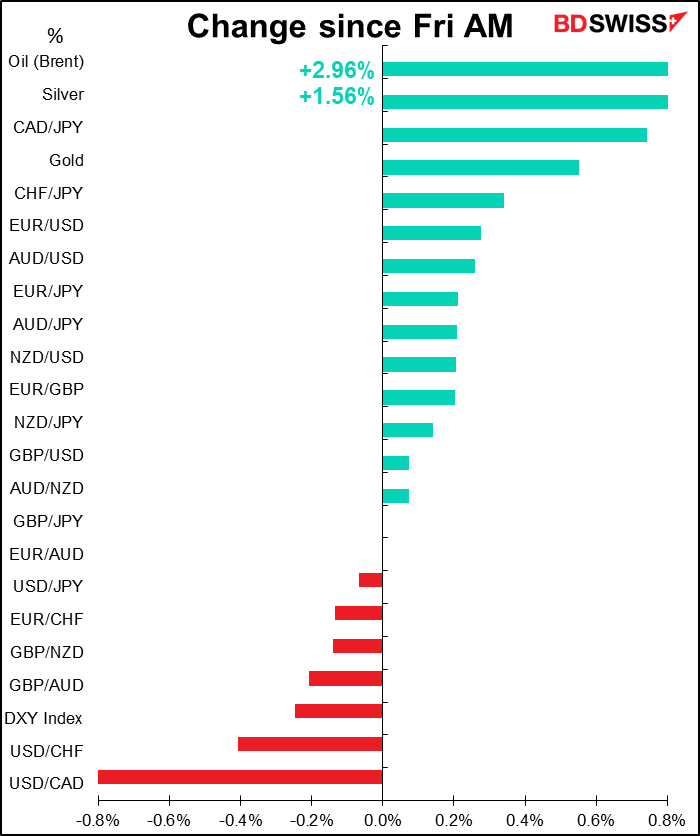 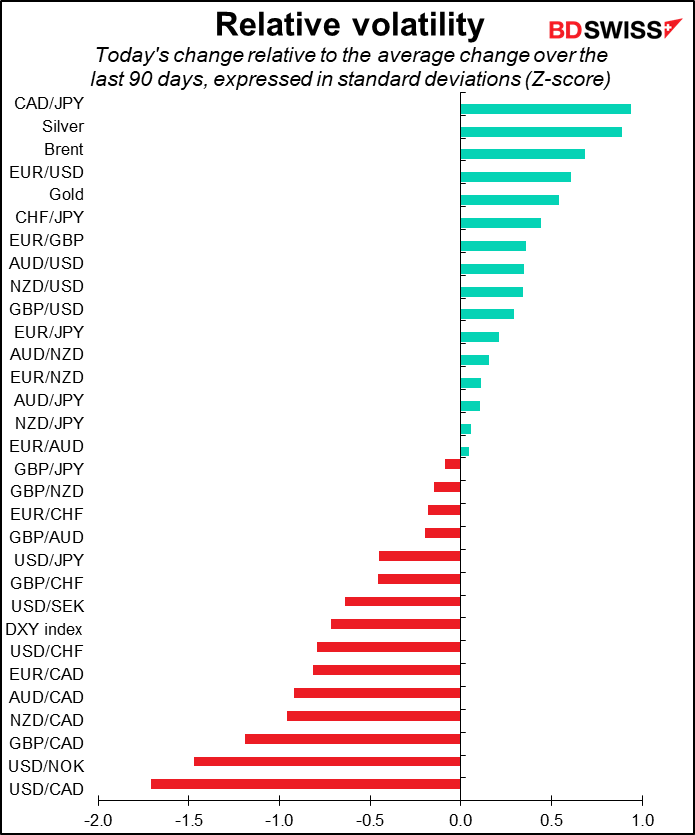 USD Up, JPY Down after stellar NFP changes US rate Expectations; quiet Day ahead

GBP Down as BoE forecasts Recession; US NFP

JPY Continues to Strengthen on thoughts of Weak US economy; JOLTS Report

BDSwiss Copyright © 2022 BDSwiss All Rights Reserved
Risk Warning: Trading in Forex/CFDs and Other Derivatives is highly speculative and carries a high level of risk.
Close
We use cookies to ensure that we give you the best experience on our website. If you continue to use this site we will assume that you are happy with it.Ok