The biggest increase was in long MXN, which is probably a bet that former VP Biden will win the election and improve relations with Mexico. 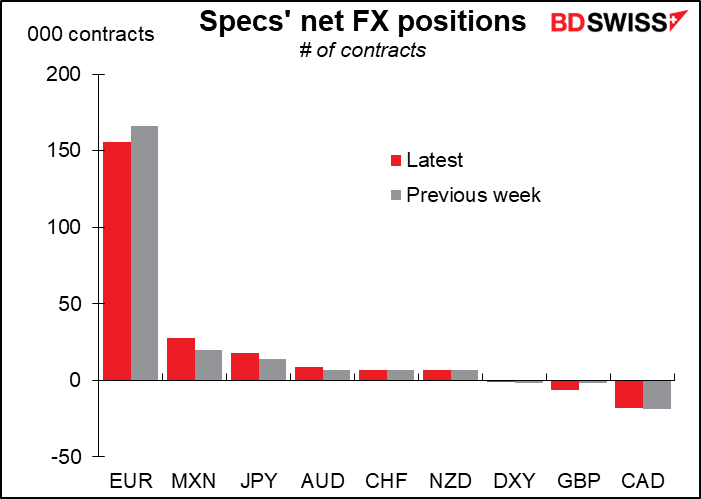 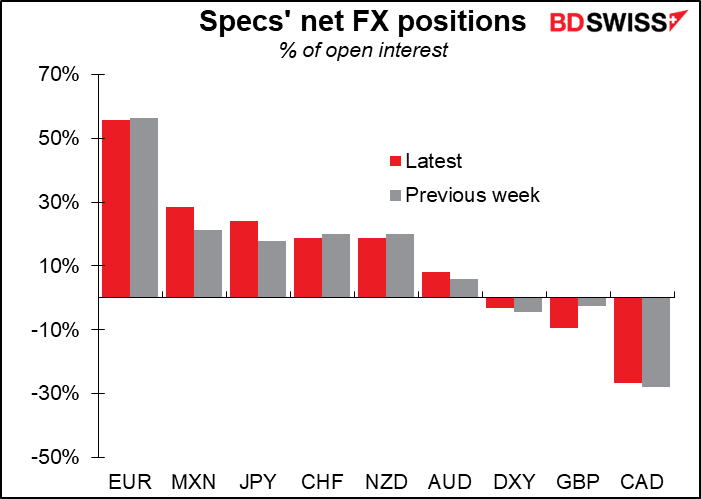 Overall, speculators have been reducing their overall USD short position recently. This has largely been achieved by cutting their EUR long, which is after all far and away their biggest position. But compared with a month ago, they’ve also cut their long JPY and reduced their short GBP positions significantly. On the other hand, they’ve also gotten significantly more long CHF and MXN. 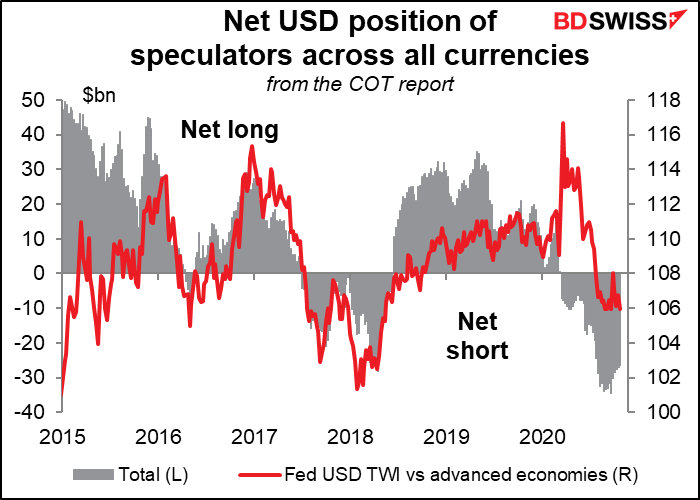 Their long MXN positions is still tiny relative to what it has been in the past, so there’s plenty of room for them to build on it. 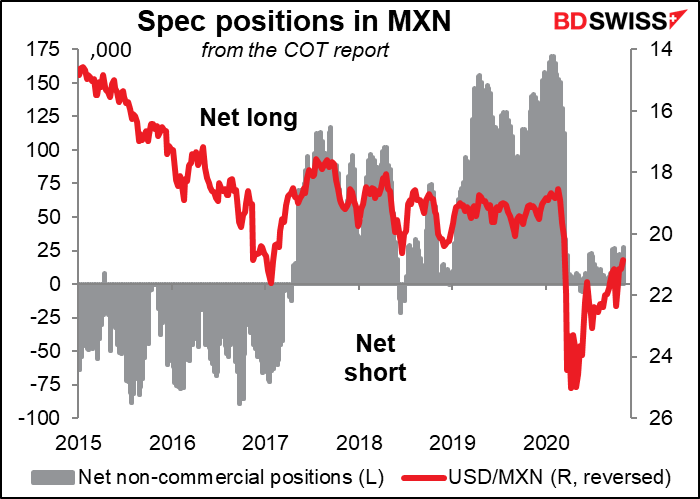 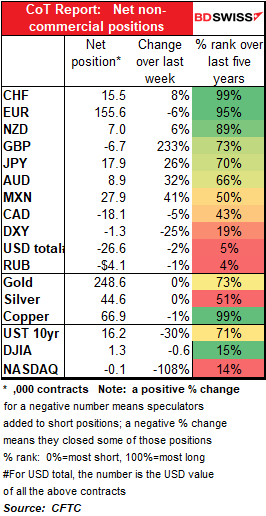 Hedge funds added to their long AUD positions, which were already their longest position. Do they know something about tonight’s Reserve Bank of Australia meeting that I don’t? They also cut their long GBP and their short CAD & JPY positions. They increased their long MXN positions but nothing major. 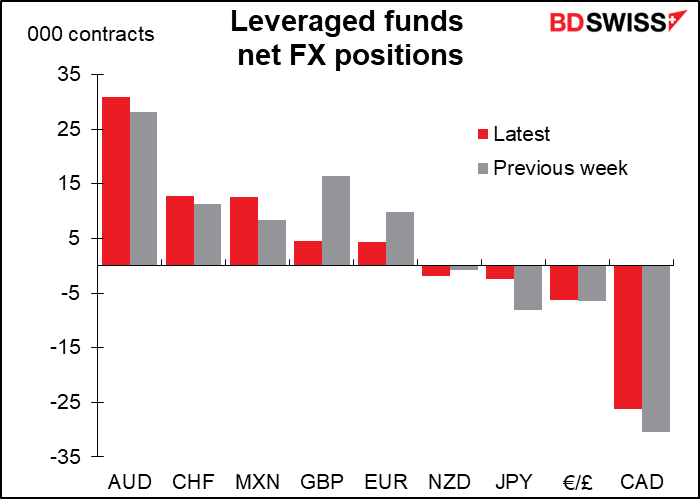 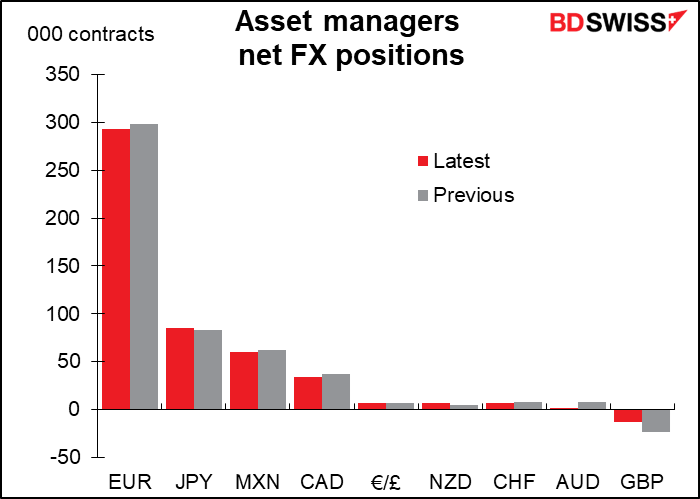 Retail investors too cut their long EUR positions, but they increased their long JPYs while cutting their long AUDs. Here too they cut back risk on GBP, nearly closing out their short GBP position (which wasn’t very big to start with). 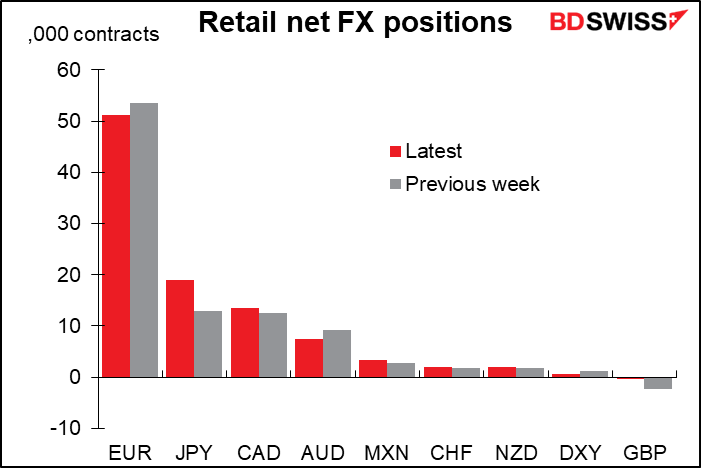 There were some unusually large moves in the risk reversals over the last week. The market must be looking for an increase in volatility, what with the US elections and the several central bank meetings this week.

The AUD/JPY and EUR/JPY risk reversals widened out considerably, indicating that people think JPY could gain on AUD and EUR. But the USD/JPY RR barely budged. On the other hand, the EUR/USD risk reversal almost went to zero from 0.46, indicating that people are less concerned about the euro rising vs USD and think it’s almost even odds which way the pair moves from here. AUD/USD and NZD/USD RRs also went further negative, indicating  concerns about AUD and NZD falling vs USD. 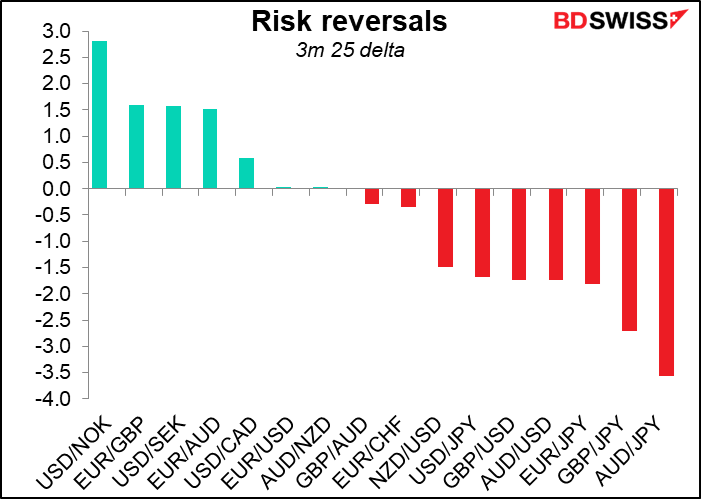 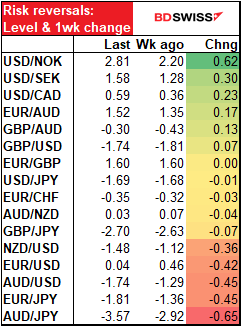 As mentioned above, the market is pricing in a sharp increase in volatility over the next week. The biggest change was in AUD/JPY, with AUD/USD and NZD/USD also seeing a big change. It’s notable that USD/JPY implied volatility doubled, but the risk reversal (above) barely changed. None of the pairs that I follow saw a decline in implied vol. 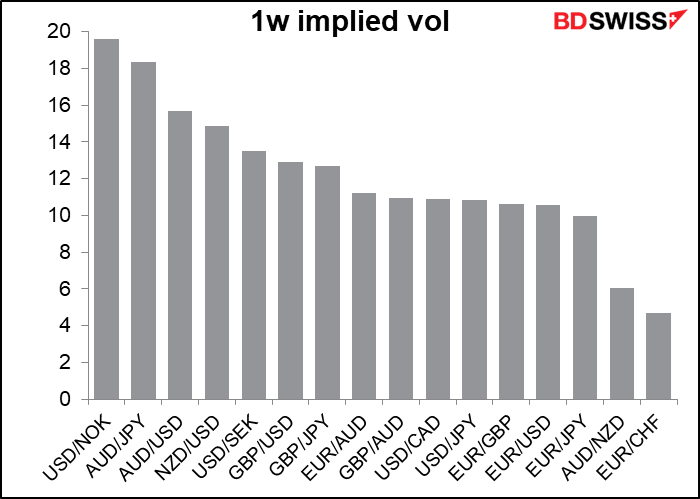 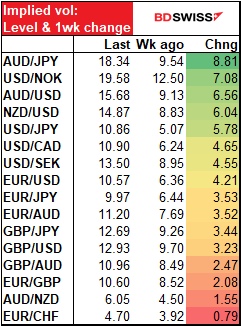 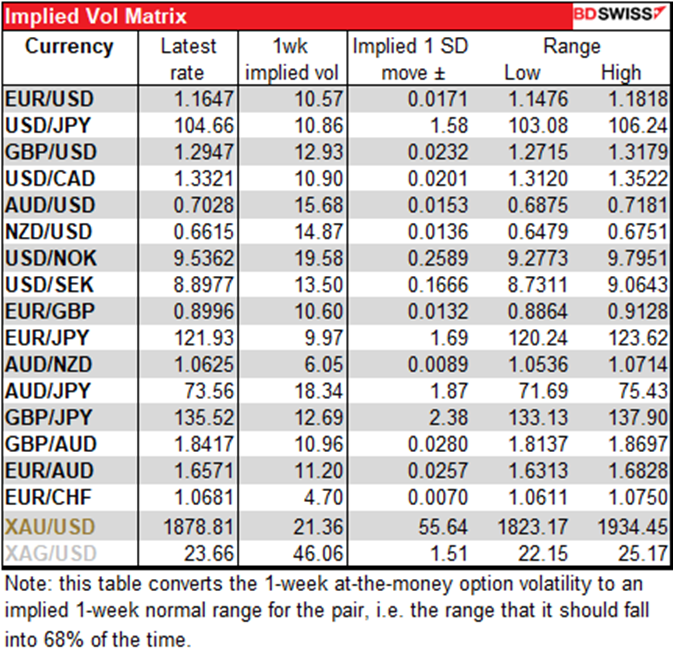 Speculators barely changed their positions at all in either gold or silver. 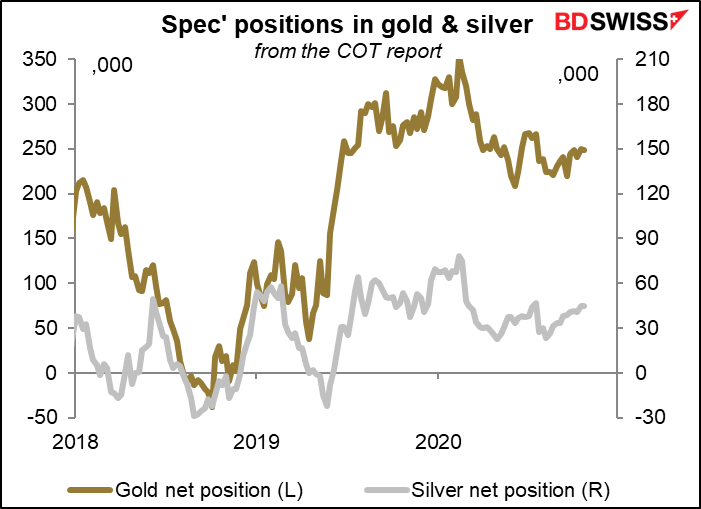 Retail investors on the other hand added to their gold positions (+7.4%) while cutting their silver a bit (-2.2%) 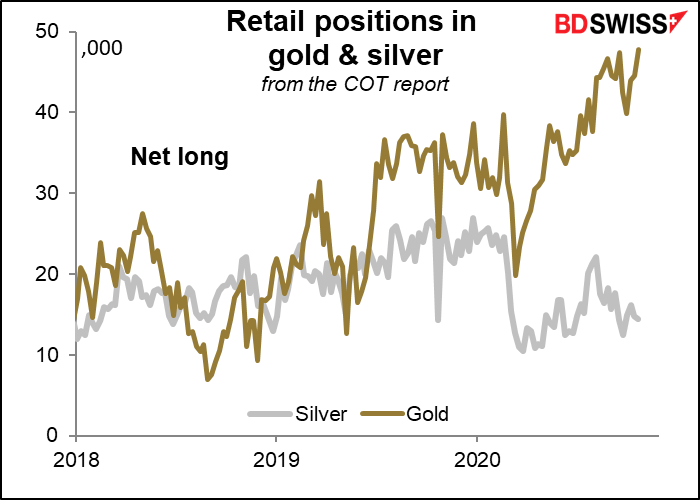 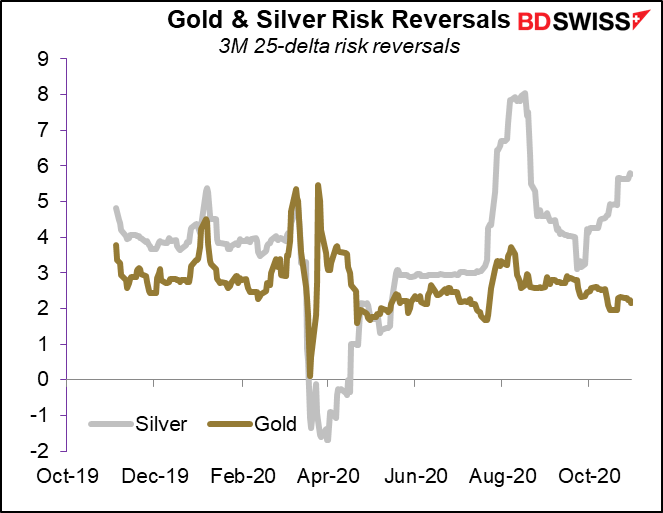 Even as stock markets had their worst weeks in several months last week, the S&P 500 and the DAX put/call ratios both fell while the NASDAQ put/call ratio stayed largely the same. This suggests that the market isn’t concerned that the week’s fall represents a major turning point. 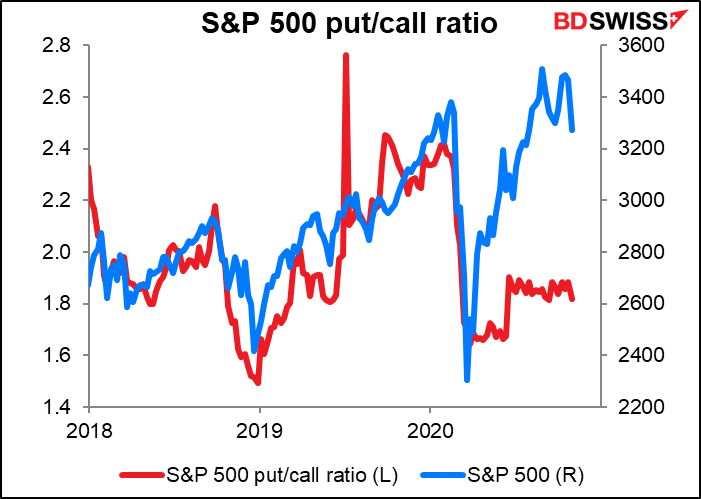 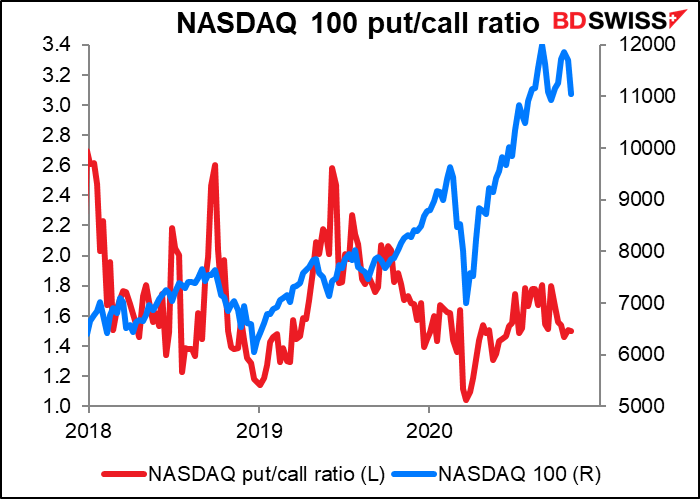 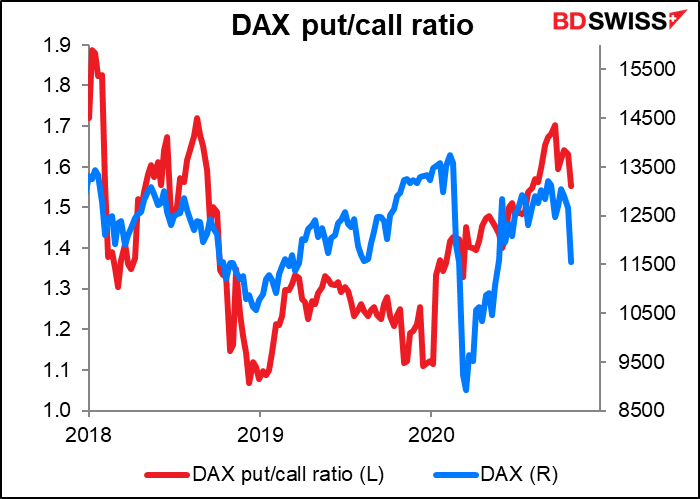 The AAII bull/bear ratio was at zero, which means the number of  bullish investors is exactly equal to the number of bearish investors. It’s oscillated around that level for the last three weeks. The AAII commented:  Optimism among individual investors about the short-term outlook for stocks declined modestly as pessimism rebounded…Bullish and bearish sentiment are tied for the first time since January 2019. Even though tied, optimism remains below average and pessimism remains above average. 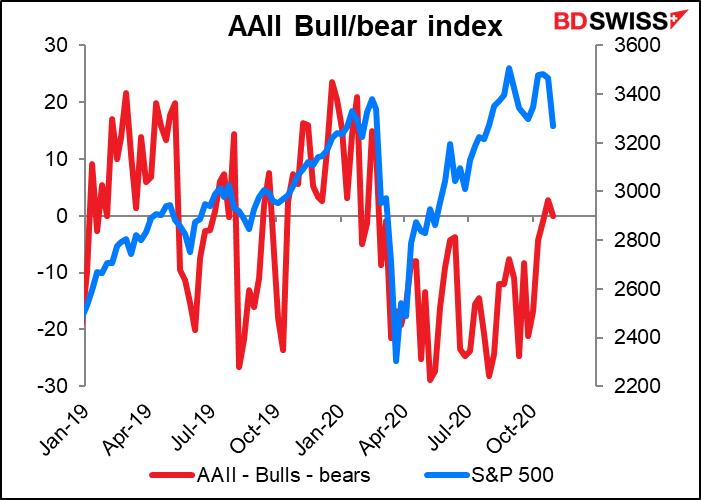