Tomorrow the European Central Bank (ECB) will hold its final meeting of the year on Thursday. Back in October, they as good as promised further action:

The new round of Eurosystem staff macroeconomic projections in December will allow a thorough reassessment of the economic outlook and the balance of risks. On the basis of this updated assessment, the Governing Council will recalibrate its instruments, as appropriate, to respond to the unfolding situation…

These are the main forecasts from September. 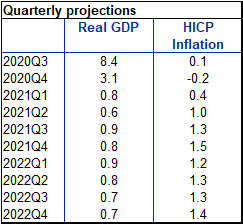 The new forecasts are likely to downgrade the outlook significantly. Q3 growth exceeded the ECB’s forecasts, but thanks to the reimposed lockdowns, Q4 is likely to show a contraction, vs the 3.1% qoq rise in activity the ECB was expecting. That will impact the growth outlook for 2021, if not beyond. Meanwhile, the Eurozone is in increasingly deep deflation, although inflation expectations have stopped declining recently. The new forecasts for inflation are unlikely to show it returning to the target level by 2023. 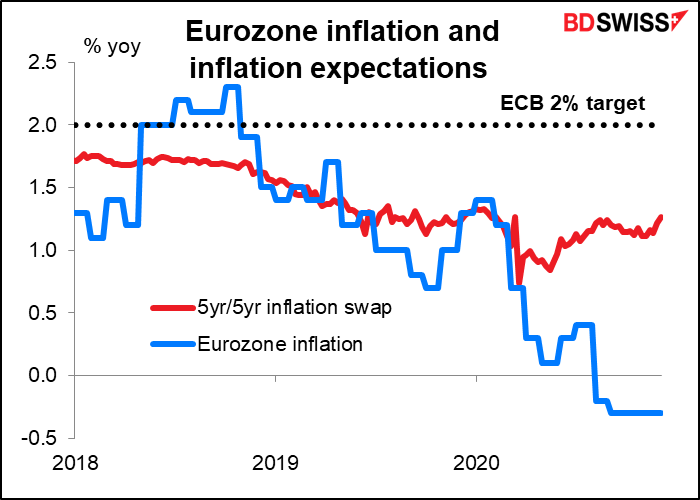 What is the ECB likely to do in response? Various officials have hinted that the Governing Council is more likely to adjust its extraordinary policy measures than to push interest rates further into negative territory. The market is look for them to “recalibrate” their two key pandemic tools of the Pandemic Emergency Purchase Program (PEPP),  which allows for flexible asset purchases, and the Targeted Long-Term Repurchase Operations (TLTROs), i.e. cheap bank funding to maintain easy financing for companies while the economic impact of the crisis continues. PEPP is likely to be extended by at least six months until end-2021 and increased by some EUR 500bn to EUR 1.85tn so that aid can continue at the current pace until activity returns to pre-pandemic levels.

Impact on the currency:  In general, quantitative easing measures such as these have more of an impact on the exchange rate than cutting interest rates by a small amount does. Cutting rates by 10 bps, which is all the ECB could do at this point, would have little impact even if it were deeper into negative territory. Further quantitative easing on the other hand could make foreign bonds even more attractive vis-à-vis EUR-denominated bonds and induce further portfolio flows out of euros, which might weaken the currency. However, in this case the moves are fairly well anticipated and so unless there’s a major surprise in the package, I don’t expect the euro to weaken significantly. We could even see some “sell the rumor, buy the fact” appreciation in the currency. 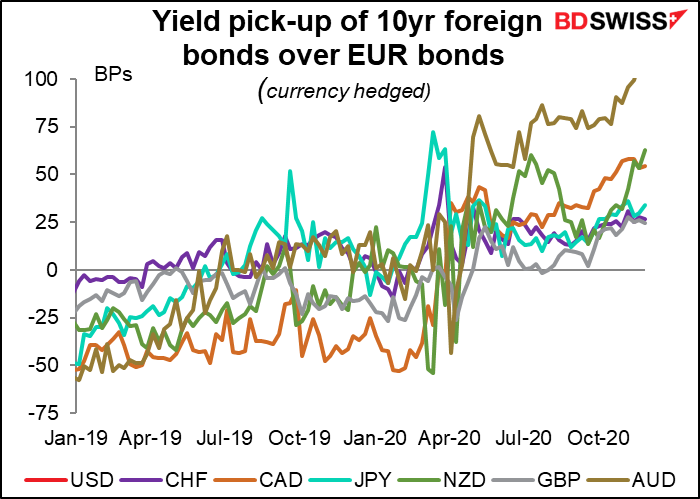 The question is, would the ECB care? ECB Chief Economist Lane started to voice his concern about the strengthening euro on 1 September, when EUR/USD first poked its nose above 1.20 (it hit a high of 1.2011 that day). He said that while the ECB doesn’t target an exchange rate, the exchange rate does matter for them. We then heard more and more comments from ECB officials about how the exchange rate impacts inflation, which had just moved into deflation in August. The September ECB press conference codified their new “mantra” on the issue as “the Governing Council will carefully assess incoming information, including developments in the exchange rate, with regard to its implications for the medium-term inflation outlook” (emphasis added). This mantra was expanded in October to include “the dynamics of the pandemic, prospects for a rollout of vaccines and developments in the exchange rate.”

But more recently we’ve heard little about the exchange rate even as EUR/USD has remained consistently above 1.20 for the last several days. That’s for good reason: it’s more of a USD move recently than an EUR move. EUR/USD is 3.25% higher than it was at the beginning of August, but the broad EUR nominal effective exchange rate vs 19 of the Eurozone’s major trading partners is a mere 0.50% higher, and no higher at all than when Lane spoke. There’s no point in the ECB trying to fight a weakening dollar.

I therefore think that the Council is not likely to emphasize the impact of these moves on the exchange rate. Without that additional emphasis – the signaling channel – I don’t think the move will have as much impact on the exchange rate as it would otherwise. 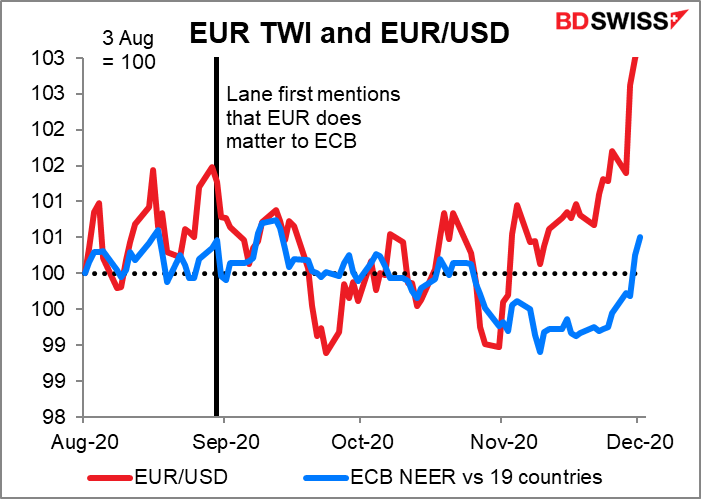 The fact is, the Eurozone consistently runs a current account surplus. It’s hard to argue your currency is overvalued when you’ve run a surplus for eight years. I therefore do not expect the ECB to emphasize the impact of these moves on the currency. 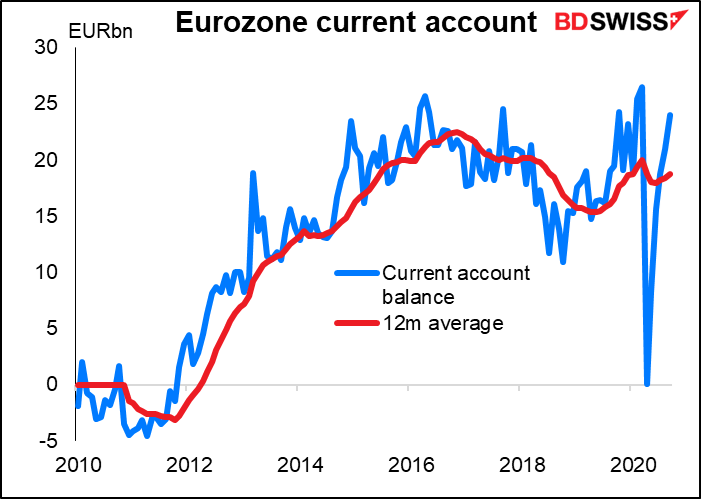 If they don’t emphasize the exchange rate and don’t come up with anything outside what’s already been discussed in the market, I think the measures are sufficiently discounted that there might not be much of an impact on the currency. That’s also because of confirmation bias – markets tend to interpret news as confirming what they want to do anyway. Right now EUR is in the ascendant and USD is declining. Markets are much more likely to act on news that confirms a bullish EUR stance and ignore or at least downplay news that argues for a weaker EUR. For example, the recent EU budget dispute with Poland and Hungary doesn’t seem to have done much to prevent EUR/USD from moving higher.

Nevertheless, it is clear that we sometimes do get unusually volatile markets on ECB days, particularly when they make some change to their monetary stance. We could have a particularly volatile day for EUR/GBP, given what’s happening on the GBP side as well. 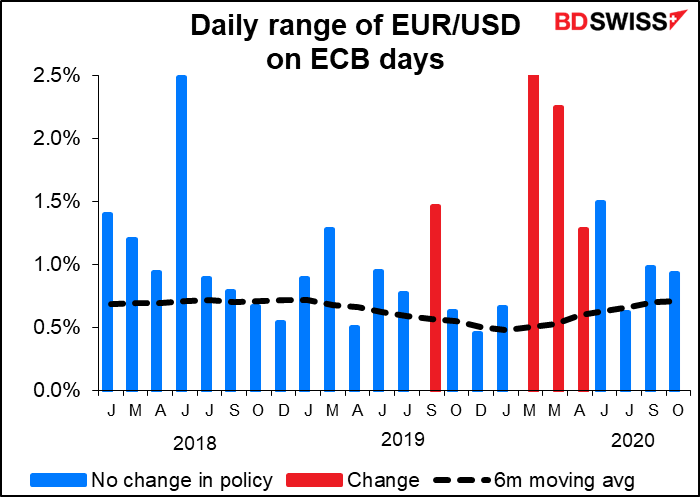 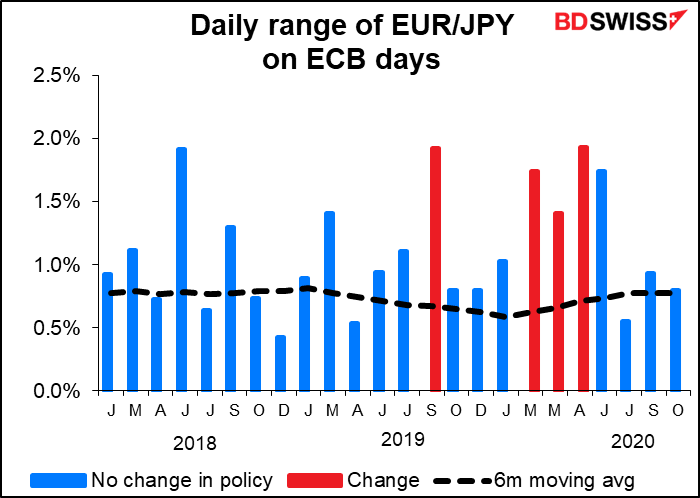 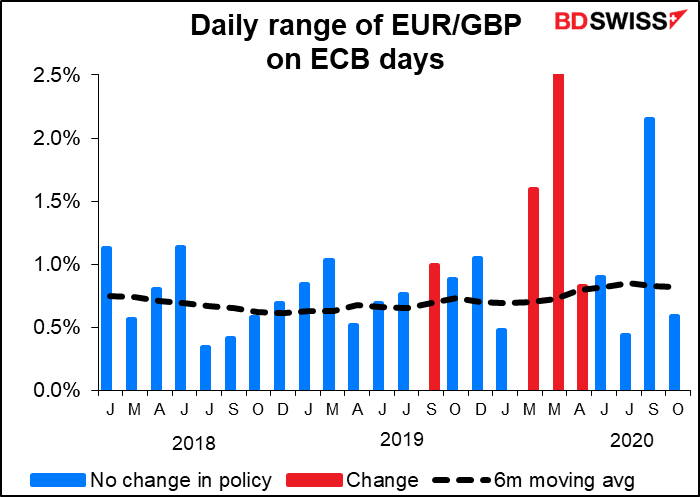 Whereto for the ECB after this? While the members of the Governing Council are almost certain to agree on the need for this package this time, they have different views on what will be necessary for the ECB afterward. We’ll have to wait to see how things develop, especially with the vaccine, before we can make any predictions about whether this is the last move or not.

In a recent speech (“Monetary Policy in Changing Conditions” 4 November), Isabel Schnabel emphasized the risks of too flat a yield curve and the difficulties in getting inflation back to target. She said excessive easing could erode bank profitability or creating a housing bubble that gives rise to financial instability. “These considerations point towards the eminent importance of fiscal policies at times of low interest rates and high uncertainty to lift the economy out of the low-inflation, low-growth trap,” she said. Schnabel is responsible for market operations on the ECB Council. Of course, what else would you expect from someone whose research has focused on financial stability and excessive risk-taking?

By contrast, Chief Economist Lane, in his speech on 26 November (“Monetary policy in a pandemic: ensuring favourable financing conditions”) warned of the risks of a steeper yield curve and the ECB’s responsibility to get inflation back to target. He argued that “…monetary policy continues to have a clear role to play in ensuring the preservation of favourable financial conditions. This will remain an essential priority even in the post-pandemic phase, given that the macroeconomic hit from the pandemic is likely to persist…” While he too acknowledged the importance of fiscal policy, he added, “monetary policy must act both to facilitate the necessarily-expansive fiscal stance and to minimise the crowding-out of private sector activity that would occur if high levels of public borrowing were transmitted to an increase in sovereign yields.”