The US Treasury  Department Wednesday labeled Switzerland and Vietnam as “currency manipulators” in its quarterly report on Macroeconomic and Foreign Exchange Policies of Major Trading Partners of the United States. The Treasury said that it would like to see the Swiss National Bank (SNB) step back from intervention and allow the CHF to appreciate in order to narrow the trade imbalance between the two countries. This is a monumentally stupid idea, mainly because the widening of the US trade deficit with Switzerland has nothing to do with the exchange rate. The SNB rejected the Treasury’s suggestion, but I think even their massive intervention can only slow the tide, not stop it, and CHF is likely to appreciate vs USD in any case. If EUR continues to appreciate vs USD as I expect, then EUR/CHF can stay the same or even move slightly higher and CHF appreciate further vs USD.

The US Treasury said Switzerland and Vietnam met its three criteria for this Scarlet Letter:  a material current account surplus, a significant bilateral trade surplus with the US, and persistent one-sided FX intervention.

The impact on each country’s currency depends on how the US would like to see the manipulation stopped. With regards to Vietnam, the Treasury focused on a range of policies that would bring the country’s systems and institutions in line with more developed economies and creating a more level playing field for foreign firms operating there.

With regards to Switzerland though, the recommendations focused on using fiscal and monetary policy instead of FX policy: more pro-cyclical fiscal spending and more domestic quantitative easing rather than relying on FX intervention. “Further franc appreciation would help facilitate gradual adjustment of Switzerland’s excessive current account surplus,” the report said. “…(W)e continue to urge the SNB to limit foreign exchange intervention to lean against large appreciation surges and allow real appreciation in line with the long-term trend.”

That would of course mean a stronger CHF. The currency initially gained following the release of the report, but a strong rebuttal by the Swiss National Bank sent it down again. The SNB stuck to its guns at its regularly scheduled meeting on Thursday, simply repeating its usual comment that ““In view of the fact that the Swiss franc is still highly valued, the SNB remains willing to intervene more strongly in the foreign exchange market, while taking the overall exchange rate situation into consideration.”

Does Switzerland manipulate its currency? Well, no one can deny that it tries. It has the third-largest stock of foreign reserves of any country in the world, and #1 and #2 are much much bigger economies (China and Japan). Given that China is a $14.9tn-a-year GDP country, Japan is $4.9tn, and Switzerland is $708bn, the gap is astonishing: China’s foreign exchange reserves amount to 21% of GDP, Japan’s are 27% of GDP, and tiny Switzerland is 134% of GDP. 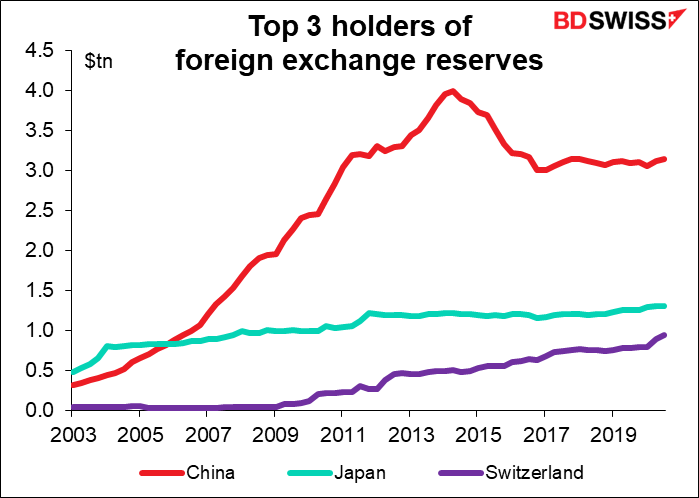 However, if it is a currency manipulator, it’s not a very successful one. The Swiss franc has been overvalued vs the dollar on a purchasing-power-parity (PPP) basis almost uninterruptedly since around 1987 and vs the euro since the single currency’s inception. 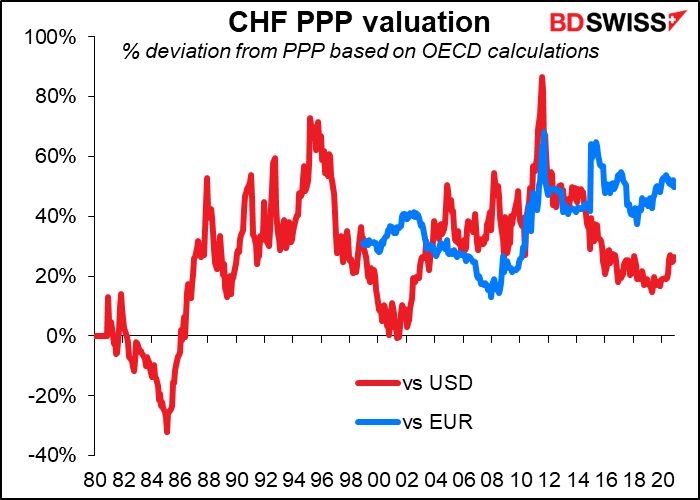 Using the well-known “Big Mac” PPP calculation, which covers some 30 currencies, it’s the most overvalued major currency in the world. 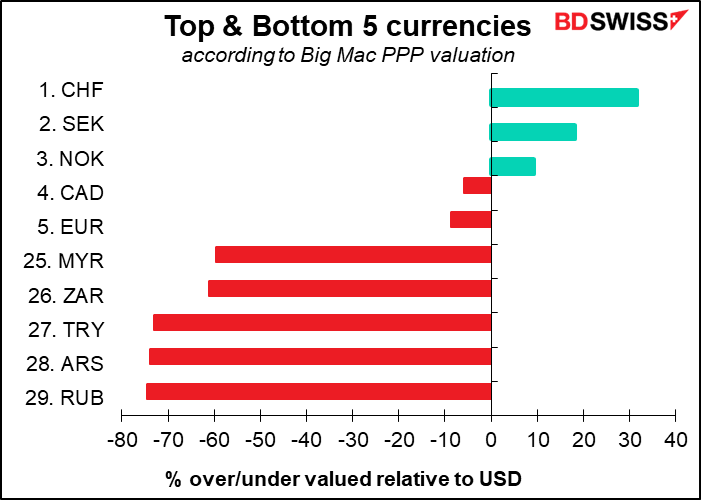 This picture was taken in Geneva in January 2015, right after the collapse of the EUR/CHF floor. A Big Mac was CHF 11.70 then. My daughter who lives there reports that it’s still the same price. 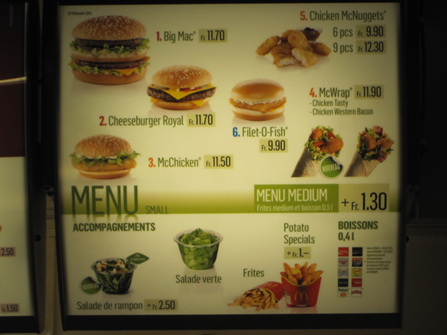 The currency was appreciating steadily against EUR, but with the recent surge in the value of EUR, CHF has weakened a bit vs EUR. Nonetheless CHF has steadily appreciated vs USD. 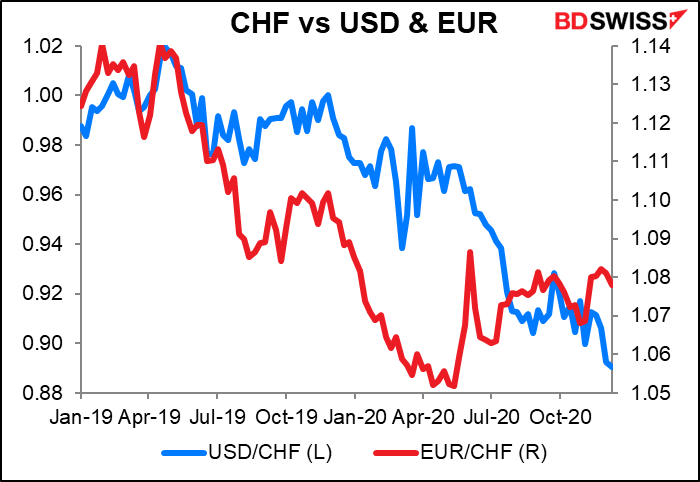 Despite this grossly overvalued currency, which makes everything in the country preternaturally expensive, the country still has a tremendous current account surplus, the third-largest in the world (outside of a few oil exporters) as a percent of GDP. It appears people are still willing to buy Toblerones and Rolexes despite the overvalued exchange rate.

The problem is, the private sector can’t recycle the inflows totally by itself. There’s just a limit to how much Apple stock, negative-yielding Bunds, or other foreign investments the private sector wants to hold. In that case, the government has to take on the foreign exchange risk and recycle the surplus lest the success of the exporters put the rest of the domestic industry out of business. 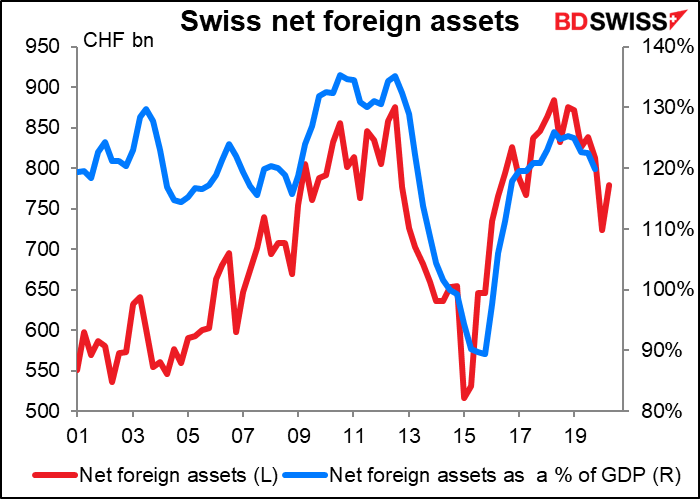 With the country still mired in deflation despite the lowest interest rates in human history, there’s little else the country can do to prevent prices from falling further (although some might say that prices in Switzerland should fall, but that’s another matter.) The small size of its domestic bond market – at 11% of GDP, Switzerland’s debt/GDP ratio is probably the lowest in the world outside of microstates or oil exporters – makes it impossible to use alternative monetary tools such as quantitative easing. (Besides, ask the Japanese how effective that’s been at getting inflation back up.) 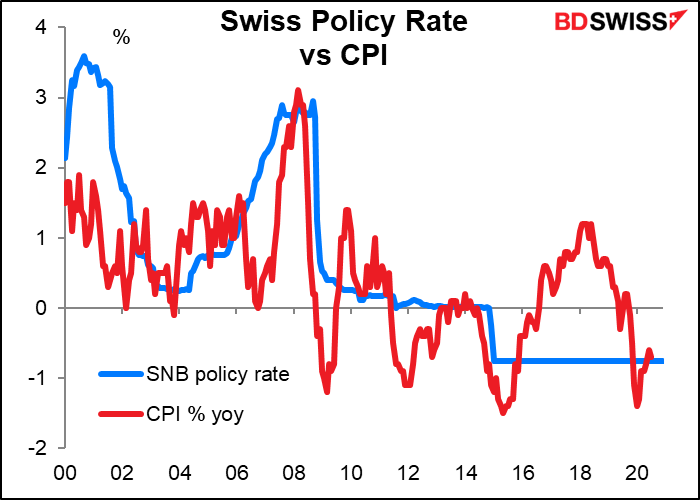 The SNB was unmoved by the Treasury’s accusation. It denied “any form of currency manipulation” and said it “remains willing to intervene more strongly in the foreign exchange market.” “Foreign exchange market interventions are necessary in Switzerland’s monetary policy to ensure appropriate monetary conditions and therefore price stability,” it added.

Swiss sight deposits, a commonly used proxy for intervention, have declined for the last four weeks in a row, but this seems to be a seasonal pattern as it occurs almost exclusively in December. I therefore don’t think it represents a change in policy. 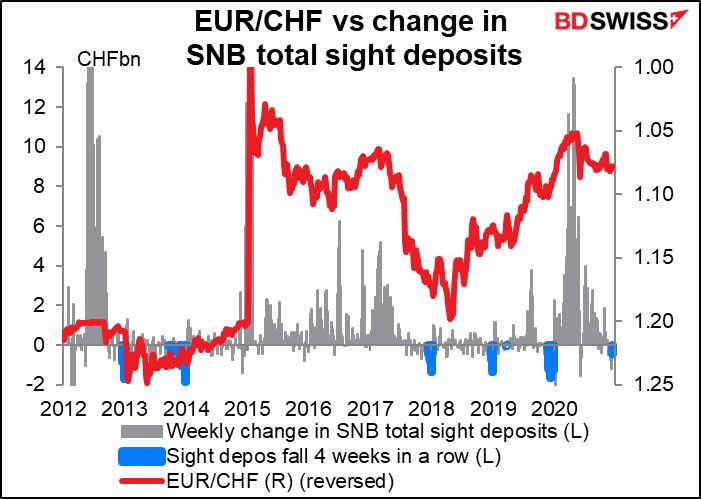 Really, I don’t see why the US is bothering with this. First off, Switzerland’s intervention isn’t even aimed at keeping CHF stable vs USD – it’s aimed at the Eurozone, which accounts for 42% of Switzerland’s trade, vs 11% for the US. Secondly, Switzerland is a tiny country that accounts for only 5% or so of the US trade deficit. It seems to me that the US should have bigger and more appropriate fish to fry.

But most importantly, it looks to me like a lot of the US complaint is just nonsense. Much of what looks like current account transactions should actually be reclassified as financial account transactions that the US Treasury should ignore. The report says that the US goods trade deficit with Switzerland “widened notably over the last year…due partially to an increase in Swiss gold exports in the first half of 2020.” As the graph shows, that’s exactly what happened:  Switzerland’s trade surplus with the US exploded from an average of $2.1bn a month in the six months to February to $6.7bn a month in the following six months. But apparently, what prompted the change was gold bullion that’s being held as a financial asset. It shouldn’t be included in the current account to begin with, but rather in the financial account, because it’s a financial asset like stocks or bonds. The IMF’s Balance of Payments handbook hasn’t caught up with this issue yet, though. (Britain has the same problem. A year ago it flipped from an overall trade deficit to a trade surplus simply because a US bank reclassified the ownership of gold bars stored in its vault in London.) Appreciation of the CHF, quantitative easing, increased fiscal stimulus…none of it will make a shred of difference to Swiss gold exports (which in any case are denominated in dollars anyway.) 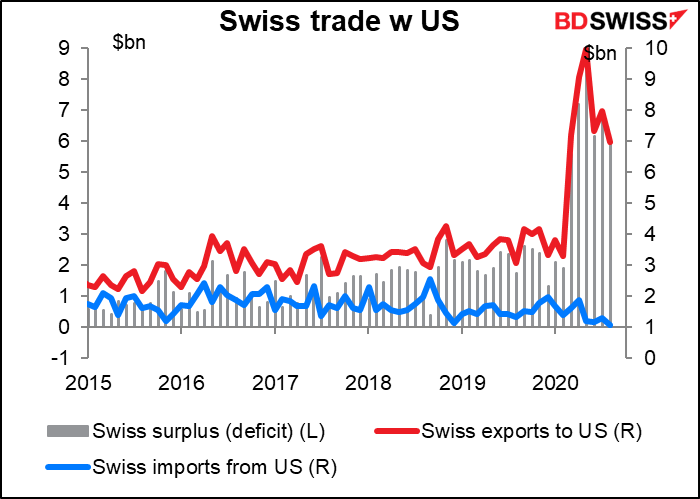 In fact, let me say:  this is just so stupid, it must have come from the Trump administration. The Obama administration never made much of a fuss about Swiss intervention even when the SNB maintained a fixed exchange rate vs EUR. I expect that the whole issue will quietly disappear once the Biden administration comes in.

That doesn’t mean I expect CHF to weaken vs USD. The SNB’s intervention is aimed at EUR/CHF, not USD/CHF. As the graph shows, recently EUR/CHF has moved higher (i.e. CHF has weakened vs EUR) even as USD/CHF has continued to move lower (i.e., CHF has strengthened vs USD) because EUR has been rallying vs USD. I expect to see EUR appreciate further vs USD in 2021 and therefore we may see more of the same with regards to CHF. Whether the SNB manages to keep EUR/CHF or weaken CHF vs EUR or just slow its currency’s appreciation, CHF may well be able to appreciate further vs a weakening USD. 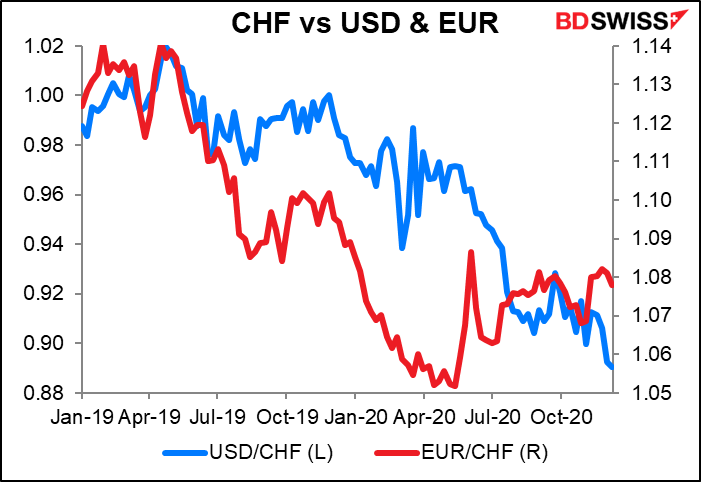