After three consecutive weeks of increasing USD shorts, the CoT report showed that speculators cut their USD short positions somewhat. But it’s hard to say that they are less pessimistic for the US currency because they also increased their short DXY position, although not by as much. 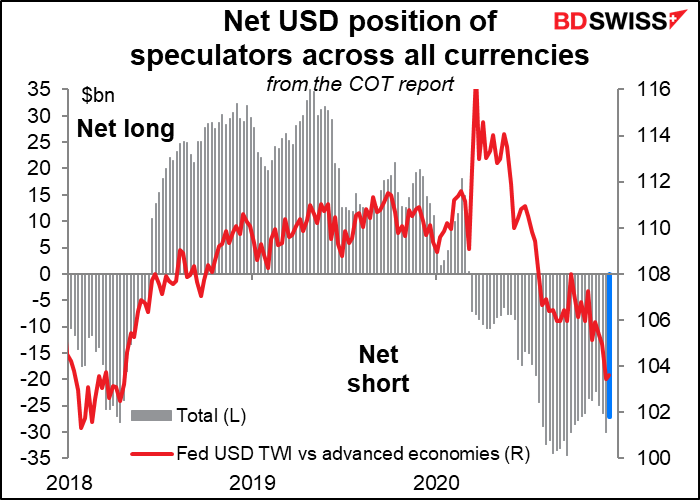 The most noticeable change was that they flipped from long MXN to short. Elsewhere, they cut their long EUR, JPY and GBP positions. But at the same time they reduced their short AUD and CAD positions and increased their long NZD, which is all told a “risk-on” move.

At this point in the year it’s hard to tell whether they are taking a view on currencies or simply cutting back positions before going on holiday. 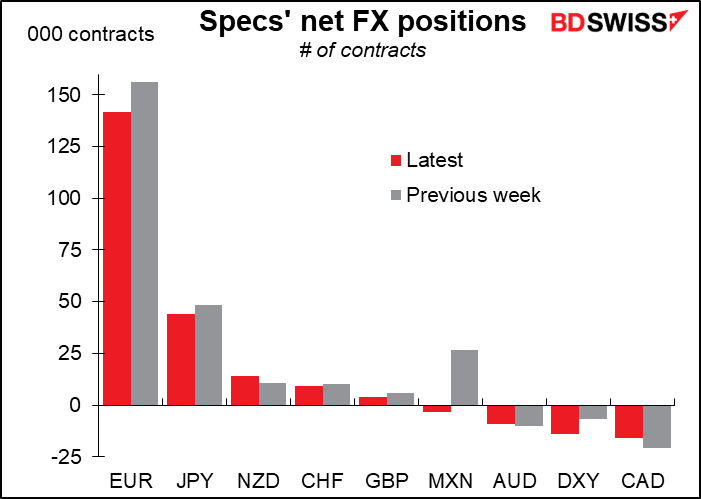 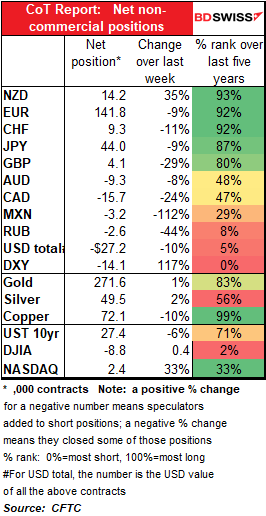 Hedge funds cut their long MXN position, although it’s still their biggest long, in contrast to the specs, who went short the currency. They added to EUR longs this week but cut most other positions, reducing both long AUD, JPY, and CHF, as well as reducing short GBP and NZD. Their CAD position was little changed. This looks like a general move to reduce risk across the board rather than taking any view on the currencies. 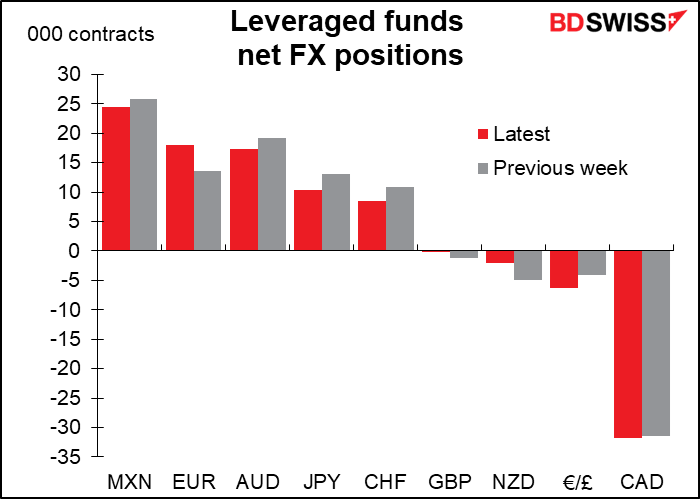 Retail investors were also bullish the commodity currencies – they raised their CAD, AUD,  and NZD positions. Unlike the specs, who generally cut their positions, the only ones retail cut were CHF and MXN. And they flipped from long DXY to short. 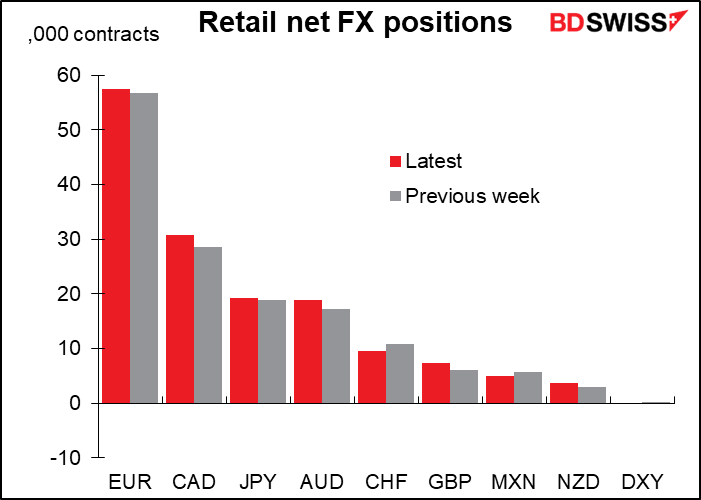 Once again it was the GBP RRs that moved the most during the week, but this time they contracted, i.e. showed less demand for protection against a GBP fall. This may indicate greater confidence in a positive outcome to the talks, or it may just mean that people think a negative outcome is already priced in – the fact is, the RRs are still priced for protection against GBP downside, indicating that that’s the greater fear of the investment community. 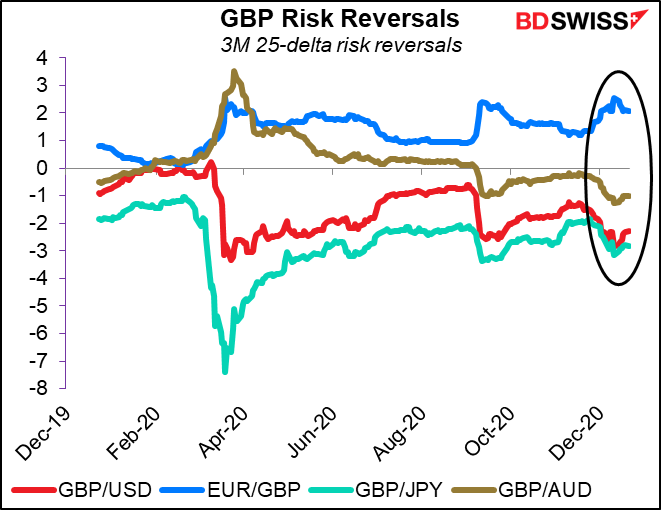 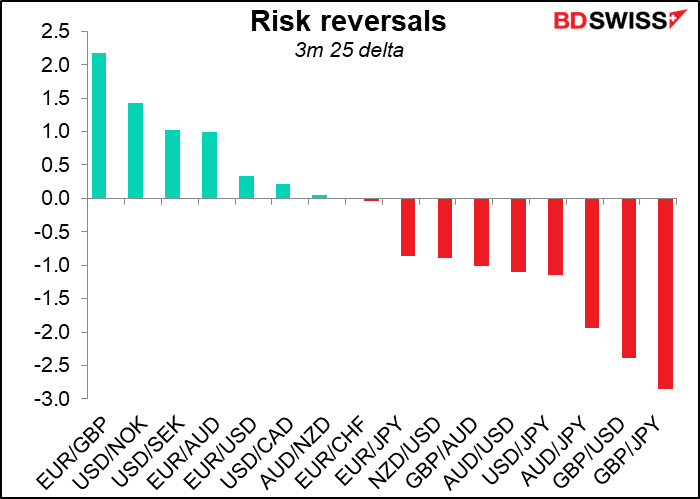 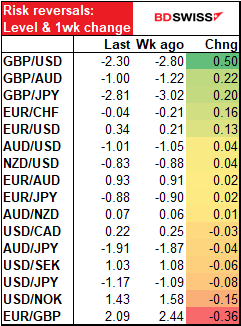 Implied Volatility: up for GBP, down for others 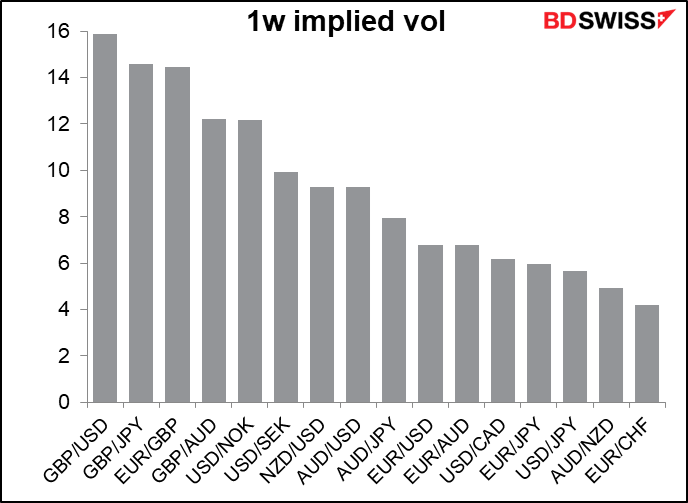 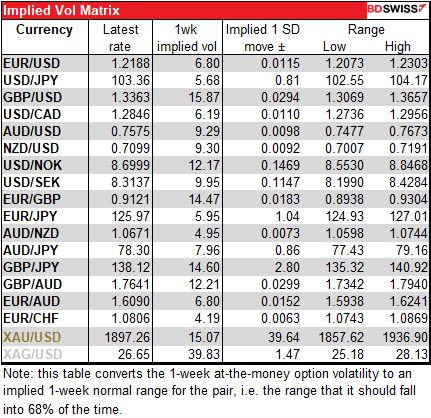 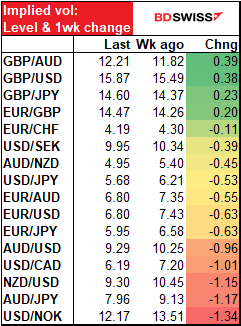 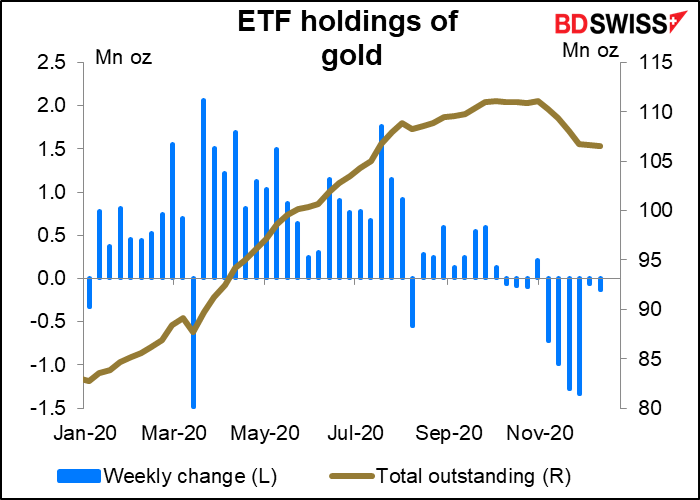 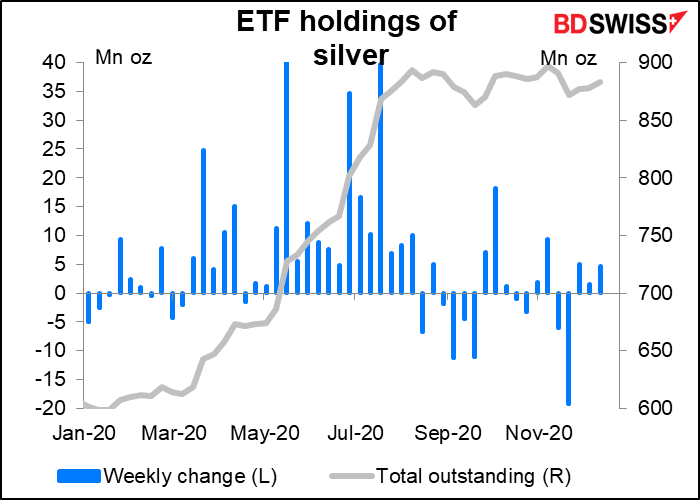 Such different trends are not unusual. There is no consistent relationship between the changes in holdings between the two markets. 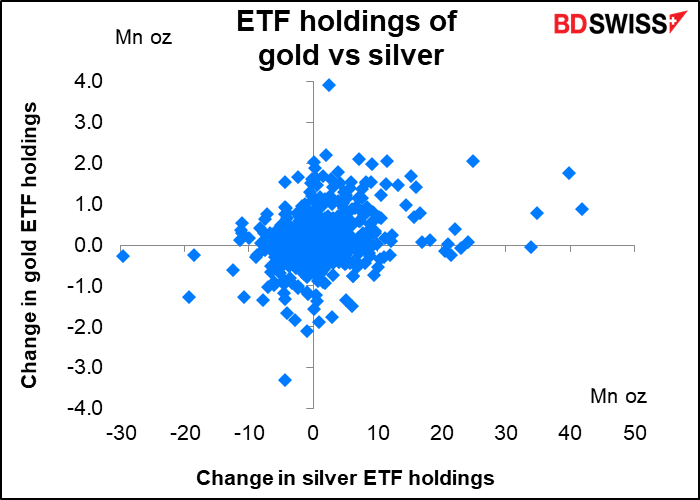 Speculators increased their long positions in both metals. 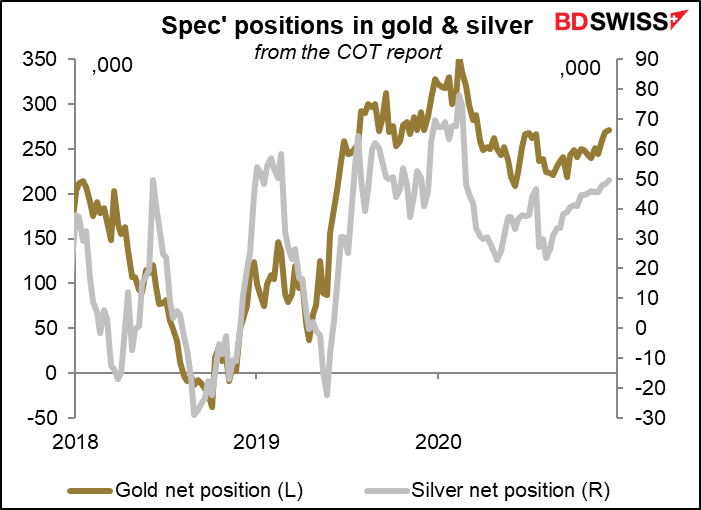 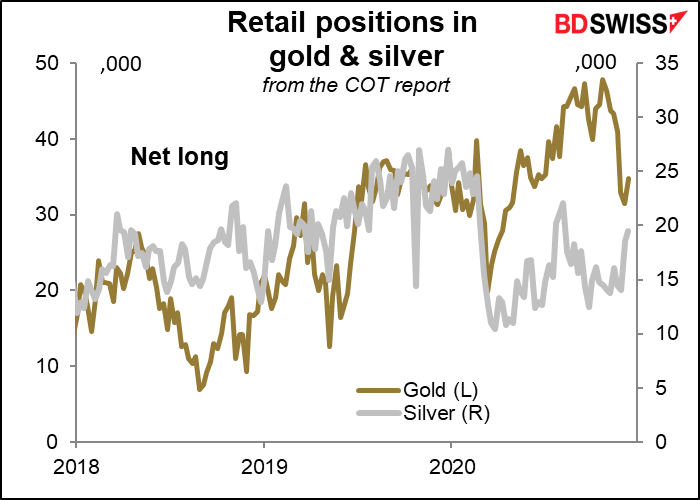 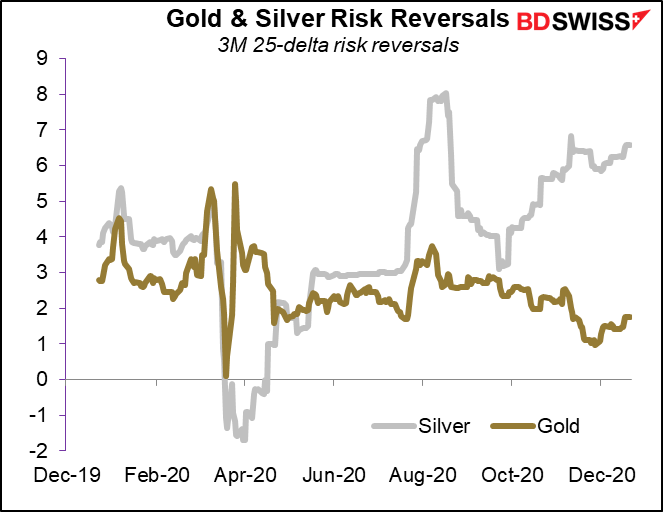 The CBOE’s composite put/call ratios for the US markets fell, both for all options and for index options alone. This indicates less worry about a fall in the market. 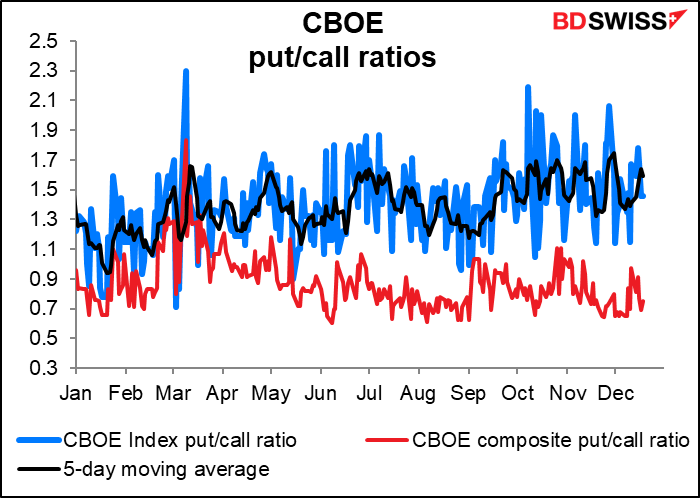 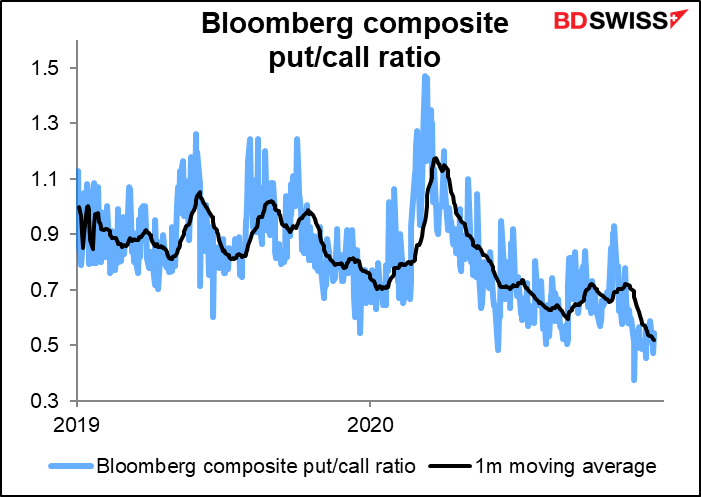 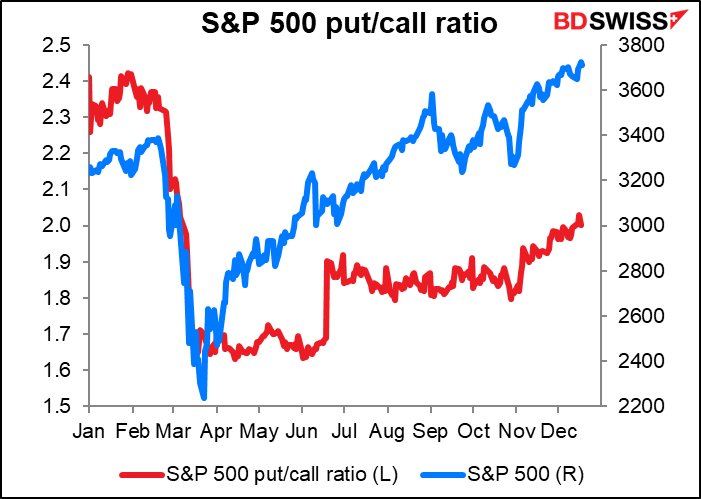 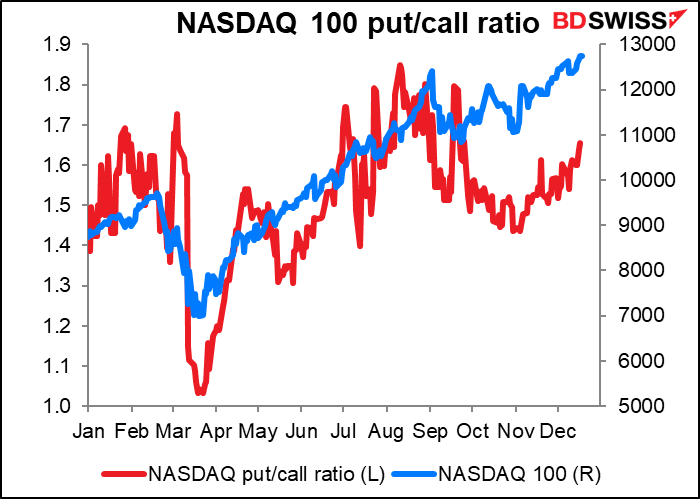 The DAX put/call ratio was unchanged. 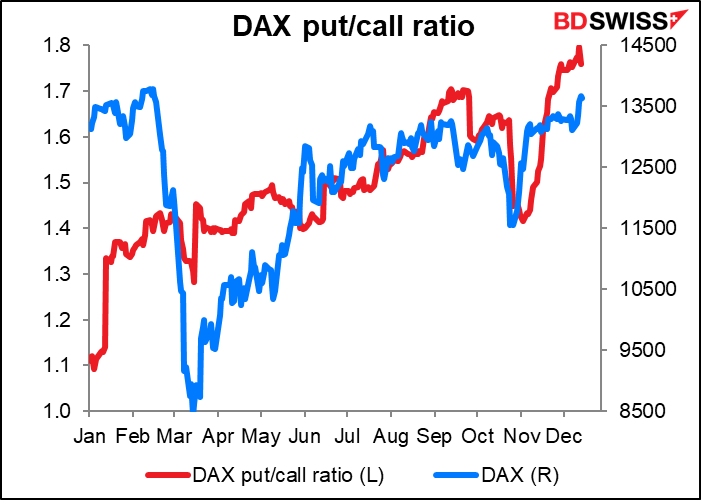