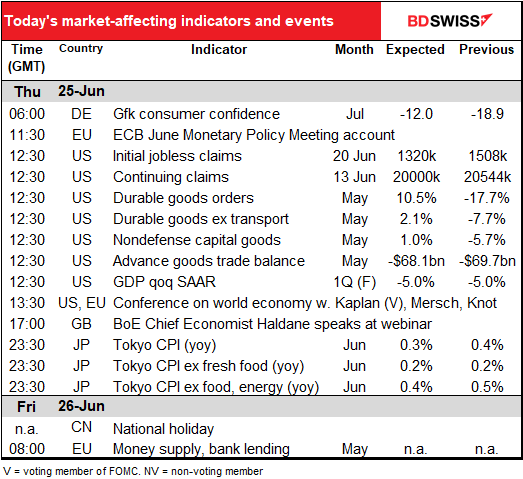 People are getting worried about the virus again. It seems that the “second wave” has arrived even before the first wave subsided. The US and, increasingly, Brazil, are the main hotspots, but the number of new cases is rising elsewhere in the world as well. 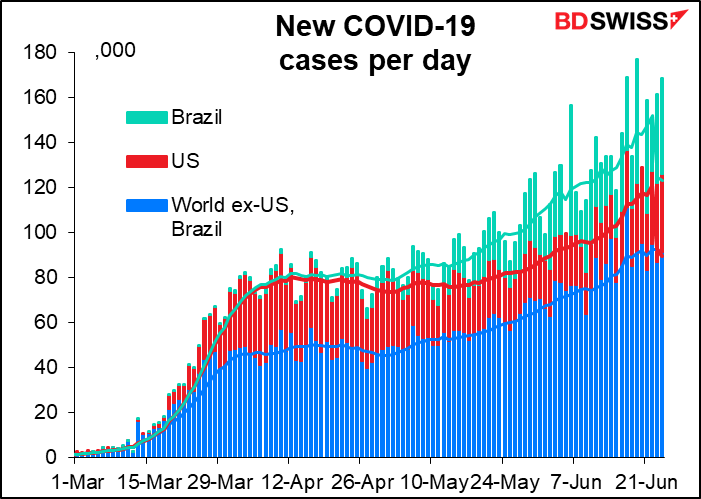 In the US there are now 36 states & territories where the latest seven-day average is higher than a week ago, vs only 16 where it’s lower. Although more Democratic states are seeing increases than Republican states (19 to 17), the new cases are 61% in Republican-held states. Texas (population 29mn, 2nd largest in America) is a particular problem; the mayor of Houston, its largest city, said intensive care units were 97% filled. Meanwhile, forget about the Schengen area; New York, New Jersey, and Connecticut all announced that they will require visitors from out-of-state to self-quarantine. 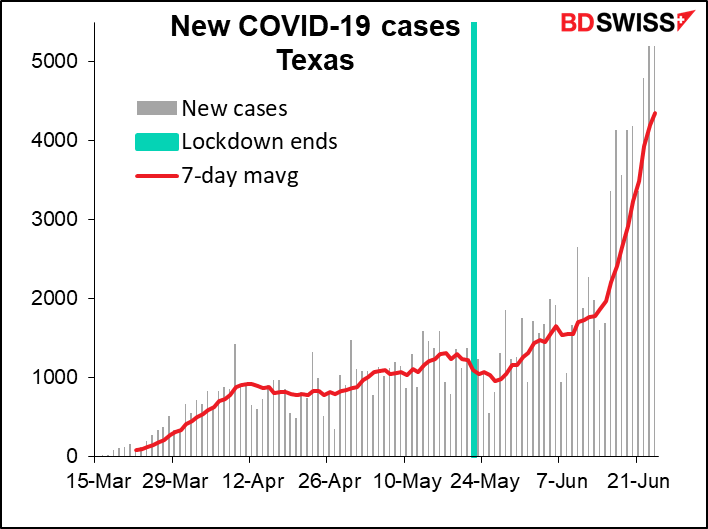 Amazingly, USD was the best-performing currency as it recouped Tuesday’s losses despite the growing virus problems in the US. I’m not sure whether this was the ultimate “flight to safety,” a vindication of the “dollar smile” theory (which says that the dollar outperforms when things are really good and really bad, and underperforms during normal times). Or it could be the beginning of month- and quarter-end flows. Or a bit of both.

Elsewhere, it was a typical “risk-off” performance in the FX market as stocks fell and the International Monetary Fund (IMF) revised its global GDP forecasts downward. It now sees a deeper global recession, with the world economy shrinking 4.9% this year vs its previous projection of -3% in March. Still, that’s probably less than the amount that governments and central banks are pumping into their economies (I haven’t run the numbers yet so I’m not sure about this).
Against this weaker background, the commodity currencies generally fell while CHF and JPY held up best against the stronger dollar. Oil was down and both CAD and NOK (not shown) fell. Fitch downgraded Canada’s credit rating from AAA to AA+ with a stable outlook, citing the government’s increased borrowing to support the economy during the pandemic (something that applies to every country everywhere, but never mind).
EUR gained on the crosses on a Reuters story that the ECB was moving to defuse the crisis with the German Constitutional Court. The ECB will release various unpublished documents on the assessment of the Public Sector Purchase Program (PSPP)’s proportionality to the Bundesbank, which the latter can then use to make its case to the German authorities. Alongside German Finance Minister Scholz’ assessment that a resolution was imminent, this reduces the risk that the Bundesbank has to withdraw from the PSPP and therefore eliminates one of the major risks in the Eurozone. On the other hand, trade tensions between the US and the EU heated up as the US released a list of $3.1bn worth of exports from France, Germany and Spain (plus the UK) that it is considering imposing new tariffs on.

We discussed the Gfk consumer sentiment index for Germany yesterday. Usually it’s pretty stable and not of much interest. But suddenly everyone is keen to know what consumers are thinking & feeling, and this one updates earlier than the European Commission’s more volatile one (last update was for May, whereas this update is supposedly for July). The market is looking for a decent rebound in sentiment, never mind that COVID-19 cases are (slightly) on the rise again in Germany. 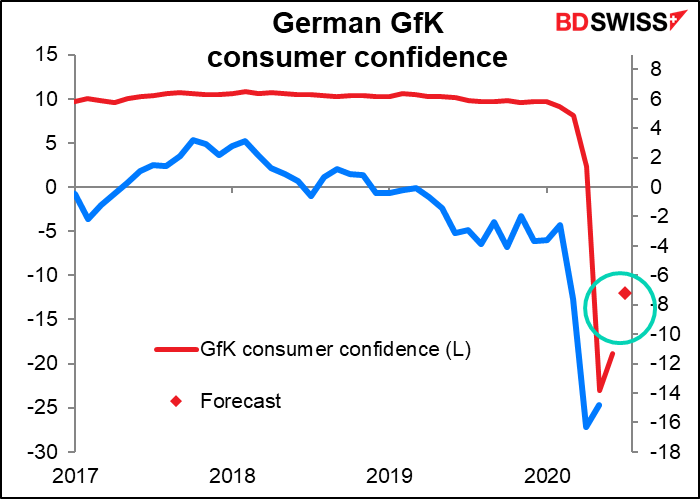 And that’s about it until the US starts up and a slew of US indicators come out all at the same time (12:30 GMT).
The most important of these is the weekly US jobless claims. Claims are expected to continue their gradual decline. 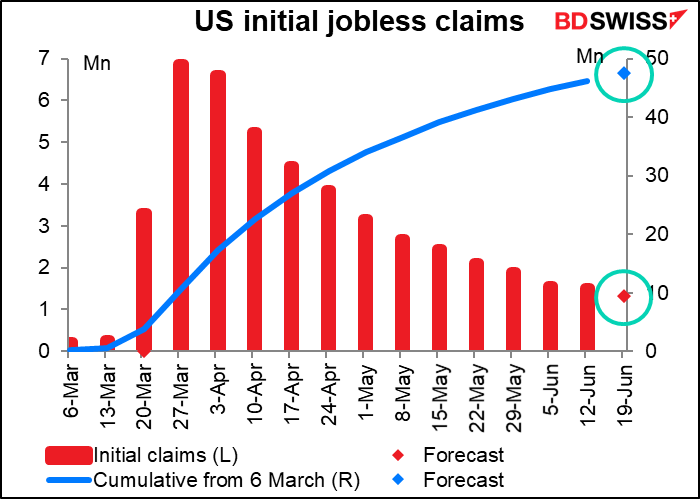 Jobless claims are expected to be 188k less than the previous week. That compares with an average for the last two weeks of -195k and -205k for the last three weeks. It looks like the market believes the curve is flattening here, which is not a good sign in this case – we’d prefer to see the number of claims falling at an accelerating pace every week. 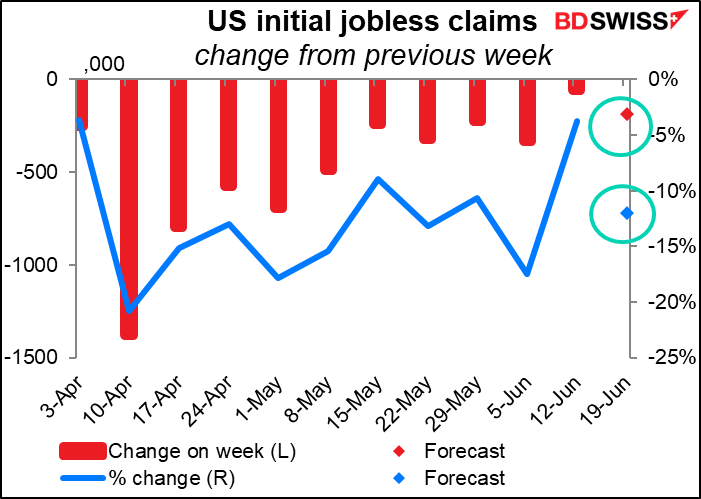 Continuing claims are expected to fall slightly (-544k). Any dip is good, because that shows that even though 1.5mn people are losing their jobs every week, even more people are getting jobs and moving off the unemployment rolls. But that shouldn’t hide the fact that this figure is 20mn people – in February it averaged 1.7mn people. 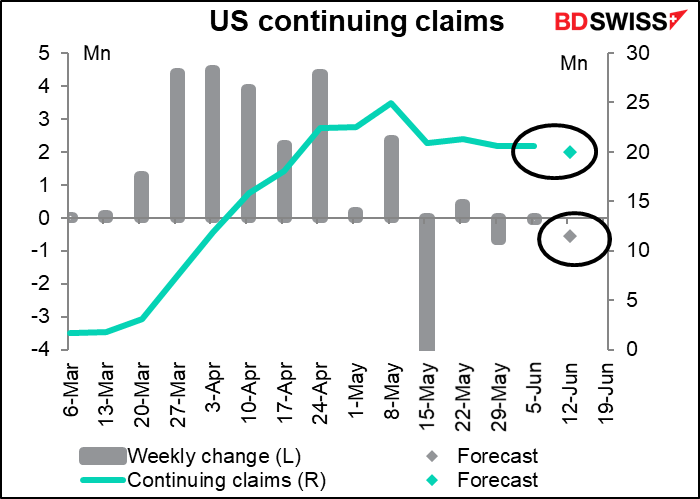 Durable goods orders are expected to bounce back a solid 10.5% mom. That’s great as it follows two months of steep declines, so it would confirm that April was the bottom and things started improving in May. But rather than looking at the percentage change, I think it’s more useful to look at the number itself. As you can see, even a 10.5% bounce would still leave orders 24% below where they were before the virus hit. 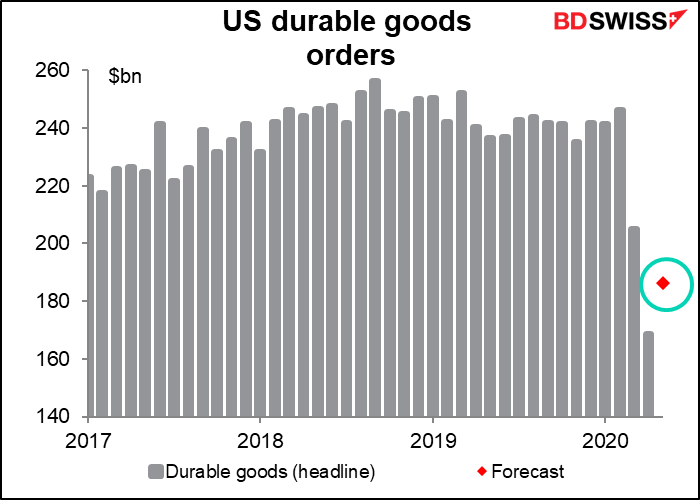 I learned FX back when trade figures were still important, so I still watch them. Nowadays they’re considered more an indicator of the strength of global growth rather than anything market-moving themselves. Attention is now focused squarely on the financial account, not the current account. So an anticipated widening of the US merchandise trade deficit probably won’t garner much attention. 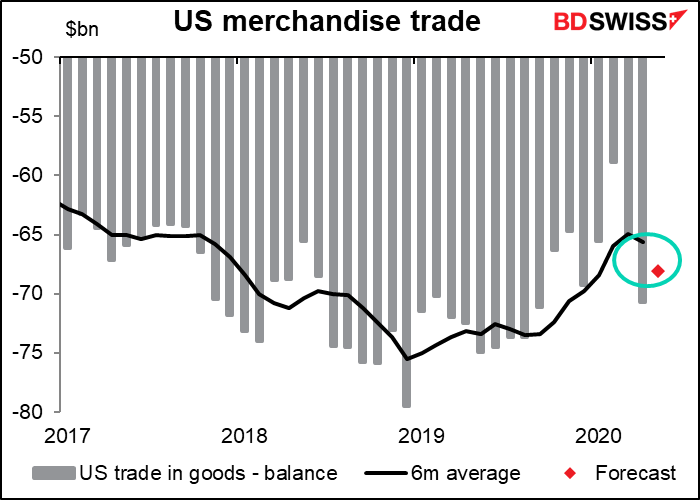 I don’t usually comment on speakers except when the Governor of a central bank speaks. However you might want to pay attention to what Bank of England Chief Economist Andy Haldane has to say today. He was the lone dissenter at last week’s Bank of England meeting and so he represents the chief obstacle to further easing.

Overnight we get the Tokyo consumer price index (CPI), which I have to mention each month but really has no impact, because inflation has been below target for around 25 years and they’ve pretty much given up even pretending to aim to get it back to 2%. Not much change is expected, anyway. 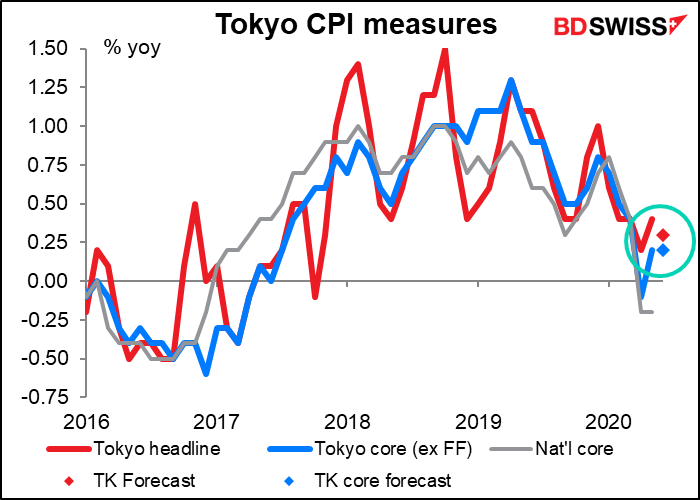 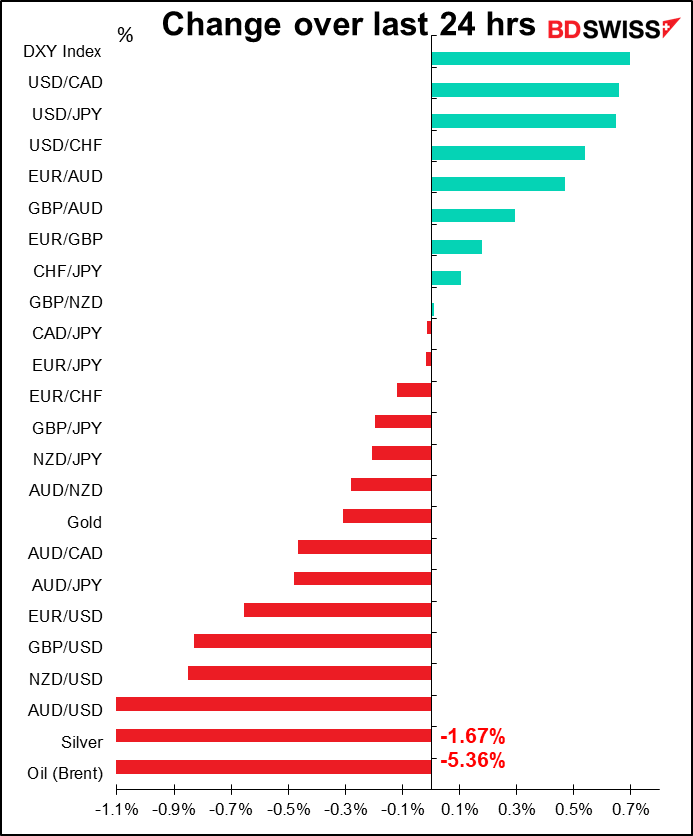