Back to “risk-on” and selling the dollar! The DXY index fell to the lowest level in over two years. The dollar’s weakness is now extending even to emerging market (EM) currencies, many of which gained vs USD yesterday. 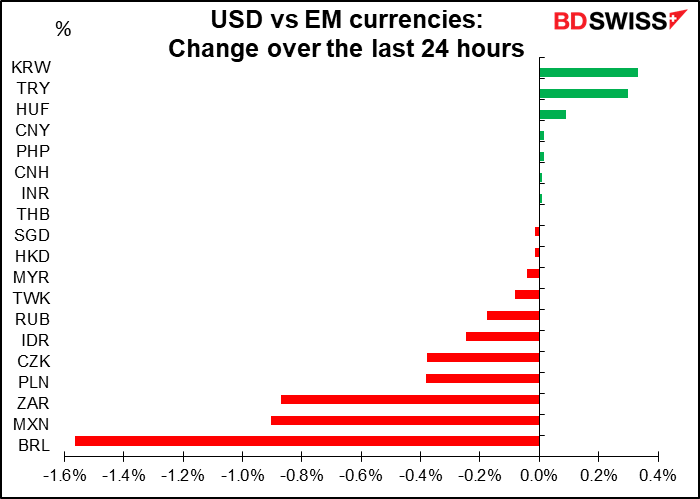 EM currencies fell sharply in the wake of the pandemic panic back in March as companies struggled to get dollars to pay interest on loans or meet other obligations. But that rush is over and now the dollar is starting to weaken all around. 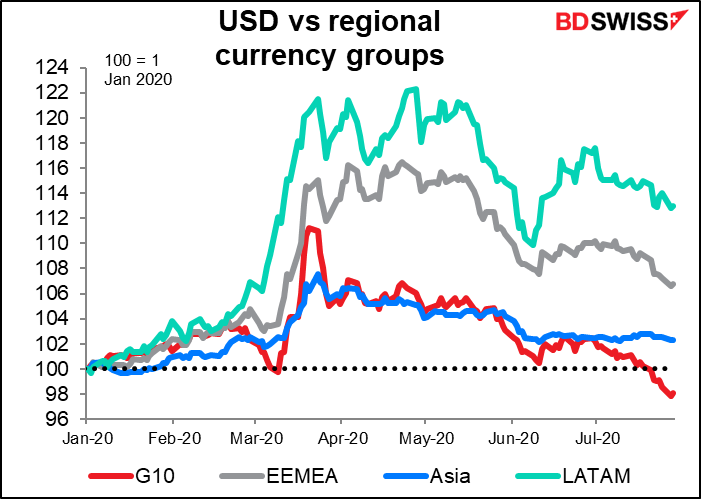 The counterpart to USD weakness is EUR strength. The common currency broke above 1.17 vs USD. As it has done recently, EUR/USD traded in a range during the European morning and only managed to break out of that range once the US day began. That indicates who’s buying.

EUR gained on all the crosses, particularly vs CHF. EUR/CHF was the biggest mover of all the pairs I follow. This was probably a catch-up rally to the move in EUR/USD as EUR/CHF was fairly stable last week despite the 2% rally in EUR/USD. The move in EUR/CHF (red line) and USD/CHF (green line) both started at about 08:00 GMT, the same time as the better-than-expected Ifo indices came out along with the Swiss National Bank’s sight deposit data. Note though that EUR/USD (blue line) did not move up at that time. It looks then like it was a distinct CHF move rather than a general EUR move.

It looks then like Europeans are buying euros vs their currencies, particularly vs CHF, while the US is buying EUR/USD.

Why the sudden move in CHF? Nothing specific I can find aside from catch-up. Yesterday’s sight deposit report suggested continued intervention in the market, but nothing unusual, in fact the least amount in over a month. 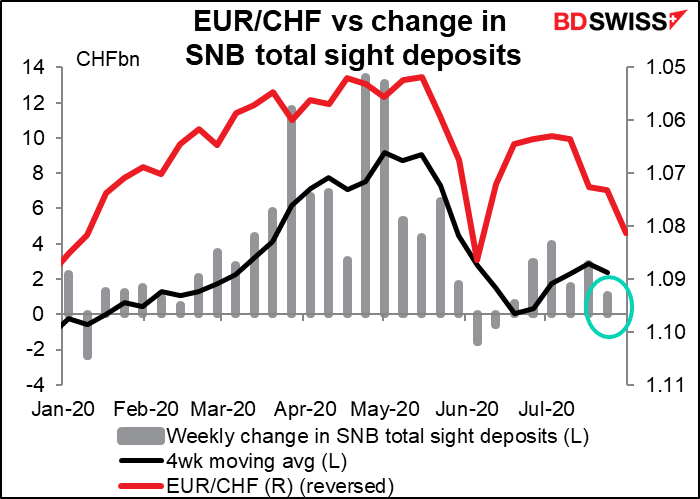 Positioniing in CHF isn’t extreme among either speculators or money managers, so there would be no urgent need to cut positions. 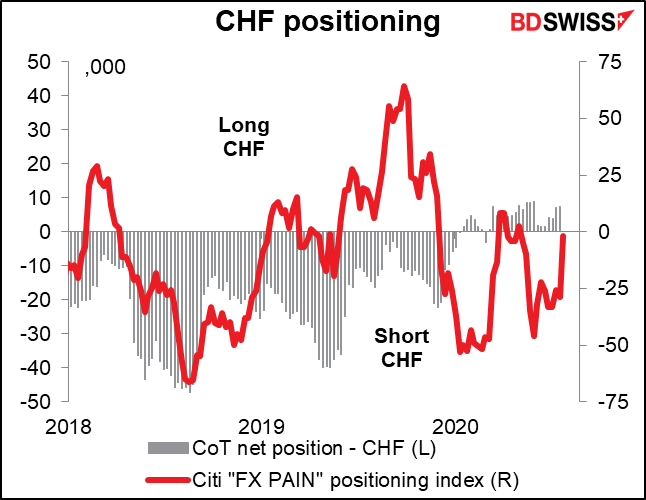 Perhaps traders just thought it was time to sell the most overvalued currency among the majors and buy the most undervalued. 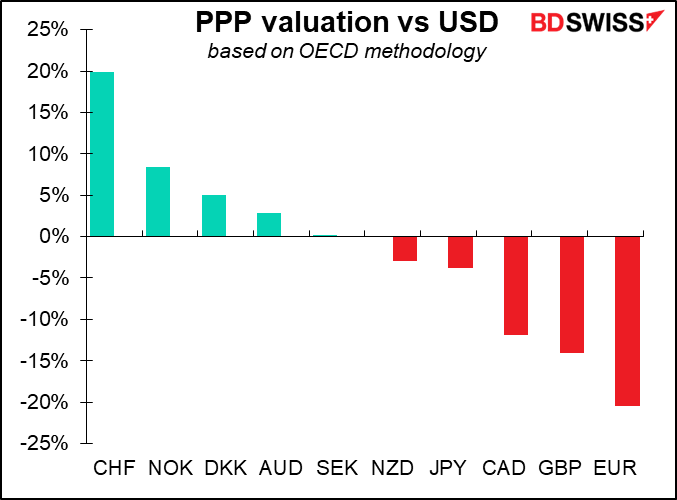 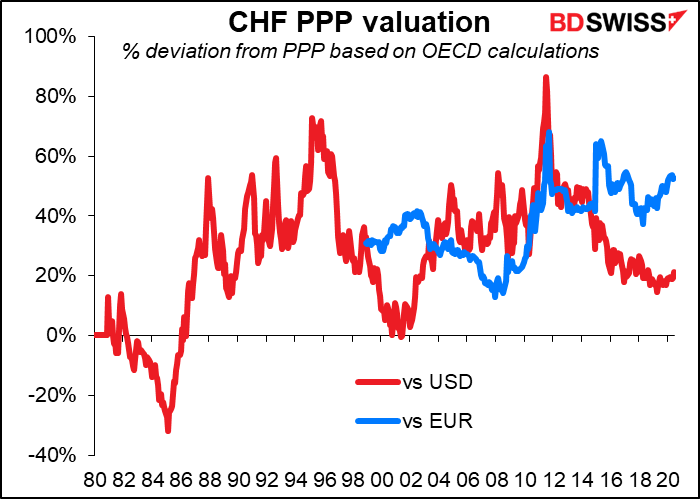 USD/JPY continued to move lower despite the weakness of the Japanese economy and the arrival of a “second wave” of the virus there (see below). JPY is another “international” currency rather than a “domestic” currency and its value is set more by global risk sentiment rather than economic conditions in Japan.

Meanwhile, silver and gold continued their extraordinary run, with the gold/silver ratio falling further to 79.0 from 83.5 on Friday. Gold futures briefly touched $2,000/oz overnight but it’s since come back down to trade around $1,944.

The Republicans finally came out with their bold plan for rescuing the US economy: they want to cut the extra federal unemployment benefits from $600 a week to $200 in their $1tn economic recovery package.

The Democrats on the other hand are seeking to maintain the $600 payments through the rest of the year, plus repeating the $1,200-per-person stimulus payments, in their $3tn package. (I only got $11.55, so I wasn’t very stimulated, but I’m not complaining.)

The Republican proposal envisions eventually shifting to a new system of calculating benefits that would cap payments at about 70% of a worker’s prior income, which would also amount to around $200 a week. The reason they are so concerned about this? They fear that some people are getting more than what they earned while working (which is true) and so it creates a disincentive to return to work.

Let me explain how ridiculous this reasoning is. According to the June employment survey, there are 17.75mn unemployed persons in the US. (The Bureau of Labor Statistics admits that the actual figure is probably higher, but we’ll use this.) According to the May Job Offers and Labor Turnover Survey (JOLTS), there were 5.4mn job openings in the country. It is a physical impossibility for all the unemployed to go back to work. There aren’t enough jobs even for one-third of them. 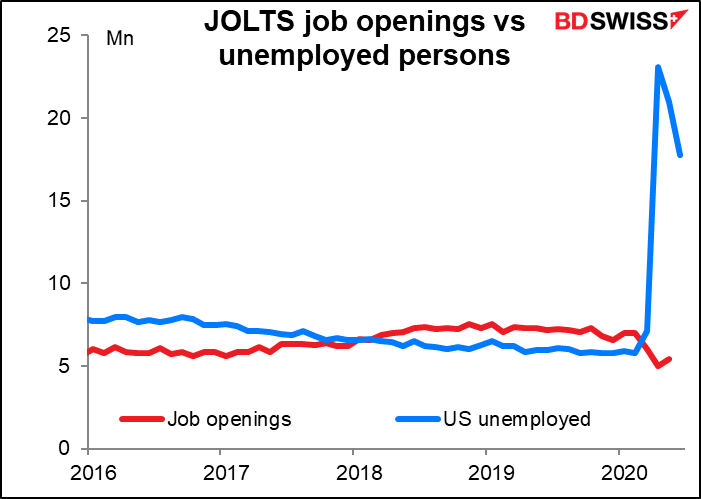 Furthermore, while I’m sure some people would take the free money while they can, most people are not so stupid. They realize it will eventually run out and a proper job provides more income over the longer term. They make their decision based on the value of all their future earnings.

But of course like so much Republican policy, the aim is not really to provide proper incentives or insure good usage of taxpayer’s money. It’s simply to punish people for being poor. That’s it. How else do we explain this move at the same time as they are increasing the deductions for business meals and entertainment? And trying to take people’s health insurance away during a pandemic?

Yesterday, the Bundesbank updated its weekly indicator of German economic activity. It continues to climb, while the US equivalent put out by the NY Fed is starting to turn down. It’s this growth divergence that’s driving EUR/USD higher – no doubt caused by virus divergence. 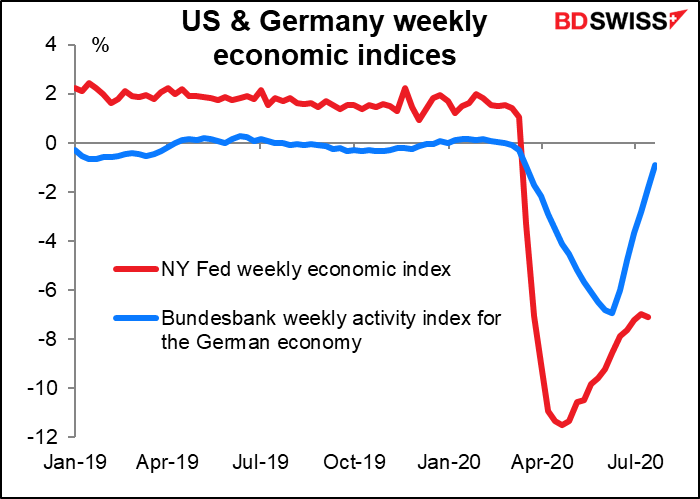 Virus update: some countries are showing the dreaded “Second Wave”

It’s especially discouraging as these countries had gotten down to the point where there were almost no new cases, making it look as if the problem was nearly solved. But now it’s worse than ever. 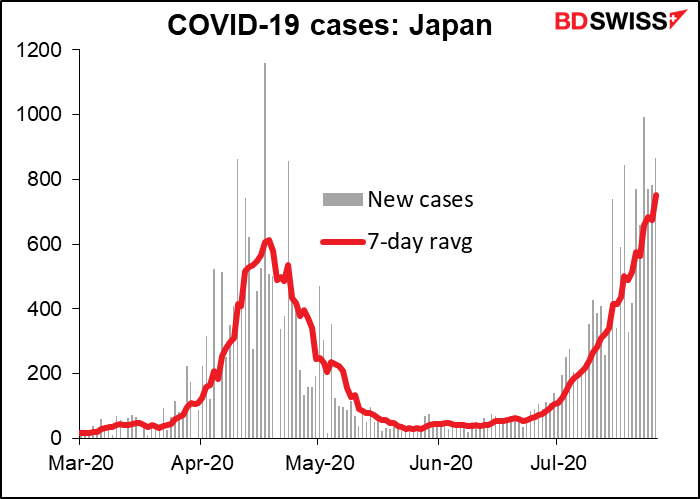 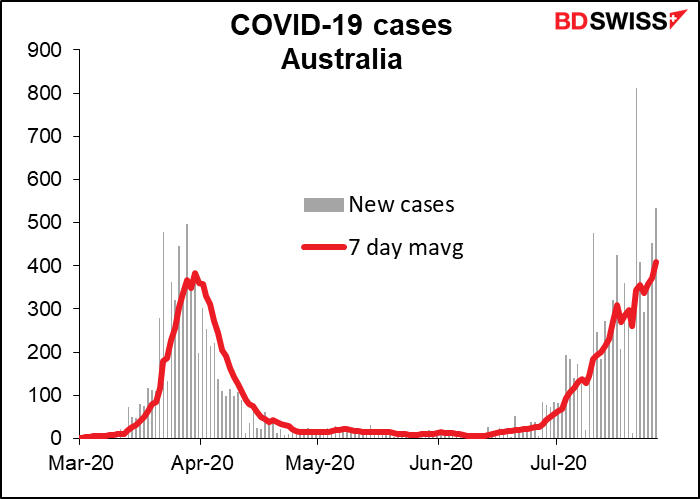 Not that much on the schedule today.

The Conference Board consumer confidence index is expected to follow the U of M index down. No surprise that confidence is waning when 32mn people are receiving unemployment benefits (vs 1.7mn in the same week a year earlier). 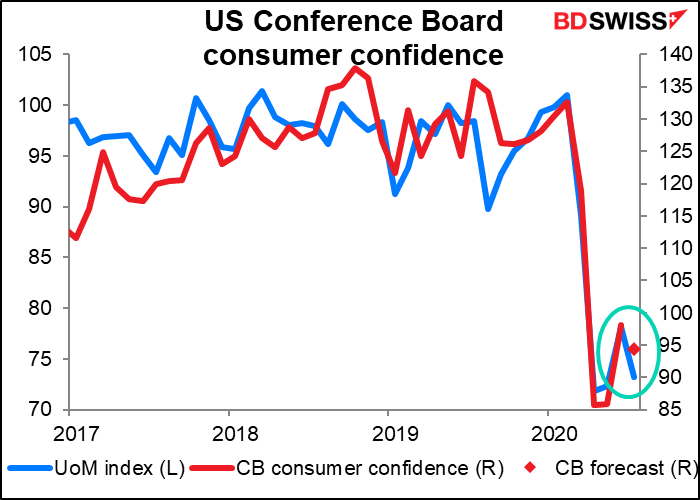 The Richmond Fed manufacturing index is forecast to go from zero to +5. That would actually be a bit low in comparison with the recovery that we’ve seen in the Philly Fed and Empire State indices. 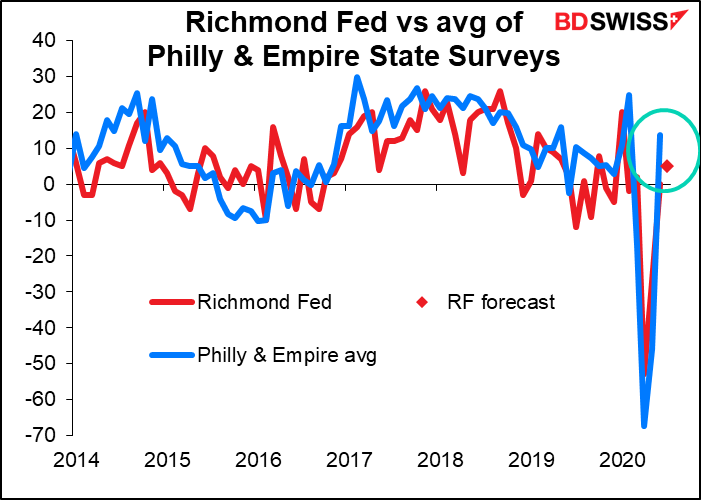 But then again, the virus situation is very different in the Richmond district – which the two Carolinas, Maryland, Virginia, most of West Virginia and Washington, DC — vs the Philadelphia and New York Fed districts (New York, New Jersey, Delaware and the eastern part of Pennsylvania), which confronted the virus early on and managed to get it under control eventually. (Note that Virginia and North Carolina are both under Democratic governors, so we can’t just portray this as a “Democratic states vs Republican states” issue.) 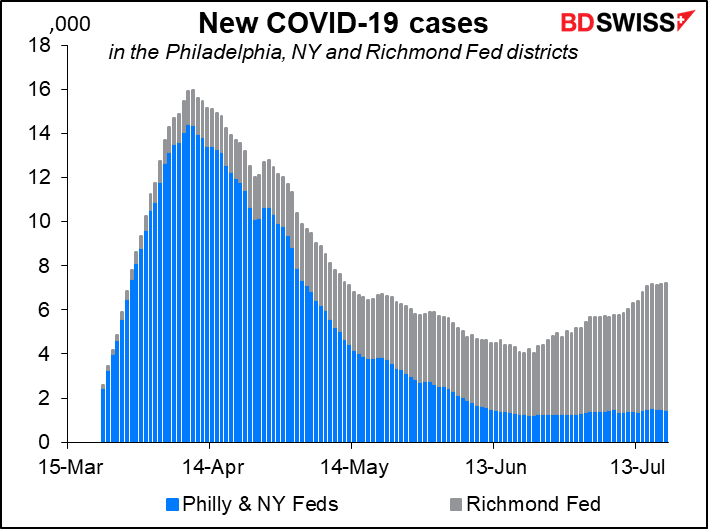 I put a lot of emphasis on the Richmond Fed index because out of the five regional Fed indices, it’s the most closely correlated with the Institute of Supply Management (ISM) manufacturing purchasing managers’ index (PMI). And that after all is why people are looking at these indices to begin with.

That’s it until overnight, when Australia announces its consumer price index. I’m quite interested in Australian inflation nowadays, because using the latest figures, the country has the highest headline inflation in the G10 and therefore also the lowest real yields (since interest rates are pretty much the same everywhere). 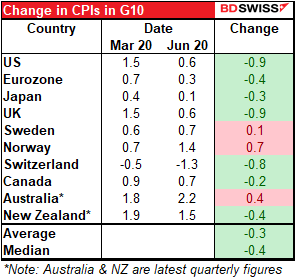 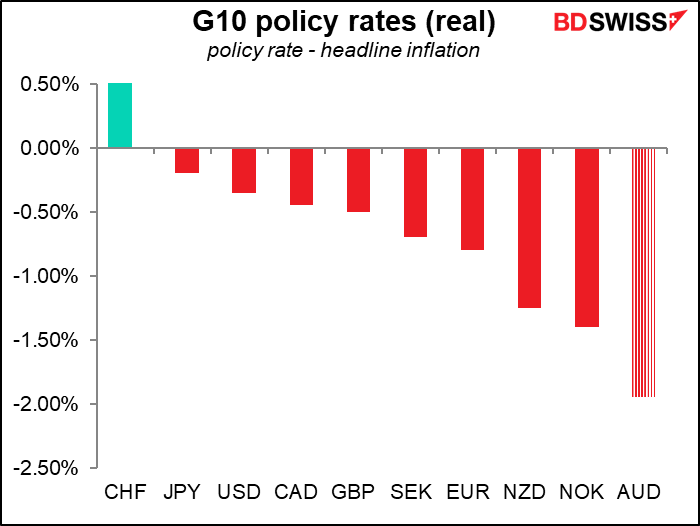 But that’s set to change this week when the market predicts prices will have fallen a record 2% qoq, pushing the headline rate into negative territory. In other words, the country is expected to go in three months from having the second-highest inflation in the G10 to the second-lowest, indeed deflation. This is a great example of the way that the COVID-19 virus is hitting inflation around the world. Most of the expected decline is due to the evaporation of demand for services, such as childcare and education, plus falling gasoline prices. The fall will not surprise anyone. The Reserve Bank of Australia said back in May that inflation “is expected to turn negative temporarily in the June quarter, due to falls in oil prices, the introduction of free child care and deferrals of various price increases.” The main question is, how long will it last? 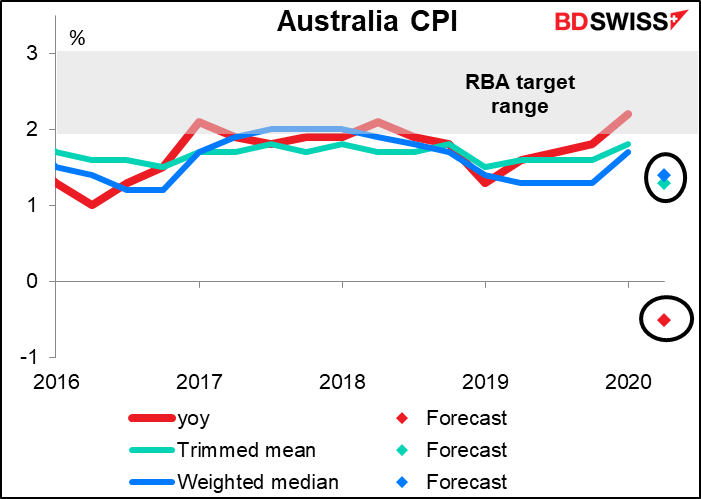 I mentioned yesterday how AUD is being used as a funding currency for carry trades thanks to its low interest rates and its high correlation with emerging market currencies. A rise in the currency’s real yield could make investors move out of that trade. If so, the fall in inflation could paradoxically be supportive of AUD. But I’d have to see how it develops – I don’t think that would be the immediate reaction. 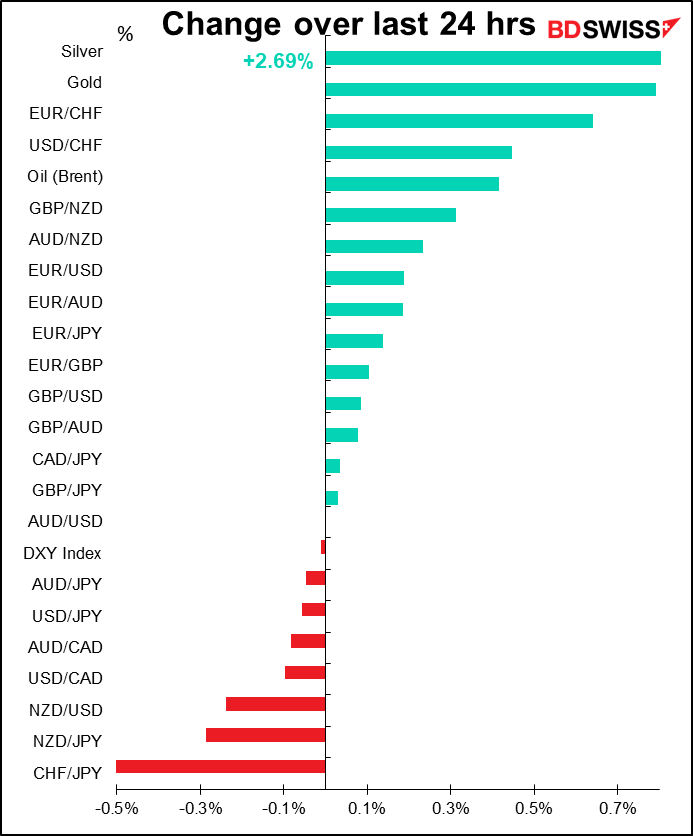