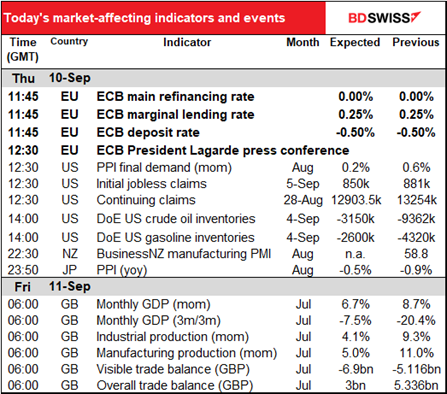 I should’ve remembered the motto of the investment industry:  “past performance is no guarantee of future performance.” The kind of speculative blow-offs that signaled market tops before, with a rush to buy followed by a rush to sell, may not have the same significance nowadays with a new generation of traders and of course central banks. The new rule of the market seems to be “buy when prices are going down, and buy when prices are going up.” Apparently we analysts can be replaced by a GIF that just says “buy.”.

Risk sentiment was aided by news that the AstraZeneca vaccine trials may resume next week. The patient who fell ill had a side effect that’s common to vaccines and so the company hopes to resume trials next week.

As risk sentiment returned, the safe-haven USD and JPY underperformed. CHF on the other hand rose across the board, probably as a reaction to EUR movements (which we’ll get to in a moment).

While the safe-havens fell, the commodity currencies naturally gained. Unfortunately NZD gained more than AUD, which severely dents my recent theory that NZD has a higher beta to the stock market on the downside while AUD has a higher beta on the upside. Maybe NZD has just become the higher beta of the two.

The other big news of the day was a Bloomberg story about today’s European Central Bank (ECB) meeting. The story, “ECB Forecasts Said to Show More Confidence in Economic Outlook,”  made people revise their expectations about what was likely to happen at today’s ECB meeting (see below). The story read, “Some European Central Bank policymakers have become more confident in their forecasts for the region’s economic recovery, potentially reducing the need for more monetary stimulus this year, according to euro-area officials familiar with the discussions. The latest projections for output and inflation will show only slight changes to the June outlook, the people said…” EUR gained on the news, with hedge funds especially big buyers.

If the story is correct and there are few adjustments to the forecasts, then the market focus is likely to be on any comments about the currency. I explained in my weekly comment why I think the issue of the currency’s impact on inflation is a red herring – if indeed they are concerned about the level of the euro, it’s because they want to encourage export-led growth, not because they’re worried about it dampening inflation. But they can’t say that in public because it goes against G7 policy to avoid “beggar-thy-neighbor” devaluations. Assuming the Bloomberg story is correct, I believe the market is discounting more from the ECB than it’s likely to get and I see EUR/USD bouncing back after the meeting (see below).

GBP fell further as the UK released its Internal Markets Bill, which indeed did contain the provisions that the UK government could break international law if necessary to protect the unity of the UK. The EU response was muted – they didn’t suspend talks, but rather the European Commission called for an emergency meeting of the Brexit Joint Committee so that the UK could explain itself to the EU. The bill also met with some opposition from members of the ruling Conservative Party. I think they may have to backtrack on this crazy idea somewhat, which gives GBP room to recover more.

Elsewhere they said that “the bounce-back in activity in the third quarter looks to be faster than anticipated in July” and listed a large number of favorable developments, such as household spending, employment, and exports. They also said the US recovery “has been stronger than expected.” The statement was modestly CAD-positive and should keep CAD on a strengthening trend, depending of course on the general risk environment and oil prices.

The moment you’ve all been waiting for – the European Central Bank (ECB) meeting!  As with the Bank of Canada meeting yesterday, I dealt with this in depth and detail in my weekly comment, so no need to discuss the why in great detail – you can (re) read it there if you’re interested. The conclusion I came to is that they are likely to take some action in the face of a slowing economy, falling inflation and a lower forecast for the inflation outlook. (Some people would add “and an appreciating currency” but I disagree.) However, expectations have changed suddenly thanks to yesterday’s Bloomberg story. I have to admit I don’t have any friends on the ECB Governing Council so I have no secret insight into what they will say.

If they do choose to do anything, what more can they do? With their deposit rate at -0.5% and their lending rate at zero, with an entire alphabet soup of lending programs, what can they come up with next?

They could choose just to talk or they could decide to act. If the former, they would simply add a lot of caveats about the uncertainty and the downside risks to the forecasts etc etc while talking about the need for further clarity about the path of the virus and the economic outlook. That would be a set-up for a move in December.

If they do decide to act, they have several alternatives. They could lower the deposit rate further. Governing Council Member Isabel Schnabel’s recent speech on negative rates made it clear that they think negative rates are an effective policy tool, although she did warn about the possible effects on the banking system if rates remain negative for too long, especially in the wake of the pandemic. They could firm up their forward guidance, adding more specific criteria or extending the duration. Or they could increase their quantitative easing through the Asset Purchase Programme (APP) They’re not out of tricks yet.

Impact on the market:  EUR/USD briefly poked its nose over 1.20 on 1 September, but then came down to a low of 1.730 yesterday. It popped back up after the Bloomberg story ran and is now back over 1.18 (1.1828 at the time of writing). This suggests to me that views have been somewhat revised but not completely by any means. The market apparently still expects something from them; if not a more dovish tilt, then specific comments about the level of the euro.

Those expectations set the market up for a “sell the rumor, buy the fact” response if the ECB fails to deliver either the dovish policy stance or the worried view on the currency that people expect. I look for a rebound in EUR/USD after the meeting as I don’t think they will surpass what’s already discounted in the market.

How to trade the ECB? If you’re looking to trade the ECB meeting, I’d suggest you consider doing so through EUR/JPY as well as EUR/USD. EUR/JPY didn’t have the big surge that EUR/USD did in March, but it has had more reliable surges in other months. There isn’t that much difference, though. EUR/GBP is definitely a lower-volatility choice. (Note that the red bars only represent days when the ECB changed one of its rates and doesn’t include days when it changed one of its bond purchase programs). 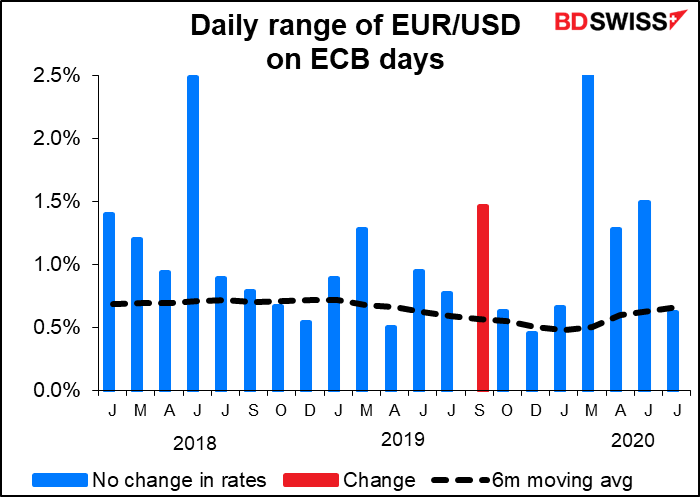 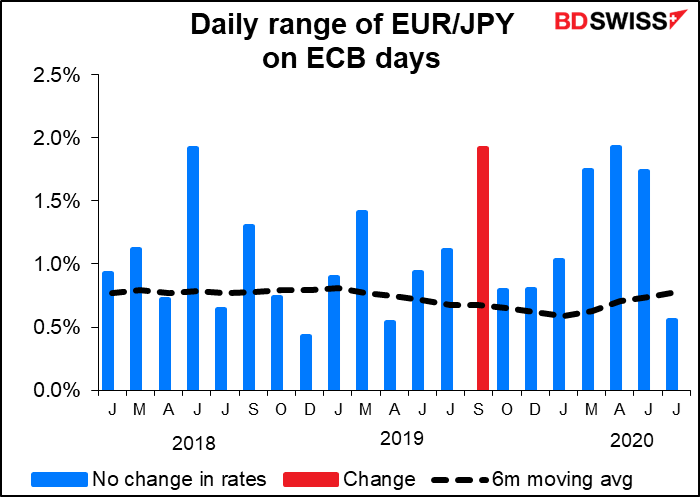 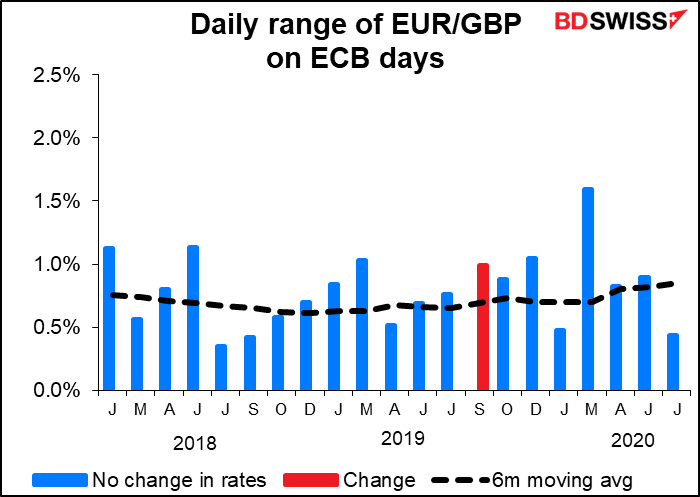 US jobless claims are expected to continue their slow trend downwards, but oh so slowly. Initial claims are expected to be 31k below the previous week’s level, while continuing claims are forecast to be down 350k. Comparing the week-on-week change this week with last week’s change isn’t fair, because last week was the first time that the new seasonal adjustment technique was used. Still, claims can hardly be said to be collapsing. 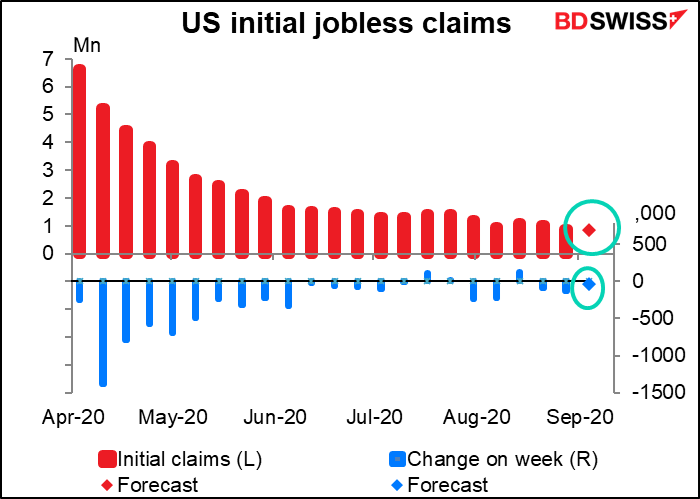 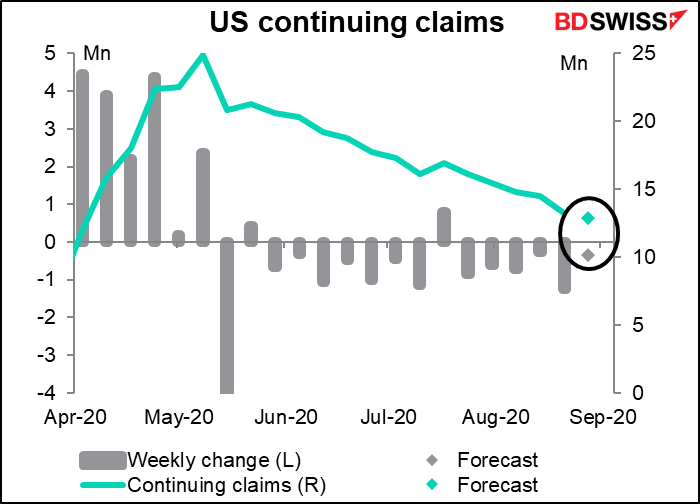 Furthermore, the claims data that we see are not the whole story when it comes to unemployment in the US. For the week of 14 Aug, the latest date that we have full data for, continuing claims fell 267k to 14.5mn, but total US unemployment insurance claims of all programs jumped by 2.2mn. 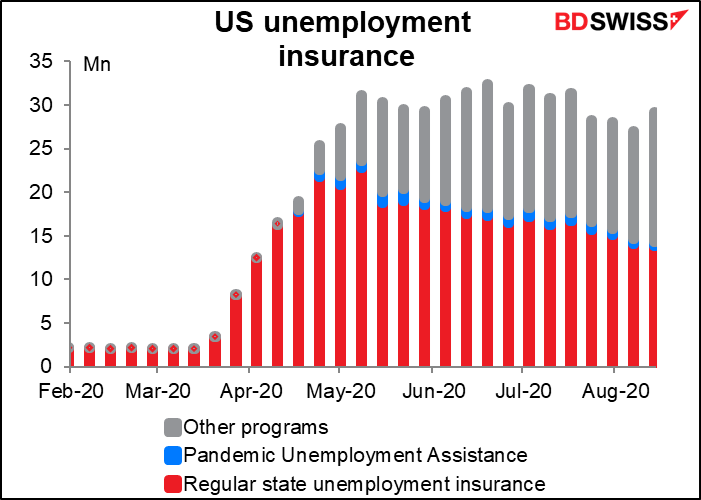 US oil inventories are expected to decline by around 3.1mn barrels in the latest week. That’s about what the American Petroleum Institute (API) said last night (-3.0mn) 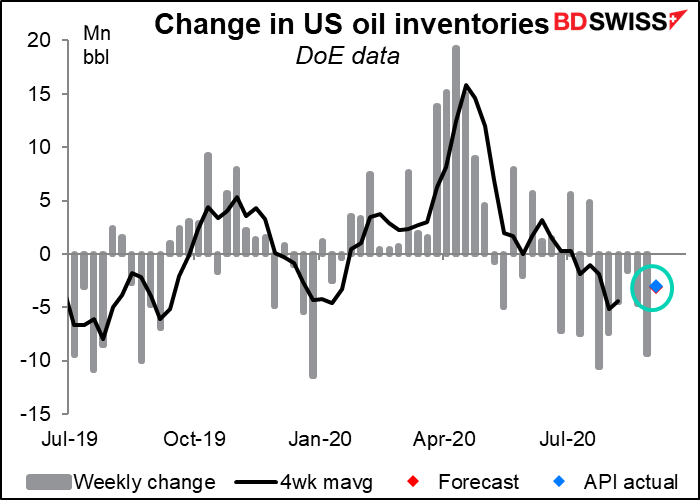 The API estimated gasoline inventories to be down 6.9mn bbl, far more than the 2.6mn bbl that the market was expecting. That didn’t seem to encourage the market very much last night, though. 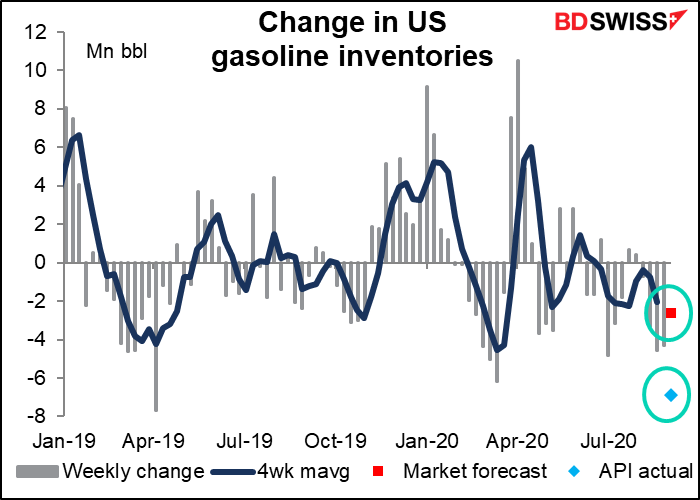 I list the Japan producer prices because it’s closely watched, but I doubt if the people watching it are FX traders, more likely equity people, so no graph or comment.

So we go to bed and wake up early to attend to UK short-term indicator day. The most important of the indicators out, in my view, is the monthly GDP. It’s expected to be up by a decent amount, and there’s reason to be positive. The UK suffered the worst Q2 decline in Europe (-20.4% qoq), therefore the Q3 recovery – of which July is the first month – should be similarly dramatic, although not likely to recover all the ground lost in Q2. (The market is looking for +14.0% qoq in Q3.) As firms resume operations, furloughed employees return to work, and social restrictions ease, activity should improve. Signs of a continued recovery could be positive for sterling. 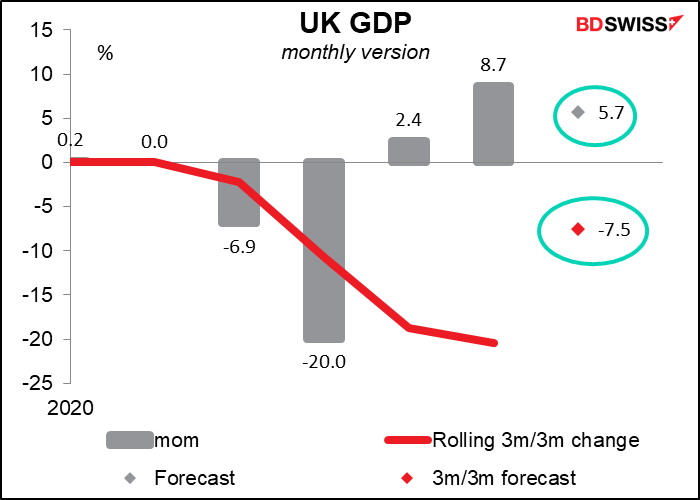 Industrial & manufacturing production are expected to continue their recovery but still be below pre-pandemic levels – 7.8% below for IP, 9.5% below for manufacturing. This is slow but at least it’s in the right direction. 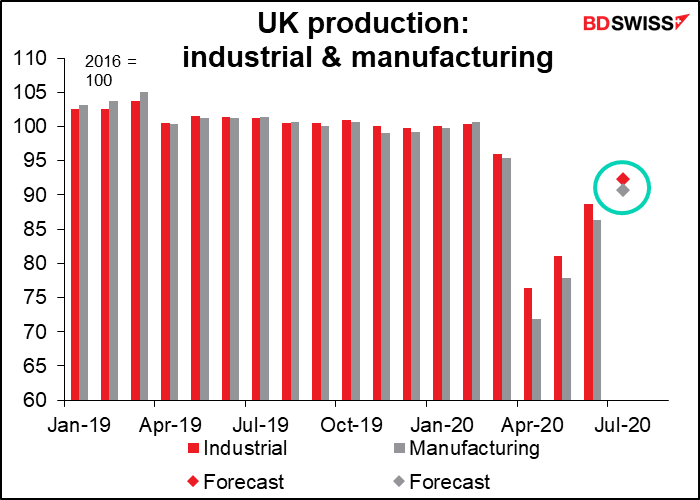 The trade deficit in goods is expected to widen further, but the overall surplus is forecast to remain the same. That’s because exports didn’t fall as much as imports did. 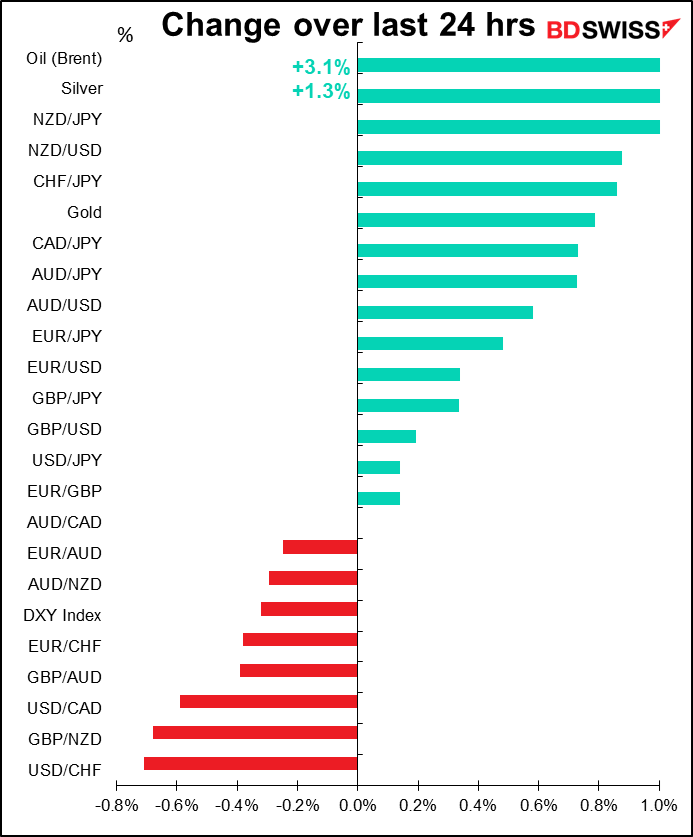