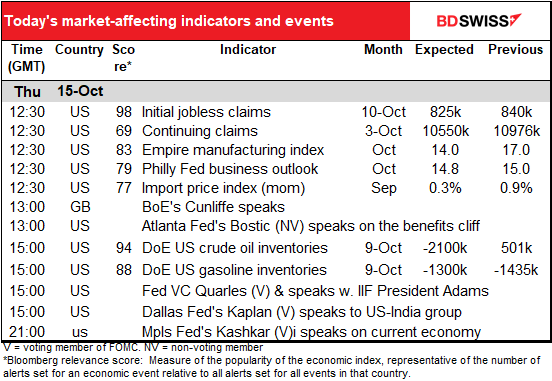 FYI this little note from someone on Twitter:  3 weeks ago Trump held a rally 4 miles from our village. Our county was previously virtually COVID free. Now we have a massive spike. Including a nursing home (an assistant went to the rally) and the local school. Irre-(censored)-sponsible.

This ties in with a story that appeared in today’s New York Times:  As Virus Hits Rural U.S., Numbers May Be Small, but the Impact Is Not   It argued that the impact of the virus is starting to be disproportionately large in sparsely populated rural areas. The largely rural states of North Dakota, South Dakota and Montana, for example, have announced the country’s highest number of cases on a per capita basis. North Dakota has had 78 cases in the last week, vs 764 for Florida (the highest in the country), but North Dakota has a population of only 762,000, vs some 21.5mn for Florida.

These rural states tend to vote Republican. I don’t know what impact if any this might have on the election.

It’s evident from the graph above that there are only two currencies that need to be discussed in any depth today.

As for GBP, headlines saying that the “UK willing to extend Brexit talks beyond PM’s suggested deadline” (which is today) encouraged investors. Discussions are likely to continue next week. The comments weren’t new as UK trade negotiator Frost has said the same thing the day before, but it gave the market confidence nonetheless.

Fisheries continue to be a main sticking point but The Guardian newspaper reported that France submitted a potential compromise on fisheries, which is the main remaining sticking point. It seems to involve the French being allowed to fish as they always have in the Channel while Scottish fishermen get increased access to the waters around Scotland. France has been the main obstacle to a compromise here so if they’re suggesting a deal, it could mean progress. Having missed the 15 October deadline, the next target is likely to be the next EU summit on 15 November. We can’t become com-plaice-ent however as negotiations cod still flounder!

The price action was consistent throughout the day and didn’t necessarily track other currencies, which indicated that 1.2850 triggered a GBP/USD buy level for some momentum or models traders. If GBP/USD breaks above 1.3083 then from a technical perspective, it should suggest the pair is not in a near-term correction.

At the other end of the spectrum, AUD fell after Reserve Bank of Australia (RBA) Gov. Lowe said the board is assessing whether buying longer-dated bonds would help the employment situation. The RBA currently intervenes to keep the 3-year yield, which is the benchmark in Australia for most financial contracts, at 0.25%, but it doesn’t control yields further out the curve. 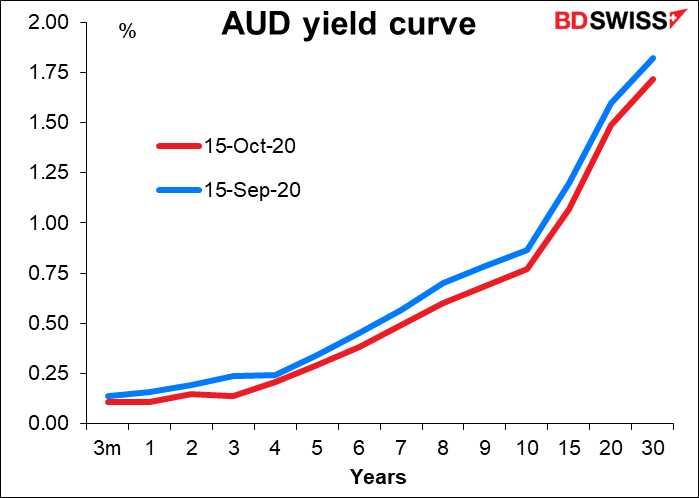 AUD 10-year bonds yields are higher than those of most other major currencies both on an unhedged basis and after hedging the currency. 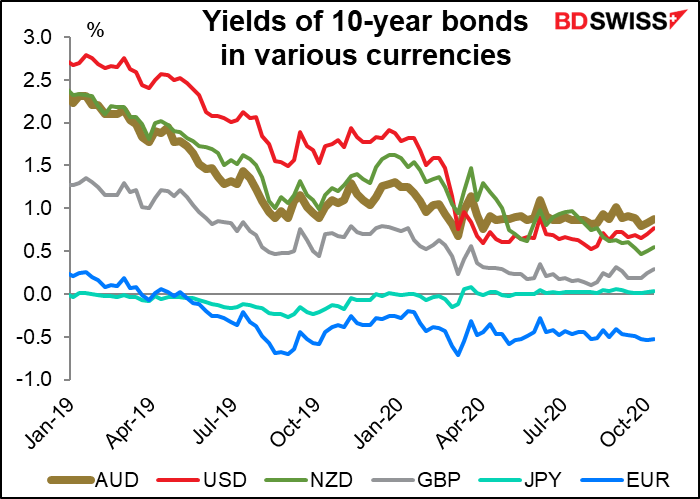 The RBA has been quite vocal in discussing ways in which it could ease policy further. I would expect AUD to weaken relative to the other commodity currencies, particularly CAD. The Bank of Canada has already blown its balance sheet up like a fugu fish while rejecting the idea of negative interest rates. I think there’s much more room for further loosening in Australia than in Canada.

Elsewhere, USD was slightly lower as US Treasury Secretary Mnuchin said it would be “difficult” to pass a stimulus bill before the election. In this case, “difficult” really means “impossible.” He said the main sticking point wasn’t the size of the package, but rather that the policies within each side’s bill are not easily reconcilable. He didn’t even mention that even if they could reach an agreement, the Republican Senate wouldn’t pass a bill of the size that the White House and House Democrats have proposed. I guess there must have been some investors – either incredibly optimistic or just basically delusionary – who expected them to reach an agreement, because Mnuchin’s comments triggered a “risk-off” move in the markets.

My question is, why isn’t the dollar higher today? Because recently the dollar has been moving inversely to stocks, rallying on “risk-off” moves. Perhaps people are starting to focus more on the implications for the domestic economy and Fed policy – the “domestic dollar.”  That’s especially so as US economic indicators aren’t surprising on the upside as much as they used to… …amidst signs that the US economy is slowing. And of course everyone (who’s not a Republican senator) knows what will happen to the US as people run out of unemployment benefits. That’s likely to be negative for the dollar. 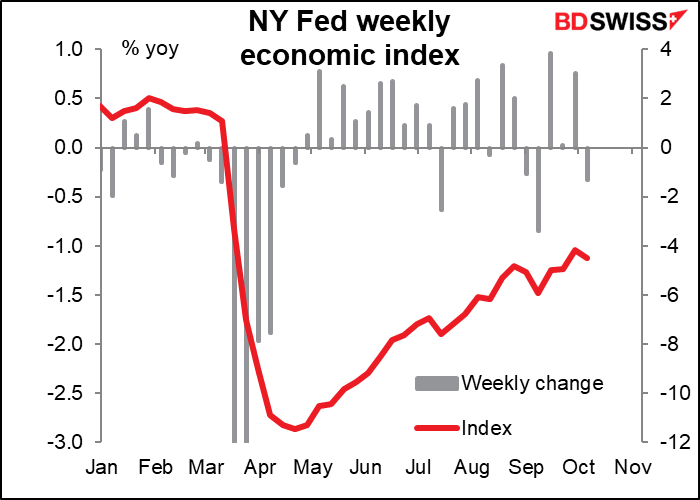 The other thing is though, this is hardly a hard-and-fast rule. As the graph shows, the dollar doesn’t always follow the stock market. Since the beginning of 2019 they’ve moved inversely 55.6% of days, which is a little better than random but not much. 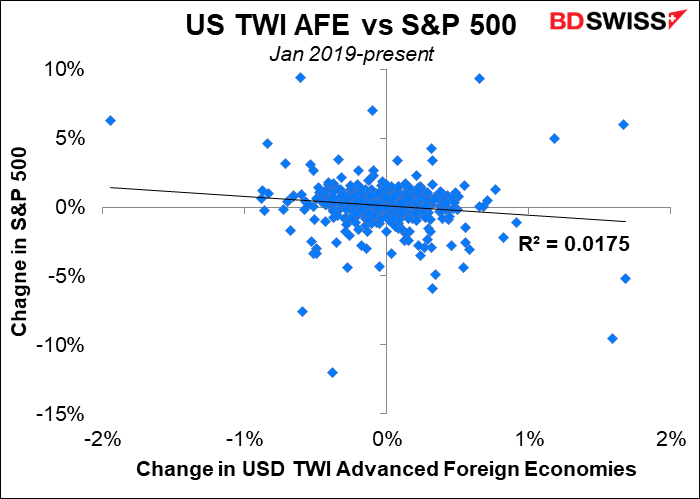 The main event today will of course be the first day of the two-day European Council summit meeting. This was supposed to be the “Brexit summit,” as UK PM Johnson said the meeting was a deadline for a breakthrough in negotiations, but it looks like that’s going to be put off to the next one (15 November). Still, we can hope for some good news to come out of this – or will they just kick the can (of tuna) down the road again, as usual in the EU?  The pandemic is likely to be another major topic of discussion as France orders a curfew for Paris and eight other cities and Germany toughens restrictions as Chancellor Merkel warns the country is facing “exponential growth” in infections. Italy has also reported a record number of cases.

When the US starts up, we get an unusual confluence of indicators that don’t usually come out on the same day.

Let’s start with the appalling jobless claims. Both initial and continuing claims are expected to fall from the previous week, but the fall in the former is pitiful and the fall in the latter is disingenuous – some people may be falling off the unemployment rolls because they’ve exhausted their benefits, not because they’ve found a job. 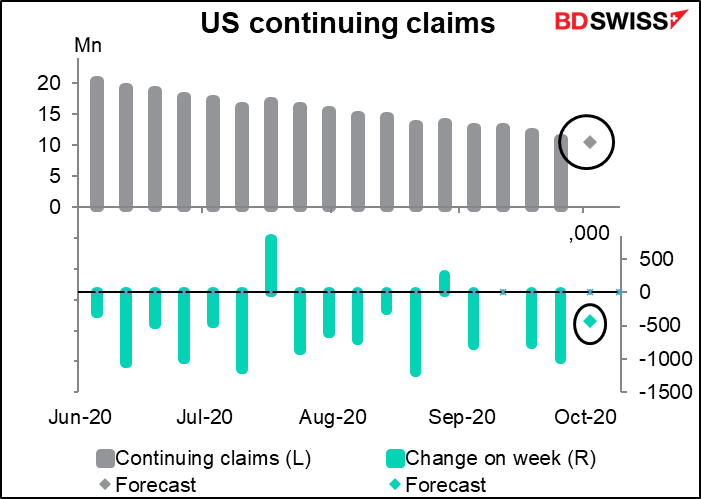 Over the past six weeks, initial claims have averaged 867,000. That’s more than the 661k increase in the nonfarm payrolls that we saw for the month. How then can the unemployment rate be falling? Probably because a lot of people have exhausted their unemployment benefits and given up looking for work and so are no longer counted as unemployed. If we count all these people back in, we get what’s called the “U-6” unemployment measure, which is about 5 percentage points higher than the official unemployment rate. 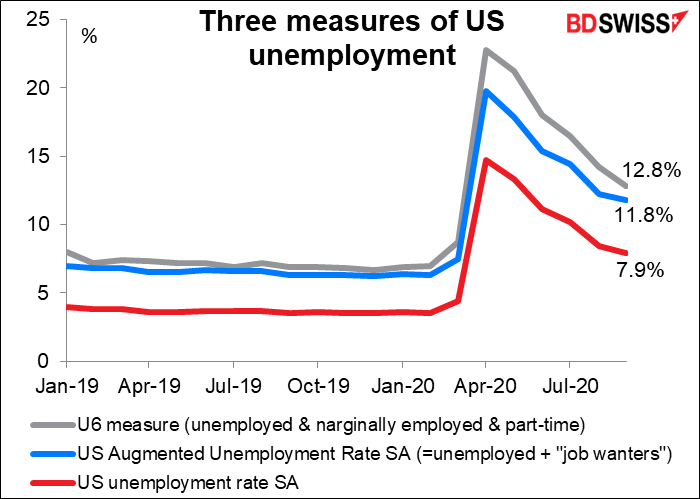 And to make matters worse, California – the most populous state in the union – has been having problems in processing claims. They’re expected to be back on line this week, so we could see big revisions to the numbers either way. (California accounts for 12% of the total US population.)

In any event, the jobless claims figures suggest that the improvement in the employment picture is stalling.

At the same time as the jobless claims are announced, we get both the Empire State manufacturing index and the Philadelphia Fed business sentiment index. These normally come out on different days. They’re both expected to stay in expansionary territory but just decline a bit, consistent with the generally accepted story of a moderating (slowing?) pace of growth. (You’ll have a hard time seeing the two dots as the forecasts for both are more or less the same.) US import prices come out at the same time, too. Probably they’ll be ignored, what with everything else that’s coming out now. Inflation isn’t the problem du jour nowadays. 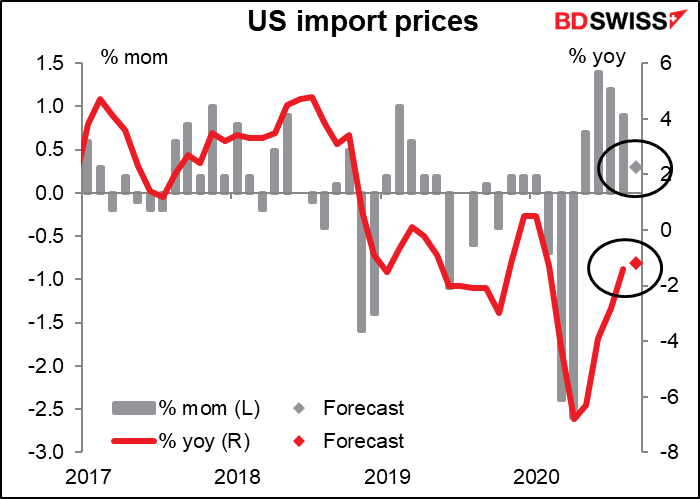 Yesterday’s data from the American Petroleum Institute (API) showed a decline in oil inventories more than double what the market had been expecting. If the Dept of Energy confirms that figure today, oil prices could rally further. 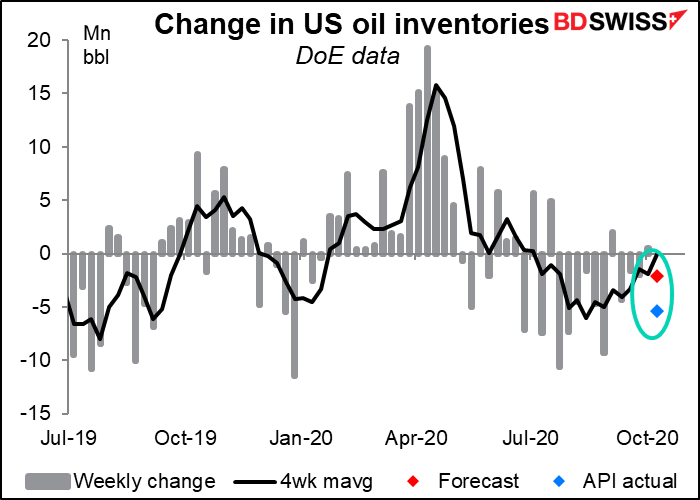 The API’s gasoline inventory figure was in line with market estimates. 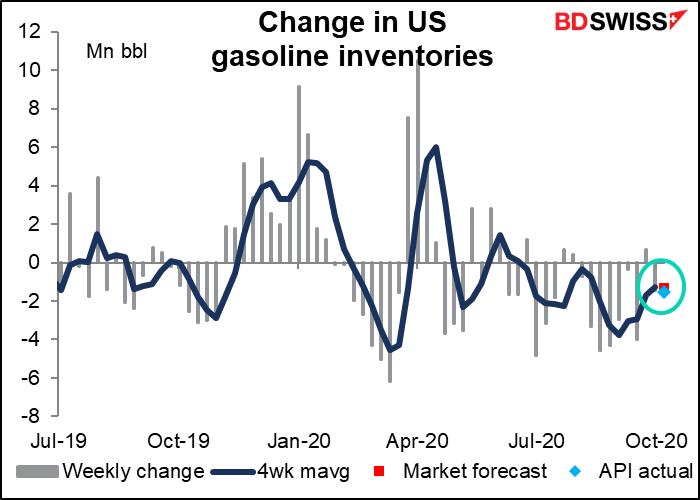 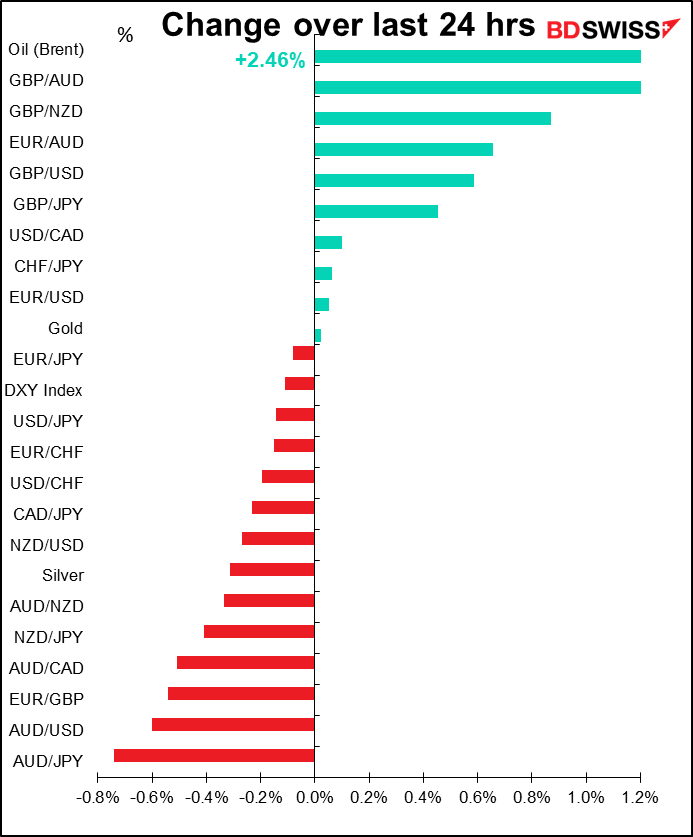