GBP up on Brexit news, CAD down on lower oil; US jobless claims, Presidential debate 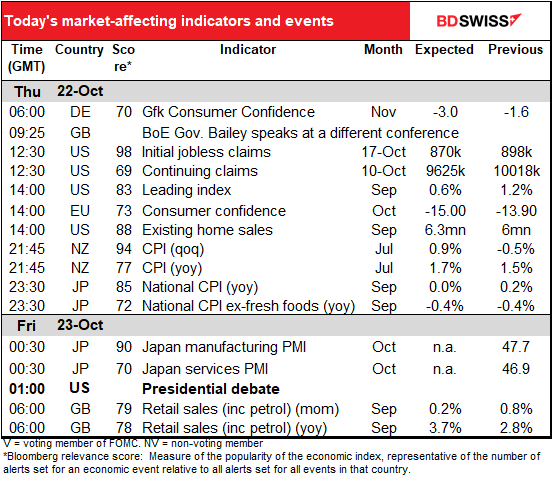 Oops! My mistake – the US presidential debate is tonight, not yesterday. My apologies. I could explain why it’s all Bloomberg’s fault, but I should have known better myself.

Furthermore, I also got the number of Trump’s interruptions at the last debate wrong – it was 128 interruptions of both Biden and the moderator, or once every 42 seconds (approximately).

There are few undecided people left in America, and with an unprecedented number of people having voted already, the debate is not likely to change the vote that much. Nonetheless it could have some impact at the margin in states where the vote is finely balanced, and with the US Electoral College’s “winner-take-all” system, that can be important.

FYI a reporter corroborated my belief that reality doesn’t matter anymore in America. In his latest column, Farhad Manjoo said, “I have become consumed with an alarming possibility: that neither the polls nor the actual outcome of the election really matter, because to a great many Americans, digital communication has already rendered empirical, observable reality beside the point.” He was warning that if Trump loses, as looks increasingly likely, a large section of America that’s heavily armed may not believe it’s an accurate account of the popular vote but rather that  Biden won through fraud and cheating and that violence is the only way to rectify the problem.

First, EU chief negotiator Michel Barnier told the European Parliament that “an agreement is within reach if both sides are willing to work constructively.” :We will seek the necessary compromises on both sides in order to reach an agreement,”  he said while insisting that the EU was not seeking to undermine UK sovereignty. Barnier then talked with UK chief negotiator Frost and the two sides agreed to resume face-to-face talks. According to the FT, EU officials will travel to London to get talks underway on Thursday with the intention that negotiations will take place every day until a deal is reached — either in the UK capital or in Brussels.

The two sides reportedly want to reach an agreement in early November, which would allow for it to be submitted to the EU summit around the middle of the month. (It might also mean that the denouement of the Brexit talks will coincide with the US elections, Fed and Bank of England meetings, and nonfarm payrolls the first week of November, but never mind.) However, there are still a lot of problems to overcome after all this time negotiating. Three main areas of dispute remain:  fishing rights in British waters, fair competition rules for business, and mechanisms for resolving future disputes.

CAD on the other hand was a major loser as oil prices came off. 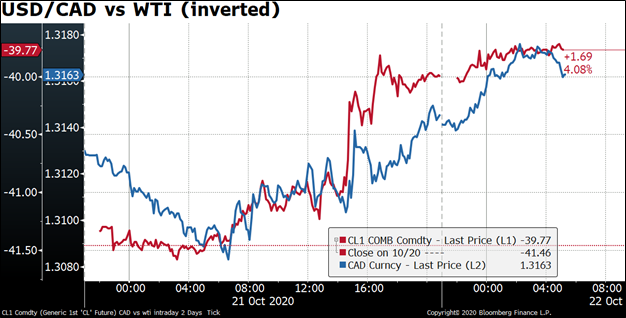 The Canadian economic news wasn’t great – retail sales for August missed expectations (excluding autos, sales were up only 0.5% mom vs +0.9% expected). But that barely showed up as a blip on the chart at 12:30 GMT, as you can see. And although sales missed expectations, they were still higher, indeed 3.0% higher than pre-pandemic levels, which is a positive sign for the economy before the restrictions went back into place in late September and early October. The Bank of Canada should still be happy with the performance of the economy at next Wednesday’s meeting and the monetary policy divergence that has driven CAD up relative to AUD and NZD should continue, in my view. 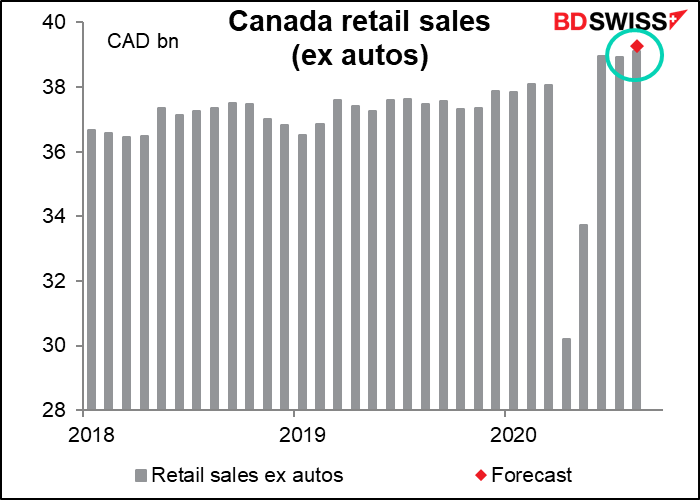 The big question for me though is why EUR is so much lower and why USD, which was down at the end of the US session, has recovered so much. Bloomberg says it happened “as allegations of attempted foreign interference in the US presidential election spurred haven bids.” Concretely, US Director of National Intelligence Ratcliffe said at a press conference Wednesday night that Iran and Russia have obtained some US voter registration data and may use it “to convey misinformation.”

So what else is new? The White House conveys misinformation every day. Did you see their video where they took Dr. Fauci’s comments out of context to make it look like he was praising the president, the same president who’s called him a “disaster” and an “idiot”? Does that send the dollar up? And why would Radcliffe’s comments spur haven bids? The only thing I can think of is that, as mentioned above, any idea that the election was tampered with might increase the likelihood that Trump and his acolytes would dispute it afterwards, thereby increasing the uncertainty.

The insanity of what’s going on was captured by a comment by Florida’s Senator Rubio, who said, “Our adversaries abroad seek to sow chaos and undermine voters’ belief in our democratic institutions, including the election systems and infrastructure that we rely on to record and properly report expressions of the voters’ will.” Given that Trump and the Republicans have been nattering on for years – years! – about non-existent voter fraud for the specific purpose of undermining confidence in the election process, this is really rich.

As for the stimulus package, I give up. I believe that Pelosi and Mnuchin may well be negotiating in good faith, but I don’t believe that McConnell Y.S. and his myrmidons will pass anything that the Democrats will agree on. Yesterday McConnell said he may “not mind” going forward with the bill after the election, but even so, it’s far from certain that he has the votes to pass it. So I still don’t think one is likely before the new Senate is seated in January.

We already had German consumer confidence. 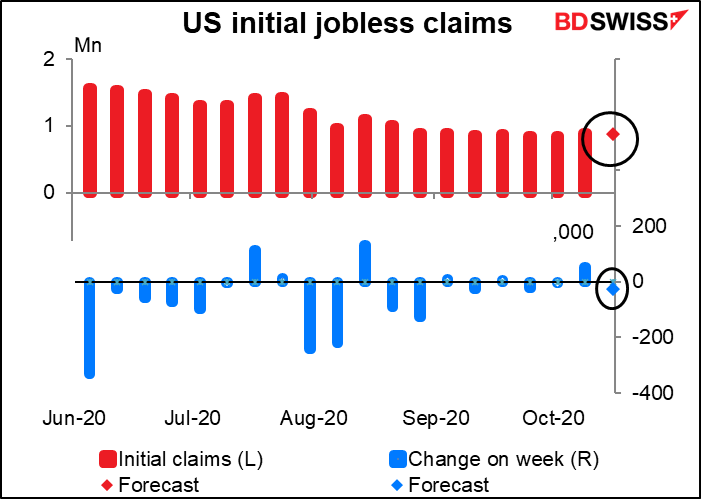 Continuing claims are expected to fall by 393k, a slowdown after last week’s 1165k decline. 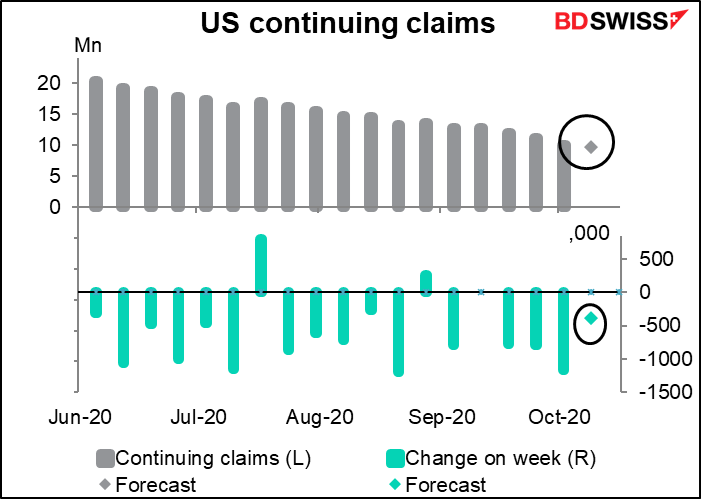 Note the increasing number of people unemployed for 27 weeks and over (green area on top). Most of those people will now have lost their state unemployment benefits and dropped out of the continuing claims figure, which is why it’s less and less a reliable indicator of the employment situation. US existing home sales are expected to rise a sharp 5.0% mom. That’s better than the pre-pandemic level, as the January & February total was up only 4.4% from the previous two months. (New home sales aren’t coming out until next week.) The forecast 6.3mn annualized rate would be the highest since 6.34mn in August 2006. The housing sector at least is doing well in the US (as it is in many other countries, too.) 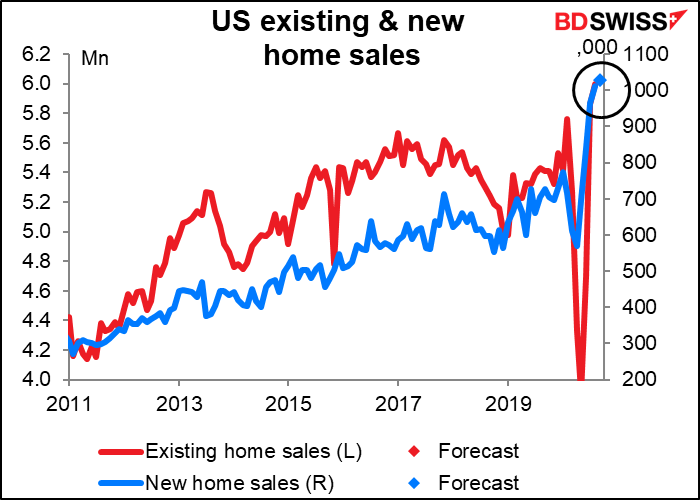 Overnight, New Zealand announces its consumer price index (CPI). I wrote a lot about this in my weekly outlook so I won’t go into great detail – you can look at it here if you’re interested. The question I addressed is, why are they so keen to implement QE, negative interest rates, and the whole megillah if their inflation rate is already in their target range and expected to rise? And the answer is, in the immortal words of President Clinton, “it’s the economy, stupid.”  The bottom line is that inflation probably doesn’t matter for them at the moment. 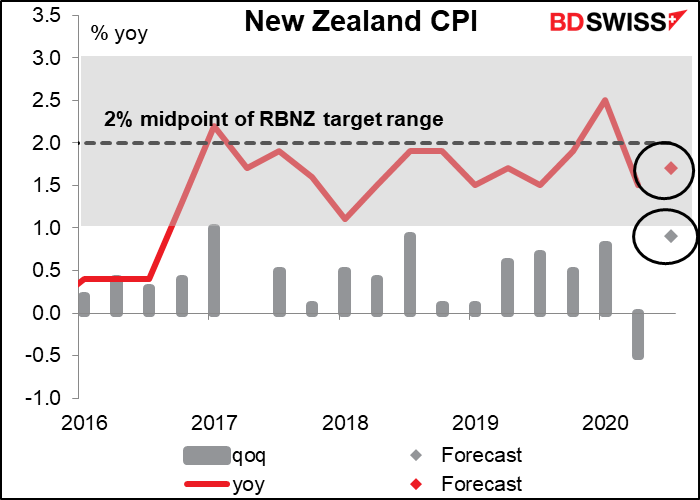 The Japan national CPI doesn’t attract as much attention as the Tokyo CPI, which comes out several weeks earlier. In any case, the annual rate of change of the core CPI is expected to remain unchanged – still modest deflation — while the headline figure drops down to no change yoy. This indicator is not likely to cause much excitement in the market. 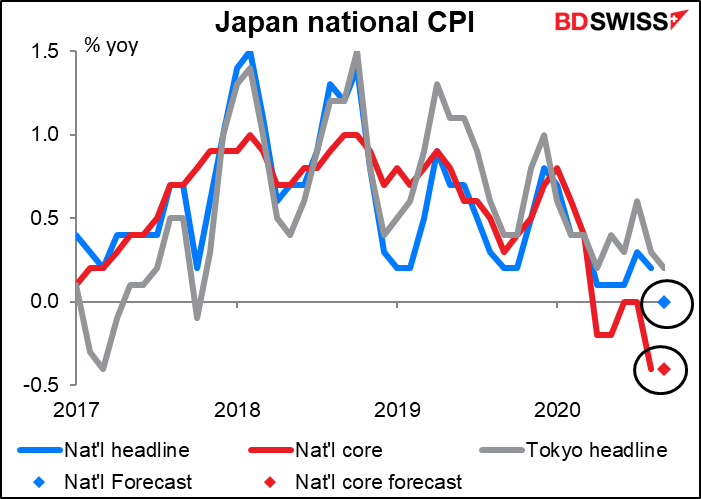 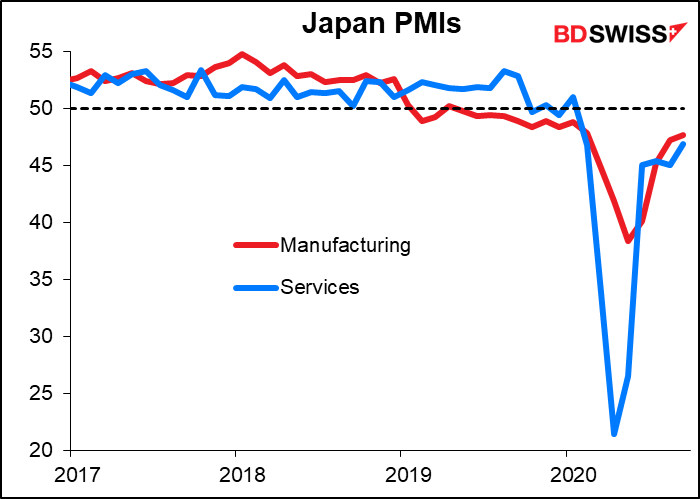 There are no forecasts for the Japanese PMIs. We could see the service-sector PMI finally poke its nose over the 50 “boom or bust” line that signifies expansion, since the Eco Watchers’ Survey, a survey of people involved in the service sector, has finally pushed back above that level. But I wouldn’t count on it. 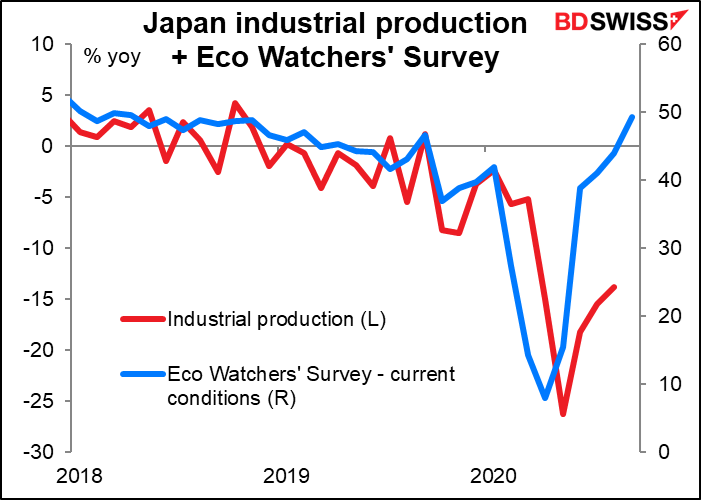 Finally, as each under eye doth homage to the new-appearing light, Britain announces its retail sales. If there’s one thing the British are good at it’s shopping. However the increase has gotten smaller and smaller each month until now, in September, it’s barely noticeable. That’s likely to be negative for sterling as it shows the recovery slowing or indeed stagnating. 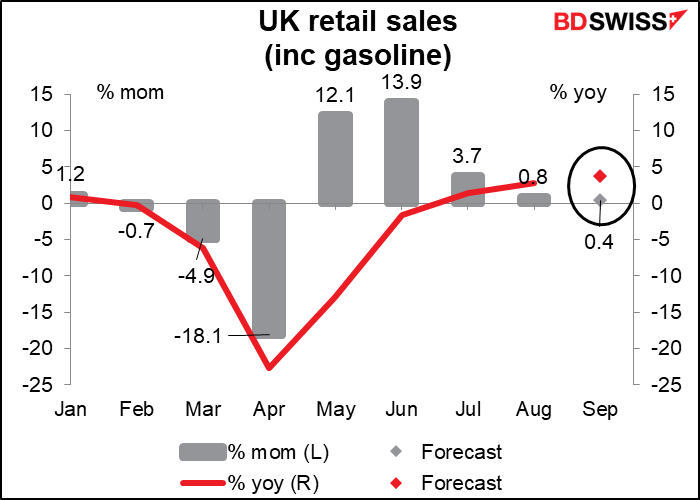 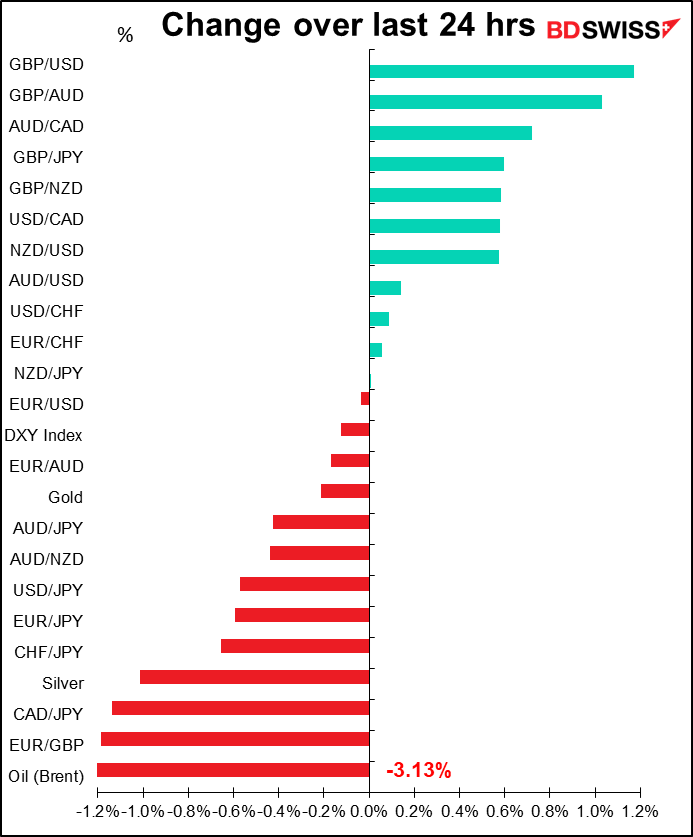