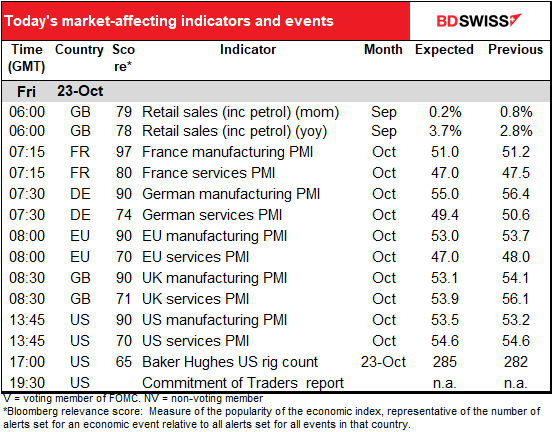 Well, I got up early enough to catch some of the debate, but only the very end, so I don’t have an opinion on the debate as a whole. What struck me in those last few minutes was that Trump spent a lot more time attacking Biden than he did presenting a positive picture of himself, while Biden did the exact opposite. Trump was trying to scare people away from voting for Biden, whereas Biden was trying to attract people to vote for him. One emphasizing the negative, the other the positive. I think that’s Biden’s whole strategy in a nutshell. It’s an odd tactic for an incumbent, who normally would be running on his record.

Reading the summaries in the press (NY Times and Washington Post, not Fox News) they agree that Trump did better than last time in that he wasn’t as rude, but on the other hand he didn’t have any big wins or score any major points. So the debate left both candidates more or less where they were before, which is good for Biden as he’s ahead.

I can’t believe I have to start off each comment with a discussion about the stimulus bill in the US. I thought last Tuesday was the deadline! But they’re still talking. House Speaker Pelosi said Democrats and White House officials are closer to a deal, but negotiators still haven’t solved the issues of state and local funding, and liability protections for businesses. The key phrase was that Pelosi said “I think we’re just about there.” And after the stock market closed, White House Chief of Staff Meadows indicated that negotiations had entered a new phase with a focus on technical language in the proposal.

Pelosi & Mnuchin may be “just about there,” but the question for me is, as always, is McConnell Y.S. there too? The White House can negotiate with the Democrats all they want, but if the Senate doesn’t go along, the bill won’t become law. I haven’t seen any indication that the Senate is in any mood to pass the kind of bill that they’re talking about.

Nevertheless, that seems to be what was powering the markets yesterday – the hope-against-hope that something would get done seems to have been behind a “risk-on” mood in stocks and the FX market.

The underperformance of CAD was notable, given that oil had a good day. Oil rose after Russian President Putin said the country is open to delaying the increases in OPEC+ oil production that are scheduled to go into effect from January, or even willing to cut output further if necessary.

The question I have today is, why did AUD outperform CAD? CAD was largely following oil during most of yesterday, although a big gap opened up just as Asia started trading this morning – probably due to less attention being paid to the currency during the Asian trading day, or less liquidity in the market. 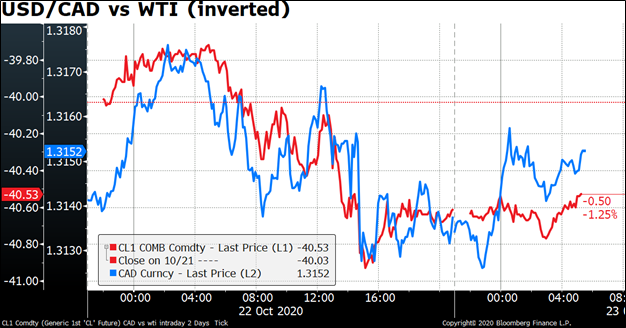 But it turns out AUD was moving more or less in line with oil too, although not as closely as CAD. And both CAD and AUD are coming off in Asian trading, as is oil. So CAD, AUD, and oil may all have been moving together on risk sentiment.

In short, I’m not sure the divergence between AUD and CAD today can be explained. 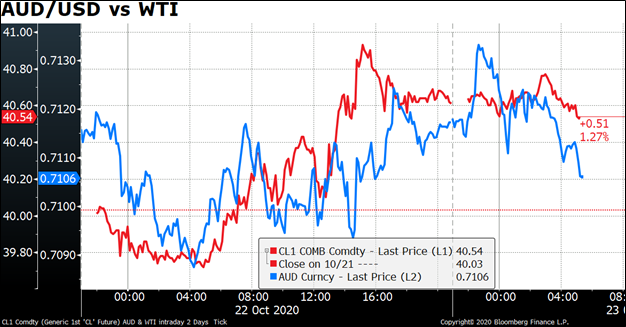 GBP was the biggest underperformer. In the absence of any significant Brexit news, it just fell steadily throughout the day, perhaps on profit-taking after the previous day’s gains. We’ll be waiting to hear what the two sides have to say next week as the real, final, this-is-it deadline of 15 November approaches. I had expected a “no-deal” Brexit but now it looks like PM Boris “The Big Umbrella” Johnson will fold as usual and a last-minute agreement is looking more possible. That’s particularly so after the Lords excoriated the despicable UK Internal Market bill this week, making it unlikely that it will pass with the parts that the EU finds so objectionable.

EUR was also weak. Rising virus cases are weighing on activity. The high-frequency mobility indicators for the Eurozone have weakened since late September and now there are restrictions on activity in some places. The slowdown makes it more likely that the European Central Bank (ECB) will have to ease further at some point. We’ll be able to gauge the impact better later this morning when the preliminary purchasing managers’ indices are released (see below).

I think EUR/USD is a race to the bottom: the ECB may have to ease, but if the US doesn’t pass a stimulus package soon, the Fed may have to ease, too. Not to mention all the chaos that ‘s possible if (one hopes) Trump loses the election.

The key point to note is that they are all expected to be either (more or less) unchanged or lower. Not one is expected to be substantially higher. It’s particularly a shame for the EU service-sector PMI, which hasn’t even recovered to the 50 line yet. It’s expected to show that the service sector is contracting at an accelerating pace. It may therefore be negative for the EUR, especially as the US service-sector PMI is forecast to be unchanged at a relatively healthy level. The UK version too is expected to decline but remain solidly in expansionary territory. 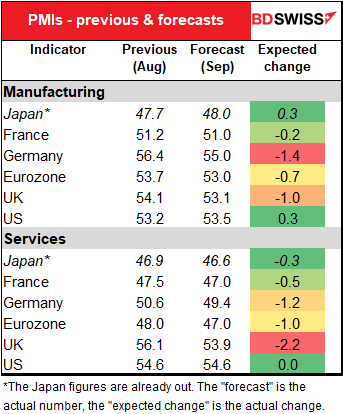 The forecast for the Eurozone composite PMI (not shown) is that it will fall back to 49.2 from 50.4. That would be the first time since June that the composite PMI has been below the 50 “boom or bust” line indicating that the Eurozone economy as a whole is contracting. 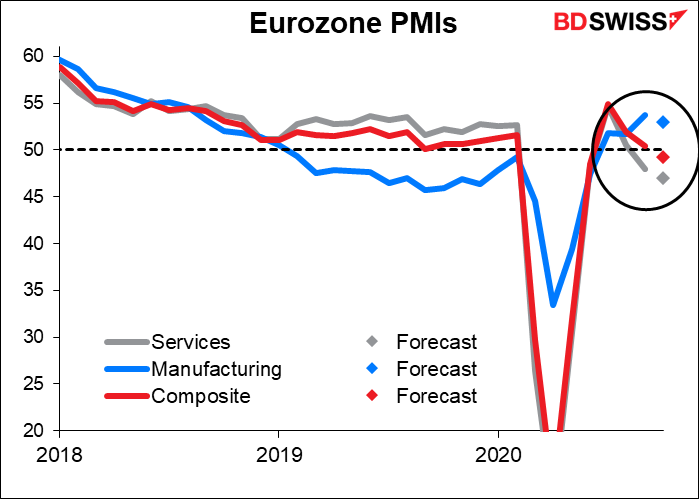 The data correspond to other, high-frequency data that shows the recovery stalling. The exception is the US, where the recovery seems to be continuing, as would also be indicated by the above-50 levels for the US manufacturing and service-sector PMIs. 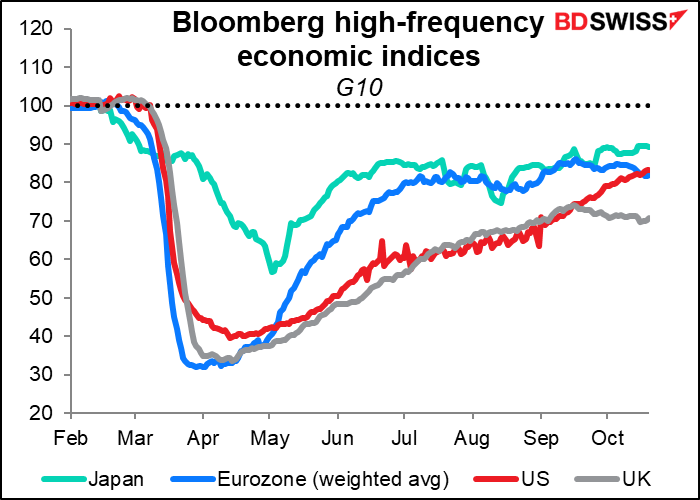 And that’s it for the day! So I’m going to mail in my ballot and then head off to the beach to catch one of the last days in the sun (yes, it’s still warm enough for the beach here in Cyprus – 28 degrees. Eat your heart out, Britain!). We have an amazing two weeks ahead of us and I have to get plenty of rest beforehand.

If you want to see what’s up for next week, later today please check out my Weekly Outlook once it’s posted on the website. There are three major central bank meetings – Bank of Canada on Wednesday and Bank of Japan the European Central Bank on Thursday. Plus the end-month Japanese data, first estimates of Q3 GDP for the US and EU, and some important US data, such as personal income & spending. Plus the 5th Plenum of the Chinese Communist Party. And of course the US elections and Brexit negotiations are fast approaching their denouement. Busy busy busy!

Don’t forget to register for our webinar on Tuesday about the US election. You can register at: https://www.bdswiss.group/webinars/ 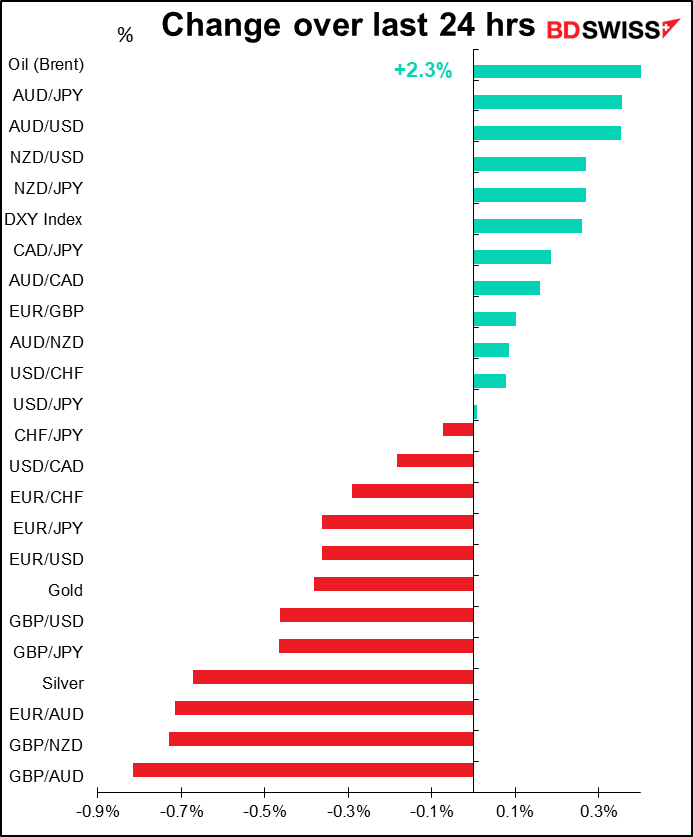