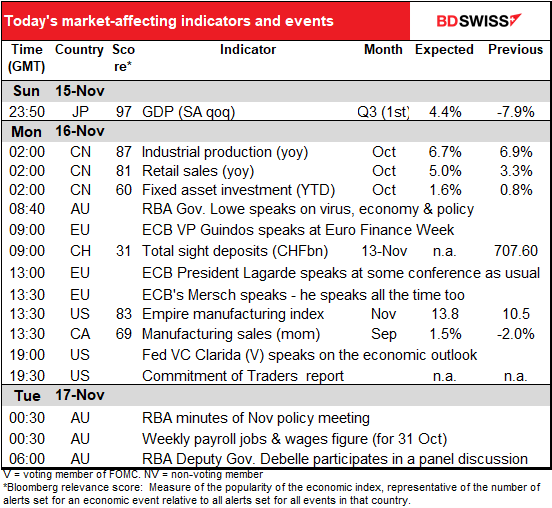 The week is starting out with a general “risk-on” tone that’s propelled the commodity currencies higher and the dollar lower.

Sunday’s news that China and 14 other countries agreed to set up the world’s largest trading bloc, encompassing nearly a third of all economic activity, encouraged sentiment. Many in Asia hope that the Regional Comprehensive Economic Partnership, or RCEP, will hasten the recovery from the pandemic. The accord will take already low tariffs on trade between member countries still lower over time.

Then Japan’s Q3 GDP beat expectations, rising 5.0% qoq vs +4.4% expected. But the composition of that growth was disappointing – both private consumption and business investment were weaker than expected. Much of the growth came from exports and the two massive fiscal stimulus packages. Looking ahead, the slowdown already evident in some high-frequency indicators suggests that growth is likely to slow. PM Suga is already putting together a third supplementary budget, but that will only reduce the fiscal drag, not boost growth. 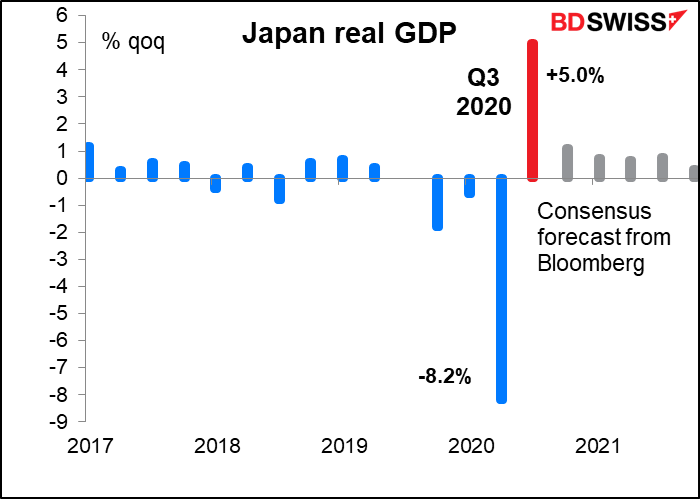 Japan’s downturn was slightly less severe than other major countries, but its recovery is expected to be slightly slower as well, putting it a bit behind the US and Eurozone with regards to when it’s expected to return to pre-pandemic levels. Of course the forecasts are subject to change without notice. 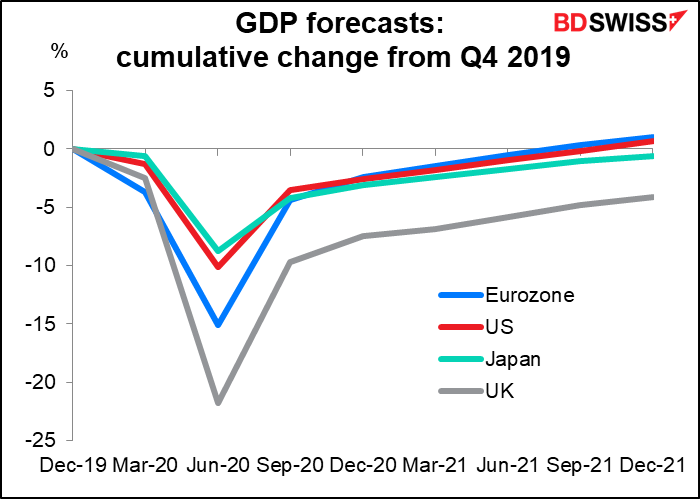 Shortly thereafter, China’s monthly indicator trio – retail sales, industrial production and fixed asset investment (FAI) – showed continued improvement, although not always as much as expected. Industrial production beat estimates slightly (+6.9% yoy vs +6.7% estimated, 6.9% previous) as did fixed asset investment (+1.8% yoy YTD vs +1.6% estimated, 0.8% previous). Retail sales on the other hand were significantly below estimates (+4.3% yoy vs +5.0% estimated, 3.3% previous) but significantly above the previous month anyway. The data suggest that China continues to recover from the pandemic, aided by government stimulus policies and strong export demand. 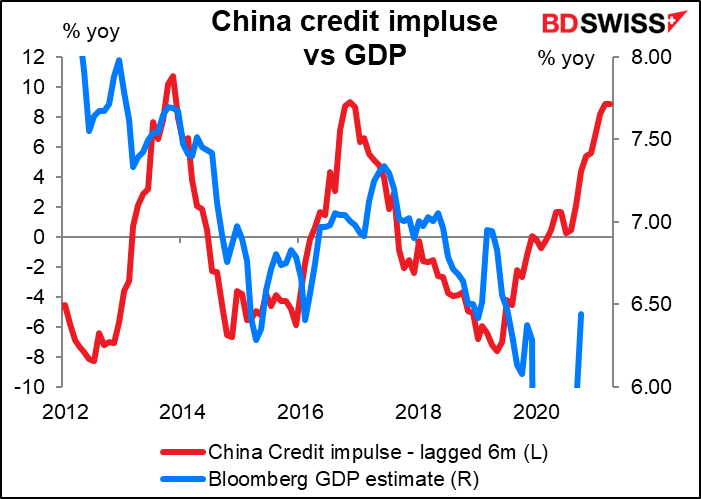 The generally good news spurred a “risk-on” mood, pushing stocks higher and propelling copper prices to a two-year high. In addition, there are hopes that Moderna, another pharmaceutical company working on a virus vaccine, may announce favorable trial results this week as Pfizer did last week. The S&P 500 index was indicated up 1.0% at the time of writing.

Against this background, the outperformance of the commodity currencies and the underperformance of USD, CHF, and JPY were simply the normal knee-jerk reactions. 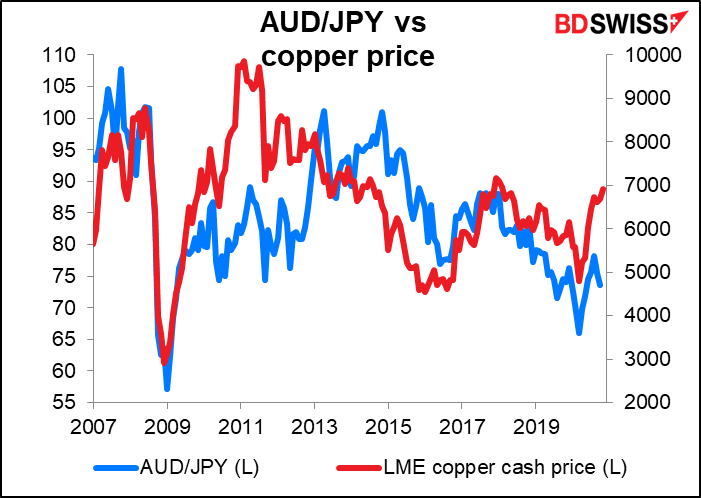 The big excitement for the day is already over, as mentioned above.

Reserve Bank of Australia (RBA) Gov. Lowe makes an unusual evening speech that will spill over into the European morning. He’s talking on “Covid, Our Changing Economy, and Monetary Policy.” There’s probably not much more to say that he didn’t already cover in his detailed speech on 3 November about the Bank’s November policy easing measures. The key point will probably be whether he shares in the “cautious optimism” we heard from Fed Chair Powell and ECB President Lagarde last week about the recent vaccine news.

After that there are several European Central Bank (ECB) speakers, but we’ve heard from most of them recently anyway.

Switzerland has been able to cut back on intervention recently as EUR/CHF has trended higher of its own accord. Today’s sight deposit figures are likely to show more of the same, given the movement in EUR/CHF. 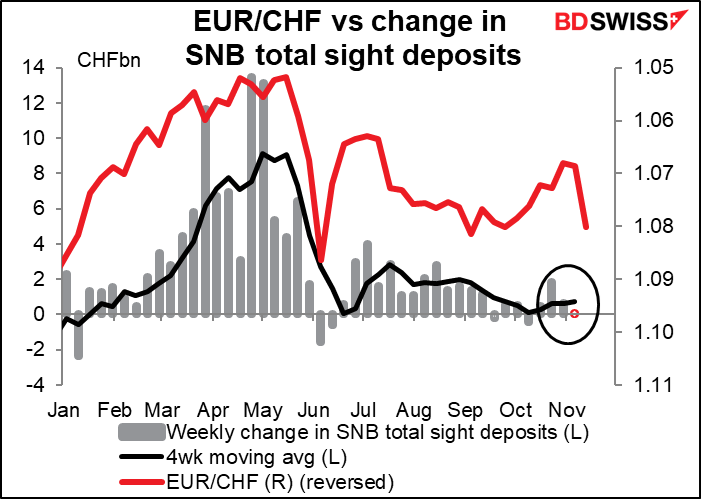 Then there’s nothing on until North America opens for business, whereupon we get the Empire State manufacturing survey. It’s expected to rise a bit further into expansionary territory but not much. It suggests that the slow recovery is continuing. 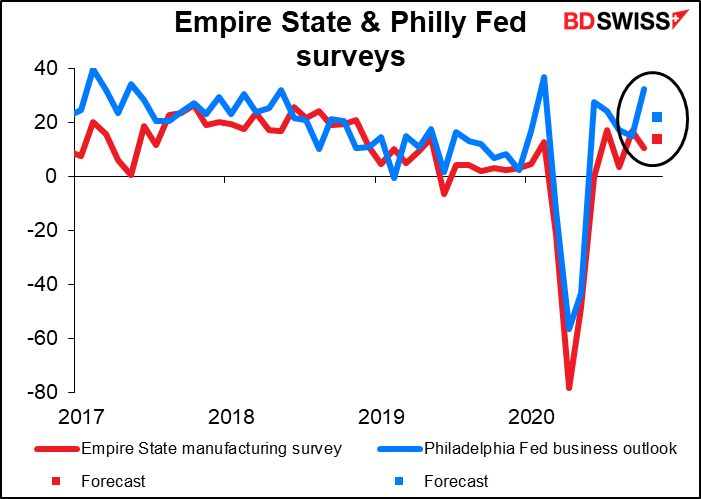 Canada’s manufacturing sales are expected to rise by a modest 1.5% mom. No surprise that six out of the 11 economists forecast that number, because that was the flash estimate. 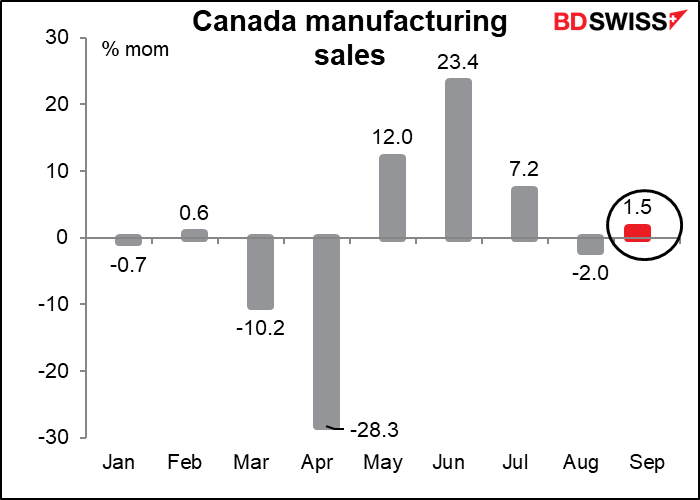 Note that the Commitments of Traders Report is coming out tonight instead of Friday, because of the Veteran’s Day holiday last week. 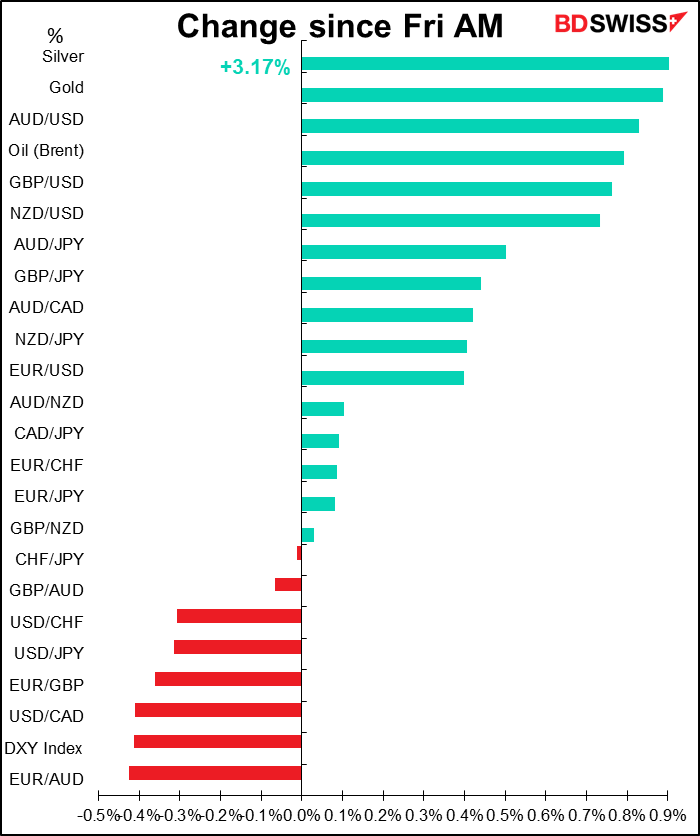