Yesterday was yet another big up day for stocks after Moderna announced that its vaccine candidate was 94.5% effective in a phase three trial and needs less refrigeration than Pfizer’s. The efficacy rate puts it above such standard vaccines as polio and mumps. Also, there were reports that advisors to President-Elect Biden had ruled out a national lockdown, which reduces the risk to the economy – albeit at an increased risk to health.

However, reactions in the FX market were muted, with only the usual “risk-on” trades. Nothing much to say on that front in fact as there weren’t any major movements and no glaring anomalies that need explaining. 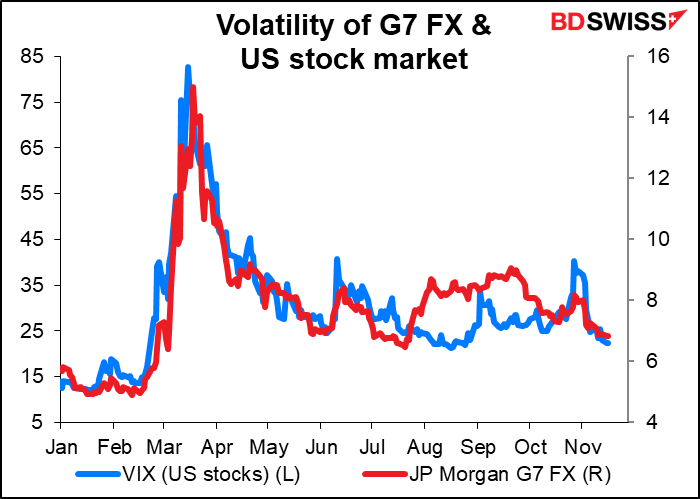 With two vaccines now possible, Fed Vice Chair Clarida yesterday was more positive than Fed Chair Powell was in the latter’s comments from the Sintra symposium last week. Clarida said he had always assumed a vaccine in formulating his baseline forecast for 2021, and now he has “more conviction in my baseline for next year and more conviction that the recovery from the pandemic shock in the US can potentially be much more rapid than it was from the global financial crisis.” Also, US consumers have improved their balance sheets, as incomes actually rose thanks to government payments while opportunities to spend decreased, resulting in higher savings – plus record-low mortgage rates have allowed many people to refinance their mortgages. Nonetheless, Clarida said he believed additional fiscal and monetary policy measures would likely be needed, which seems to be the position of most Fed officials as the Republicans are taking a “scorched earth” approach to their losing the White House and won’t take any steps to improve the economy.

The optimistic outlook contrasts with a rather pessimistic view on the immediate future as the number of cases continues to grow worldwide and governments here and there – even in Sweden – enact stricter measures to deal with the problem.

Elsewhere, there’s a potential problem brewing for the euro. Hungary and Poland yesterday blocked the EU’s long-term budget and recovery fund because of conditions attached over the rule-of-law, which could cause them to lose some subsidies if they continue their current policies. The budget has to be approved unanimously by the 27 member states for the European Commission to be able to issue joint debt. The bloc’s leaders will hold a video conference Thursday on their response to the pandemic. We can expect a heated debate there  – taking time away from any discussion of Brexit, if indeed there is any. Failure to approve the budget and the joint debt would mean more of the burden of supporting the Eurozone economy would fall to monetary policy, which is already nearing the limits of the possible. That would probably weaken the euro.

A quiet day during the European morning – nothing on really, not even a speech by ECB President Lagarde (don’t worry – she’s speaking this evening).

Is this the day that the Senate votes on Judy Shelton? See my Weekly Outlook for details on what that charade might mean for the markets. Since writing that piece I discovered why the Republicans might suddenly be interested in going forward with this appalling appointment after sitting on it for over a year. Not that they particularly want to get utterly unqualified Shelton on the Board of Governors, but rather they simply want to deny President-Elect Biden the opportunity to appoint someone he wants. So much for Biden’s hopes of a new spirit of bipartisanship – they’d rather stick an incompetent person on one of the most powerful decision-making bodies in the world than let a Democrat appoint someone.

However, Shelton’s candidacy has hit an unexpected obstacle: a third Republican senator, Tennessee Senator Lamar Alexander, said he opposes her nomination, although he won’t be in Washington to vote on it. Florida Republican Rick Scott is quarantining because of possible exposure to the coronavirus and also won’t be present, while two Republicans have said they oppose Shelton and will vote against her. That means there would be 49 Republicans present to vote in favor of her. If all 47 Democrats and independents vote against, plus the two Republican senators who oppose her, that would mean a 49-49 tie, which VP Pence could break. The math is finely balanced and any unexpected absences could disrupt it. On the other hand, Arizona Senator-Elect Mark Kelly, a Democrat, will be seated at the end of the month after winning his special election. He would give the Democrats the votes they need to keep her off the Board. We’ll have to see what McConnell decides to do.

The action begins when North America comes in. Then, we get Canadian housing starts. They plunged in September as multi-unit starts collapsed by 27% mom, their largest decline in nearly five years. This was despite no substantial decline in permit issuance, which suggests that the fall was due largely to delays or to projects being put off. After such a big decline there’s likely to be some rebound this month. If not, it would suggest a major change in the housing market, perhaps due to an anticipated change in immigration levels. 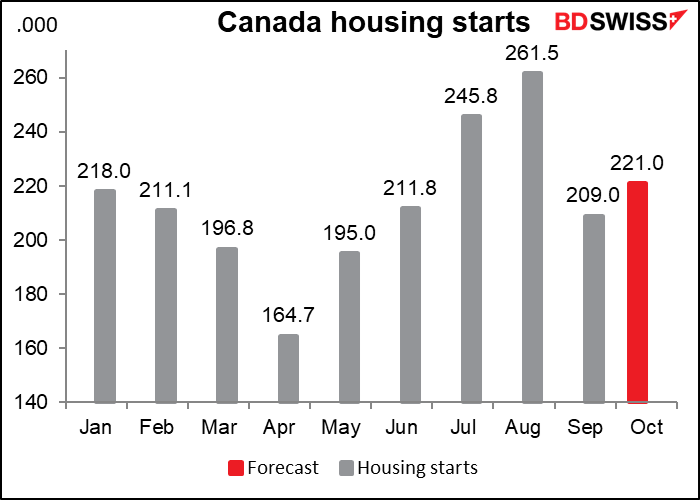 Growth in US retail sales is expected to slow somewhat, especially at the headline level, as sales of autos fell slightly last month. 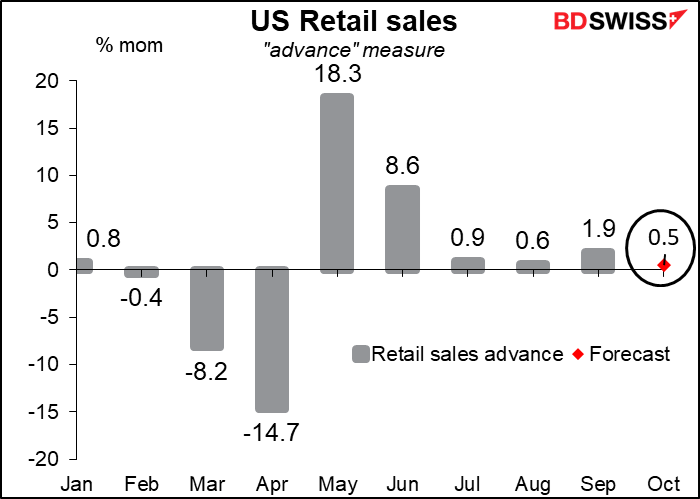 That would still be enough to keep retail sales a healthy 4.5% above pre-pandemic levels. 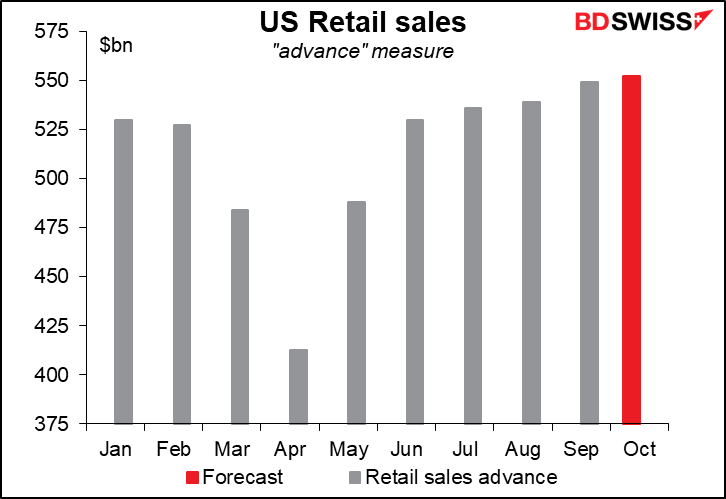 Nonetheless, past performance is no guarantee of future performance. With virus cases surging across the US and renewed restrictions coming into force in many states, it’s almost inevitable that spending will fall over the next few months. And when the special unemployment payments under the CARES Act expire in January, many people won’t have any money to spend even if they had any place to spend it. October or November could be the high point for retail sales for now.

US industrial production is forecast to be up a relatively healthy 1.0% mom, the largest rise in three months, but this would still leave it a depressing 6.2% below pre-pandemic levels. 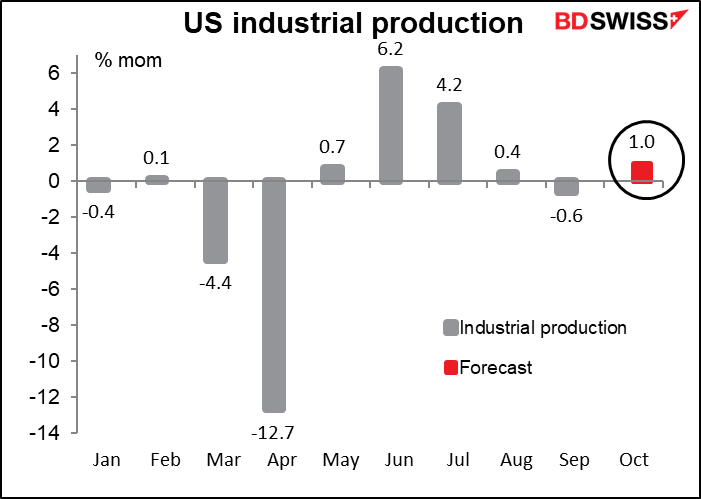 Production seems to have plateaued. With the virus spreading, many businesses being shuttered and growth now slowing if not stalling, that’s not a good place to be starting from. 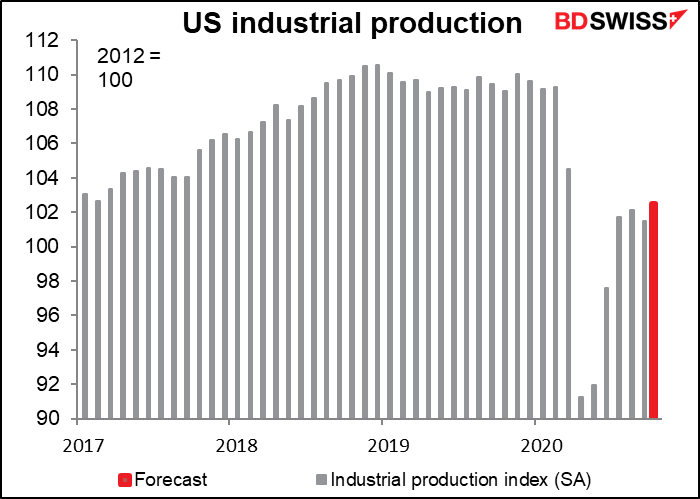 In the European afternoon we have a variety of speakers, including Bank of England Gov. Bailey (who spoke three times last week) and European Central Bank (ECB) President Lagarde (also three times last week). Bank of Canada Gov. Macklem will be on a panel discussion on “Sustainable Finance and the Transition to a Low-Carbon Economy.” And four regional Fed presidents will participate in one of a series of discussions on the economic impact of racism. Today’s talk is “Focus on Employment.”

There are no forecasts for the Treasury International Capital (TIC) flow report, which documents the investment funds flowing into and out of the US. What it’s shown recently is that the long-term flows (money into long-term bonds, for example) have been a net zero, more or less, for the last few months (black line). The total flows (grey line) have been a net inflow. That means most of the money coming in is going into short-term funds – meaning it’s highly speculative and can be reversed quickly. 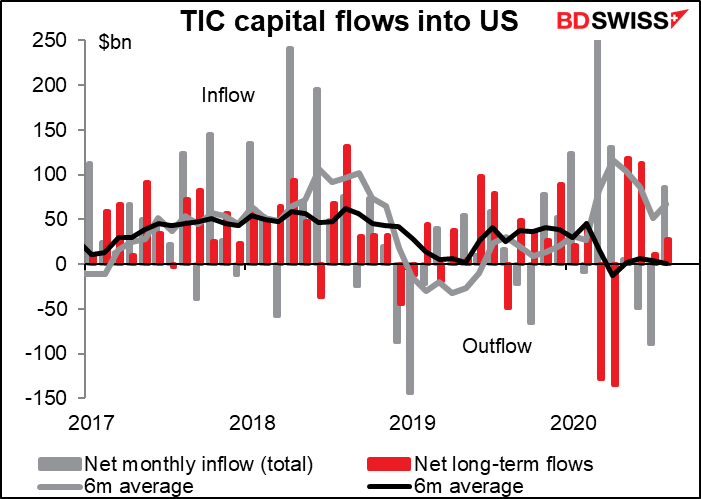 After that it’s all pretty quiet until the next day, when Mum puts the tea kettle on and Vanessa Feltz comes on the radio.

Growth in the headline UK consumer price index (CPI) is expected to be unchanged at +0.5% yoy, still way below the Monetary Policy Committee’s area of tolerance (2% ±1 percentage point). The core inflation rate is also forecast to remain unchanged. Normally inflation remaining so far below target would be a key figure for sterling, but I doubt if it will have any significant effect this week as we come down to the wire with Brexit. 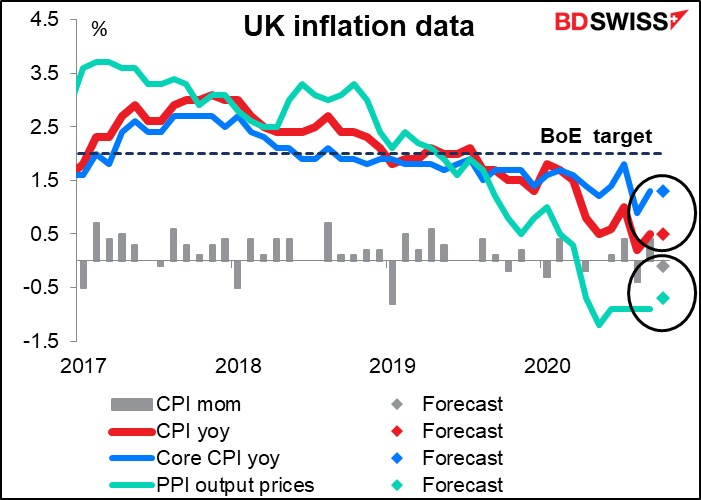 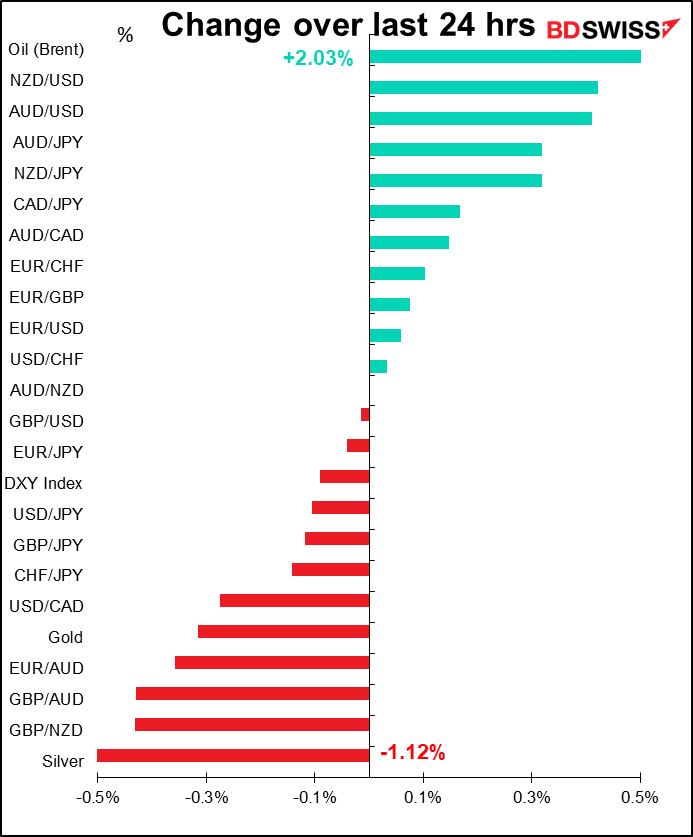