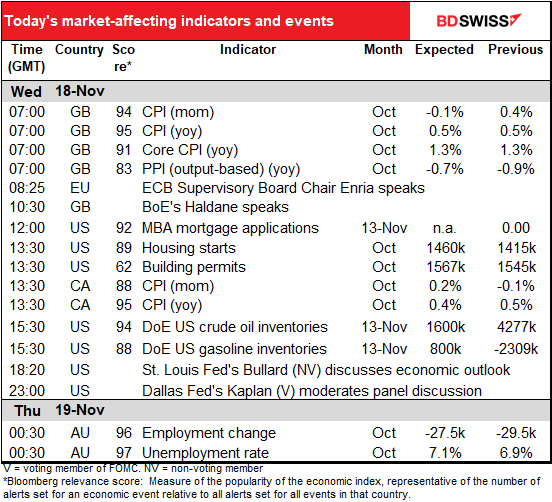 The tug-of-war between virus pessimism and vaccine optimism continues. Yesterday it was the turn of the pessimists, perhaps spurred by ECB President Lagarde’s comments that the vaccine is “not a gamechanger.”

There are indications that the lockdown is beginning to work in Germany. The growth rate in new COVID-19 infections in Germany has come down significantly in the last few days. This suggests the virus is peaking or has peaked in Europe (the latest seven-day average is 131k vs a peak of 153k on 5 November). However, the cost of that victory is of course the lockdown – that’s going to impinge on economic activity for the time being. 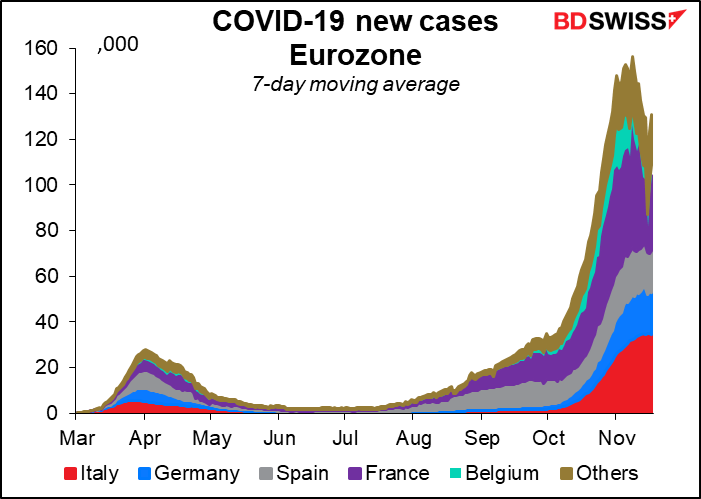 In the US however there’s no sign of a peak – the latest seven-day average, at 158k, was a record high. Some US states are reimposing restrictions in one form or another but with Thanksgiving coming up, when a lot of people will no doubt gather in family groups to eat too much and watch football on TV, I would guess we haven’t seen the peak in the US yet (see below for one nurse’s observations). 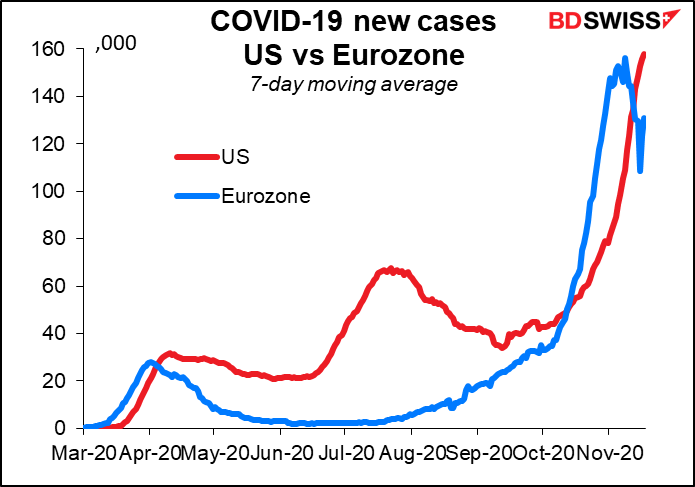 So far this “public health policy divergence” hasn’t affected EUR/USD much, but it could. 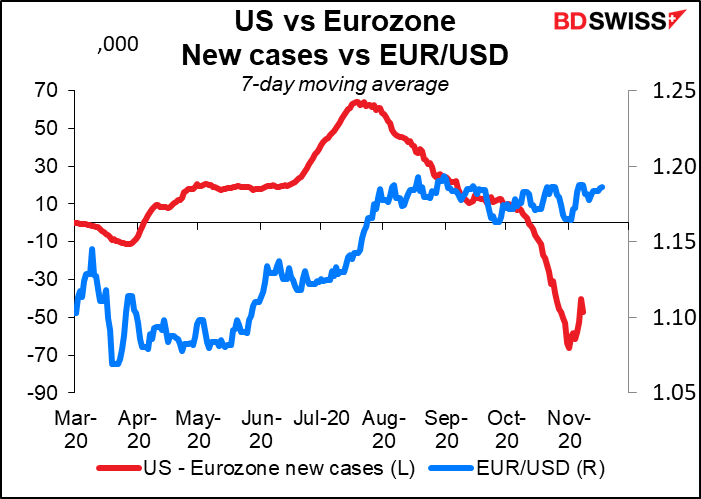 Meanwhile, Asian markets are lower this morning after Tokyo saw a record 493 new cases. This is nothing for a city of 13.9mn people compared to what’s going on elsewhere in the world (South Dakota, mentioned below, had an average of 1,458 a day over the last week with its population of 884,659) but it’s a lot for Tokyo. 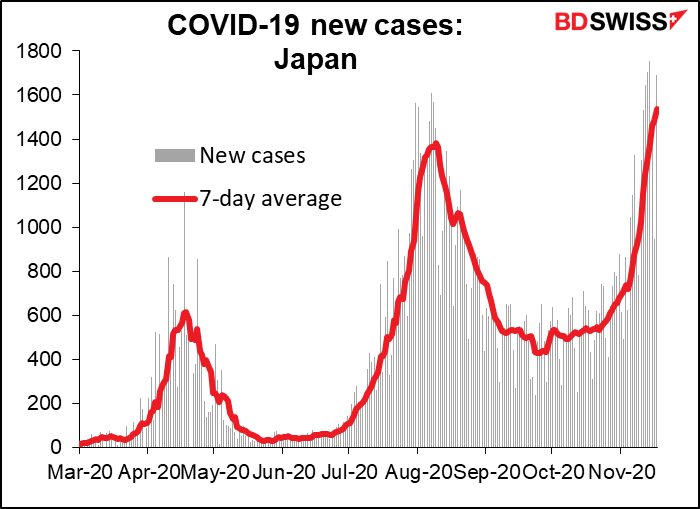 The Democrats in the House of Representatives sent a letter to the Republican Senate leader McConnell Y.S. asking him to restart the negotiations about extending the expiring CARES Act, but there’s no sign that either side is willing to compromise on the size of the package.

The continuing rise in virus cases, plus a disappointing US retail sales number yesterday (+0.3% mom vs +0.5% expected, previous month revised down to +1.6% from +1.9%), helped to depress US stocks.

Finally, there are also concerns about US policy towards Iran: it appears that Trump is trying to increase US sanctions against the country and that he recently asked his advisors for options to launch a military strike against it (they convinced him not to).

In this “risk-off” environment, JPY and CHF gained while the commodity currencies were lower. Sound familiar?

There was some action around GBP as hopes grew for a Brexit settlement. UK chief negotiator Frost reportedly told PM Johnson that a deal could be ready next week. The FT quoted Ireland’s prime minister as saying that both sides can see the “landing zones” for a free trade agreement as both softened their stance on fisheries, which has been one of the major sticking points in the negotiations. (A ray of hope? The negotiations are no longer floundering? Any suggestions welcome – please send to [email protected] Extra points awarded if you can sneak in the name of the state fish of Hawaii.)

While the theoretical deadline for a deal is fast approaching, the EU is said to be considering changing the classification of any deal to “EU-only” rather than a “mixed agreement.” I have no idea what either classification means, but apparently an “EU-only“ deal would only require the approval of EU leaders and the European Parliament rather than having to be ratified by each national parliament. That could give them some wiggle time to drag the negotiations out further.

It’s noticeable though that GBP is not really exploding on these hopes. A Bloomberg survey yesterday suggested that a deal would only push GBP/USD up another 2% or so to $1.35, while failure to reach agreement could push it down to $1.25 by the middle of next year.

Good news! The US Senate failed to confirm the appalling Judy Shelton as the next member of the Fed’s Board of Governors. This wasn’t due to any great change of heart among the Republicans but rather thanks to the virus, as several Republican senators were in quarantine and couldn’t vote. They could bring her up for another vote later, but at the end of the month one of the Republican seats will flip to a Democrat, making it even harder for her to win confirmation.

Other matters (not necessarily market-related)

In my Weekly Outlook I quoted a nurse from South Dakota lamenting how so many of her patients were refusing to acknowledge the existence of COVID-19 even as they lay dying from the disease. She appeared on TV recently – you can see her here. You should listen to her pitiful story. As a bonus, you can also hear the Republican governor of the state say “My people are happy, because they’re free.” This in the state with the highest positivity rate in the country (58%) and the second-highest infection rate in the world. Free indeed – free to die.

Good news though – a recent Gallup Poll showed that 58% of Americans said they’d be willing to be vaccinated, up from 50% in September. The poll was taken before the news of a possible vaccine broke. Most of the people who say they wouldn’t get it cite concerns about how safe or effective a vaccine rushed out like this is, not concerns about vaccination in general. That suggests greater compliance by the end of the year.

Separately, S&P decided to include Tesla in the S&P 500 index. This sent the price of the company’s stock shooting up 13% (because index-tracking funds will have to buy it). The stock rose so much that the increased value of the company was more than the entire market capitalization of Moderna, the company that just announced a successful vaccine against COVID-19. This is the ultimate victory of finance over manufacturing. As Bloomberg commentator John Authers observed, “the selection committee of the S&P 500 have managed to create more market value by adding Tesla to an index than the team of scientists at Moderna did by inventing a successful vaccine against a global pandemic.”

We discussed the UK inflation data yesterday. As it turns out, the figures showed inflation slightly higher than expected, which should be positive for sterling.

Then once again it’s just a few speakers during the European day, until dawn breaks over the Statue of Liberty and the Mortgage Bankers Association (MBA) releases its weekly index of mortgage issuance for house purchases. It’s still running well over the average, although it’s started to turn down a bit. 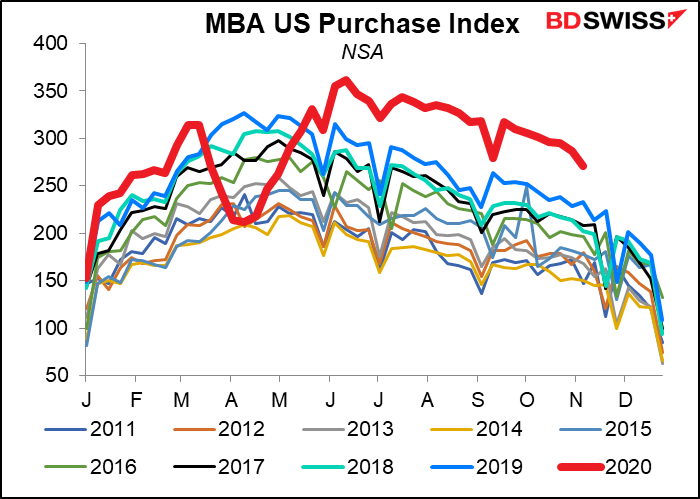 That’s followed quickly by another housing indicator, housing starts and building permits. Permits have been far outstripping starts, but starts are expected to make up some of the ground this month – they’re forecast to be up 3.2% mom vs a 1.5% mom increase in permits. The housing market in the US is booming — yesterday’s National Association of Home Builders (NAHB) index unexpectedly jumped to a new record high of 90, up from the previous record of 85 (expected to be unchanged at 85). 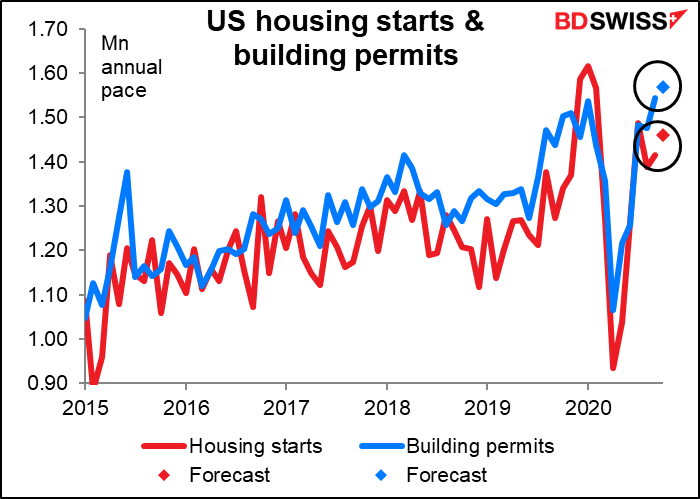 Canada’s consumer price index (CPI) is expected to stay outside the Bank of Canada’s target range for the eighth consecutive month. In theory the Bank isn’t monitoring the headline measure but rather the three core CPI measures, which are all well within the target range – they’re forecast to average 1.73% yoy this month. But with Bloomberg relevance scores of from 7 to 12, it appears no one in the market pays much attention to them. In any event, the Bank isn’t going to ease any further just because of below-target inflation nor will an unexpected acceleration in inflation cause them to tighten, so this figure will only effect real yields on Canadian bonds, not monetary policy. 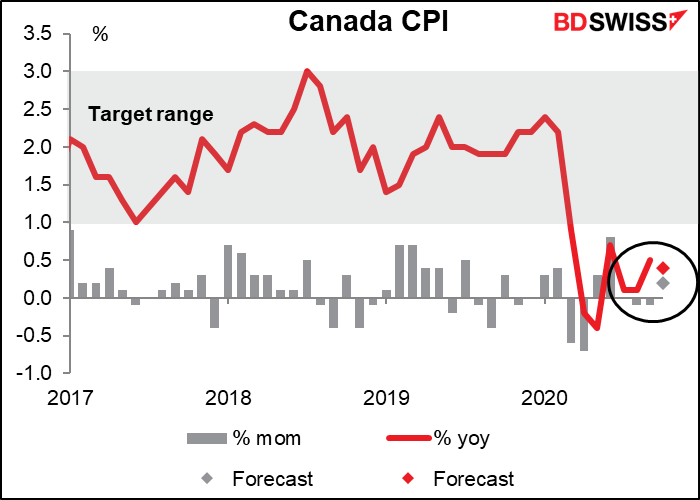 Then it’s the weekly US oil inventory data. Oil inventories are almost within the normal range for this time of year. They’re just 6.7% above average, down from a peak of 19.0% in July. 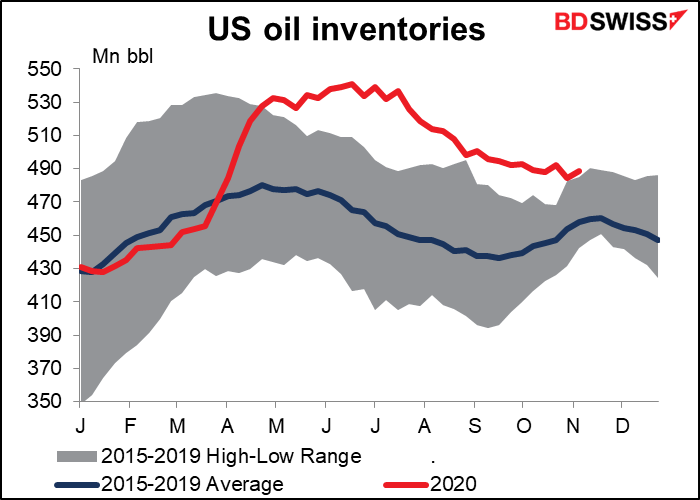 Gasoline inventories are within the normal range for this time of year, albeit at the high end of normal. The question is, is this a normal time?

As you can see, the amount people are driving in the US is far below normal. So far this year, Americans have only driven 87% of what they drive on average (average being for the previous five years). Furthermore, although we’re far away from the peak driving season, it looks like they’re going to drive even less than normal for the next few months — no more going to Grandma’s house for Thanksgiving or Christmas. Normal inventories are probably excessive then and need to be run down further. 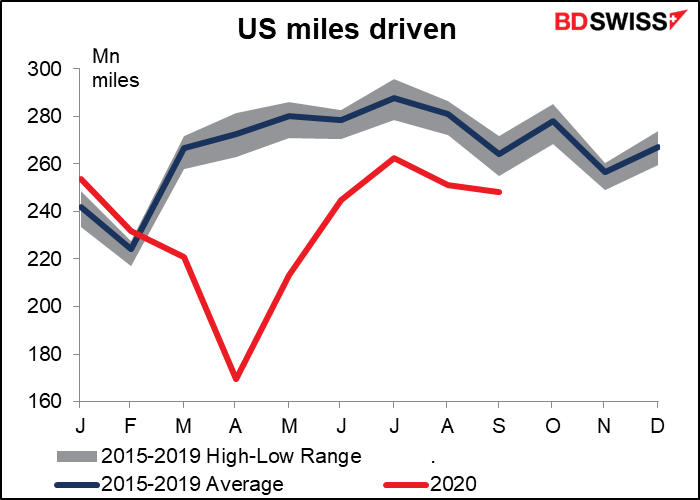 Then overnight, as the emus emerge and the joeys start jumping, Australia employment data for October is set to rock the nation. Well, probably not. On the contrary, the data are likely to be more or less ignored, as they’re distorted by the tail-end of Victoria’s second-wave lockdown measures. The measures were only lifted in Melbourne, Australia’s second-largest city (accounting for some 20% of Australia’s total population), at the beginning of November. 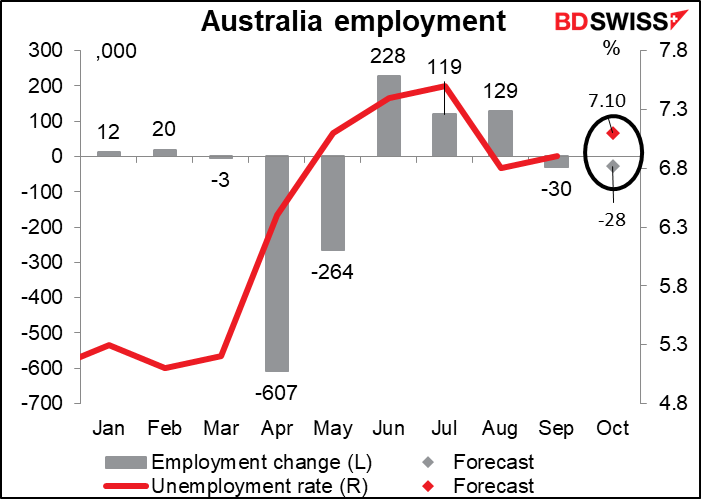 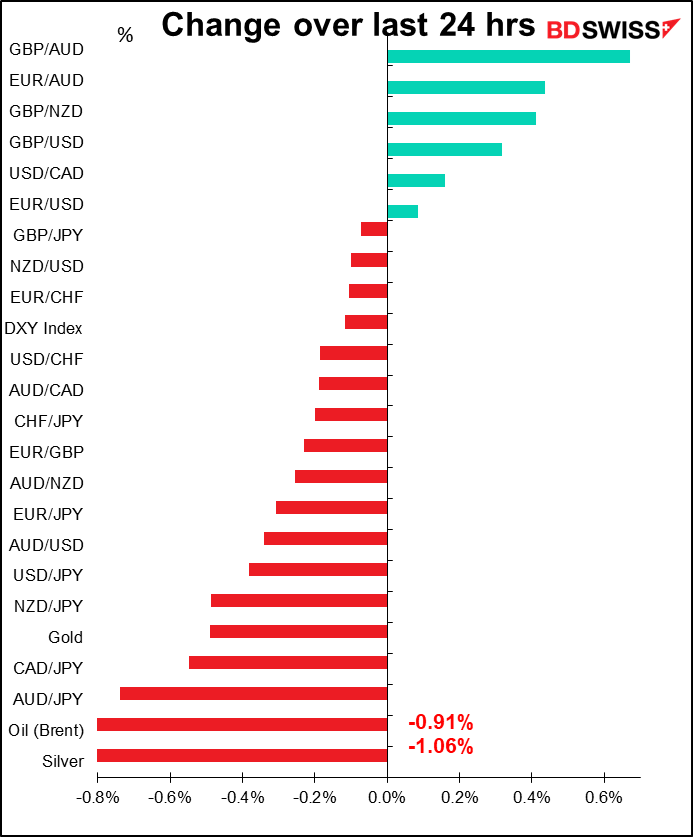