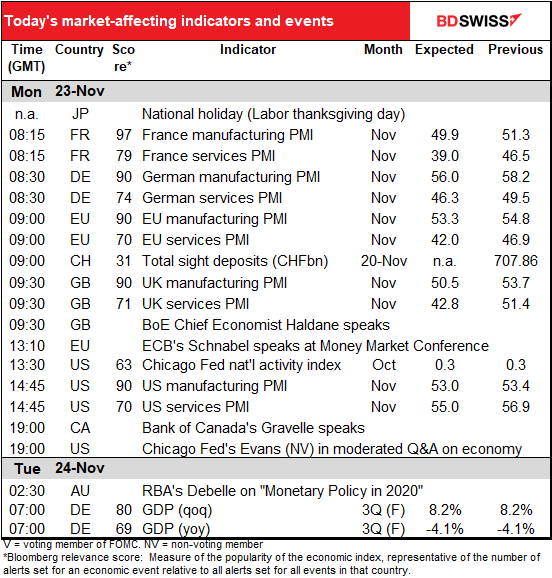 It’s a generally “risk-on” environment this morning as the US talks about starting vaccinations soon. Most stock markets in Asia are higher this morning and the S&P 500 index is indicated to open +0.3%.

The head of the federal government’s program to accelerate a vaccine Sunday said that vaccinations against Covid-19 in the US will “hopefully” start in less than three weeks. Moncef Slaoui, head of the US government’s Operation Warp Speed, said that “On the 11th or on the 12th of December, hopefully the first people will be immunized across the United States.” He was appearing on CNN’s “State of the Union” TV show. He said the US should achieve a 70% immunization rate around May, which “would allow for true herd immunity to take place.”

Before then though there are plenty of opportunities for people to behave stupidly. One of the main things we’re tracking this week is the number of people traveling in the US. Thursday is Thanksgiving Day, a national holiday and usually the busiest time for travel in the US as people gather for traditional meals together. News reports say that many people – far too many, IMHO – are going to hold such meals with their friends and extended families this year as usual.

The Citimapper data, which shows how many people planned trips relative to the reference month, is current up to 22 November. It didn’t show any increase at all in trips. 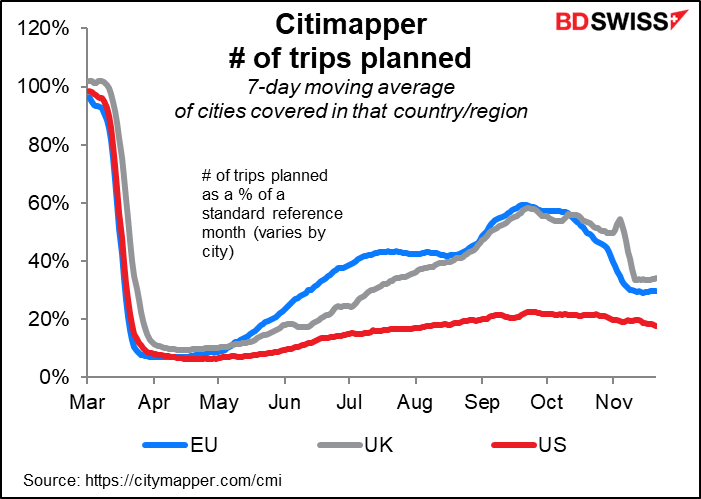 Nor does there seem to be any great increase in the number of people flying, although it’s still early days – the data is only up to 21 November (Saturday). We’ll be watching this data carefully this week as a harbinger of possible disaster later on. 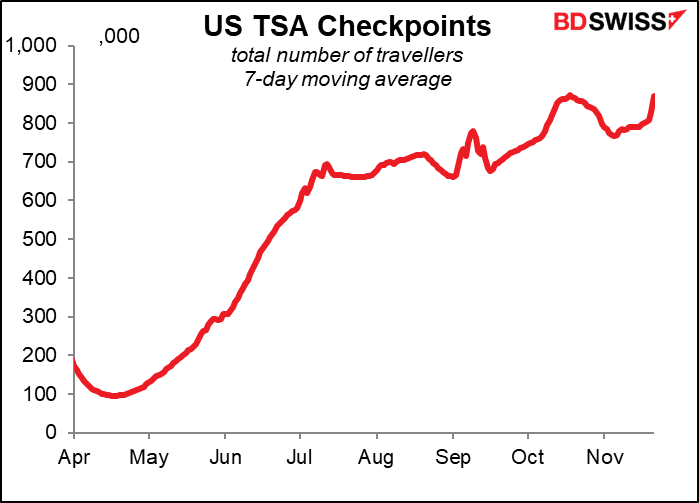 With the virus exploding in the US and hospitals overflowing, state governments have started to take more stringent measures to control the spread. Los Angeles even banned outdoor eating, for example.

That contrasts with Europe, where cases are stabilizing and governments are starting to relax their lighter lockdowns. The UK reportedly will announce today that quarantine restrictions will ease in time for Christmas so that families can visit relatives abroad. The French government is planning a three-phase reduction in lockdown measures in December, while Italy is considering allowing shops to open for longer in the run-up to Christmas.

The difference in the relative spread of the virus may change market expectations for the relative growth of the Eurozone and the US. That could push EUR/USD higher.

Elsewhere, the big news was a report in the conservative-leaning UK newspaper The Telegraph, which said “Boris Johnson prepares significant Brexit intervention as negotiators begin the ‘final push.’ “The PM is expected to attempt to clear away the final barriers to a deal – both sides believe one is now within reach.” This report has pushed the pound up this morning.

At the same time though, demand for insurance against a near-term fall in the pound seems to be increasing. Perhaps some market participants don’t trust the PM – an entirely reasonable position. 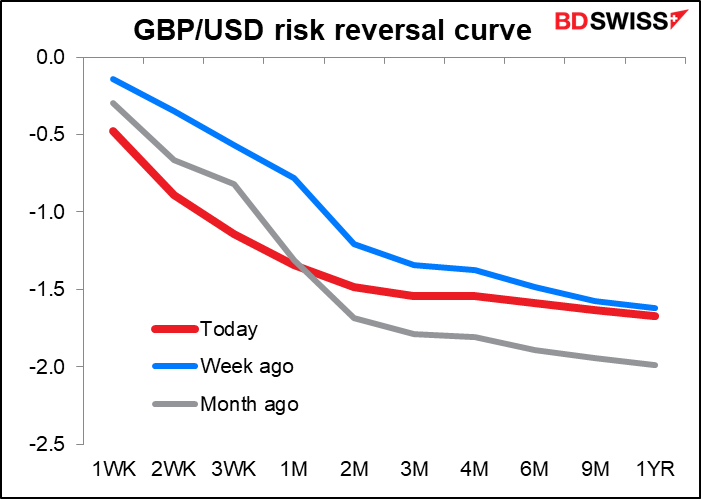 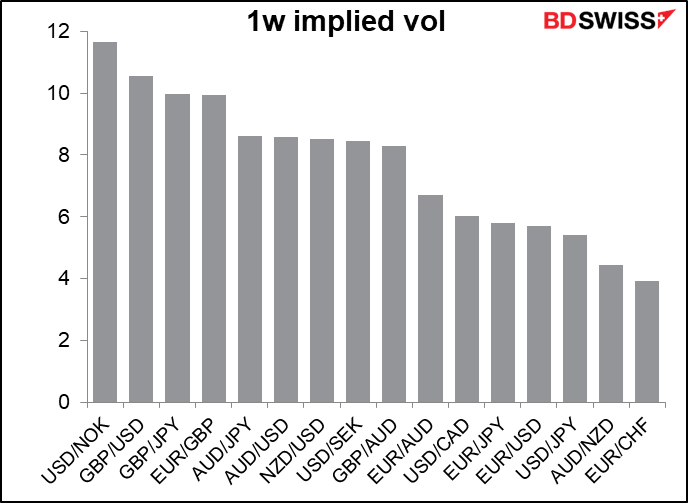 EUR/GBP and GBP/USD were the only currency pairs whose implied vol rose over the last week, i.e. the only two pairs that the market expects will be more volatile. This is natural as we come down to the wire in the Brexit negotiations. Which makes me think of another fish pun:  it’s time for Johnson to fish or cut bait (for those who aren’t native speakers of English, that’s an idiom that means “to stop vacillating and decide to act on or disengage from something.”) 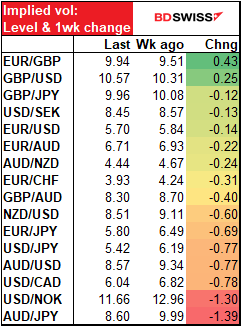 The only thing on the schedule today is (are?) the preliminary purchasing managers’ indices (PMIs) for the major industrial countries. They’re expected to be bad; all of them that we have forecasts for are expected to be lower, particularly the UK. That was the experience of Japan, whose figures came out Friday as they are on holiday Monday.

UK services are forecast to fall back below the 50 “boom or bust” line, which is particularly disappointing. The US is also expected to fall, but nowhere near as much as the Eurozone. Furthermore the US service-sector PMI is expected to remain so far above 50 that it could prove a positive for the dollar. 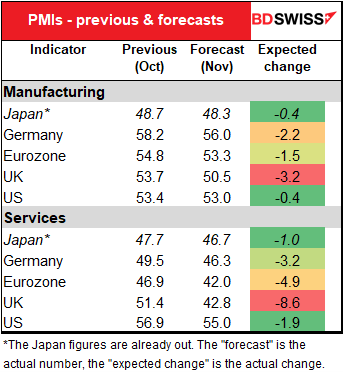 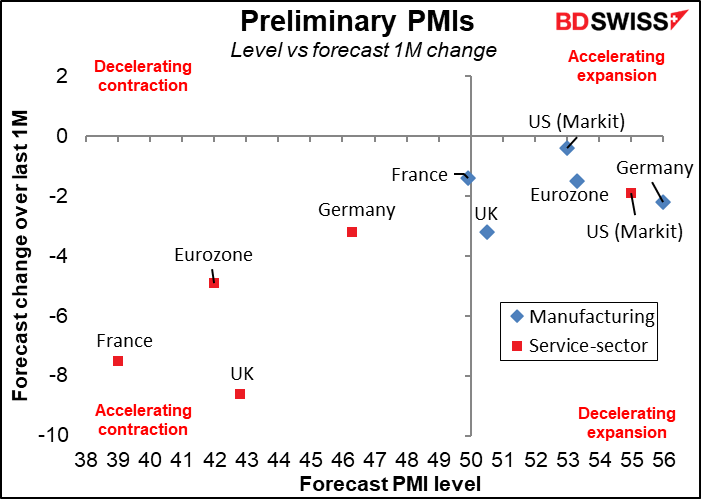 We don’t have a good idea of how these changes will impact currencies. Until the pandemic struck, market attention focused on the manufacturing PMIs, which were more representative of the business cycle. Currencies pairs often followed (roughly) the relative manufacturing PMIs of the two countries involved. 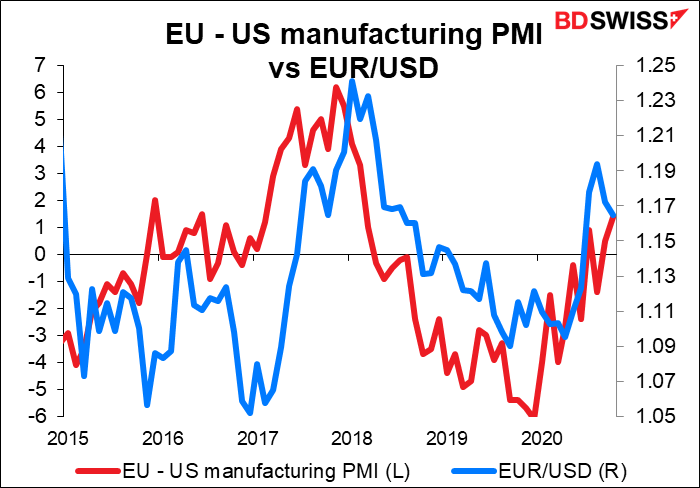 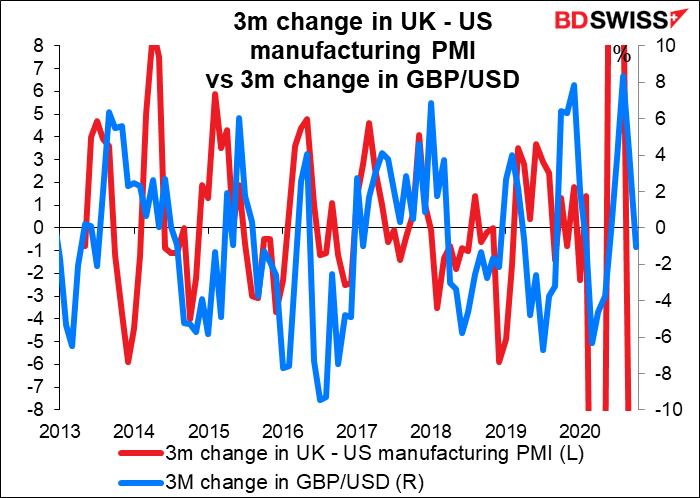 However as the graph of the preliminary PMIs shows, the manufacturing PMIs aren’t diverging that much this time around – the big difference is in the service-sector PMIs. Insofar as they are the new marker for the business cycle in each country, currencies could follow the difference there, just as they used to follow the difference in manufacturing PMIs. On the other hand, one could also make a case that the service-sector PMIs are a reverse leading indicator of future growth – that is, shutting down the service-sector now could lead to getting the virus under control in the future and would therefore be a positive for the currency.

The only other indicator on the schedule for today is the Chicago Fed National Activity Index (CFNAI). The CFNAI is different from the indices that the other regional Fed banks announce. Those gauge conditions in that particular Fed district, while the CFNAI gauges overall economic activity and related inflationary pressure nationally. A positive number corresponds to growth above trend and a negative number, below trend. Although the components have all been previously announced, the indicator is still closely watched. However it’s difficult to interpret any one month’s number because the series is so volatile. This month it’s forecast to be unchanged from the previous month, which would indicate a plateau in the rate of growth. 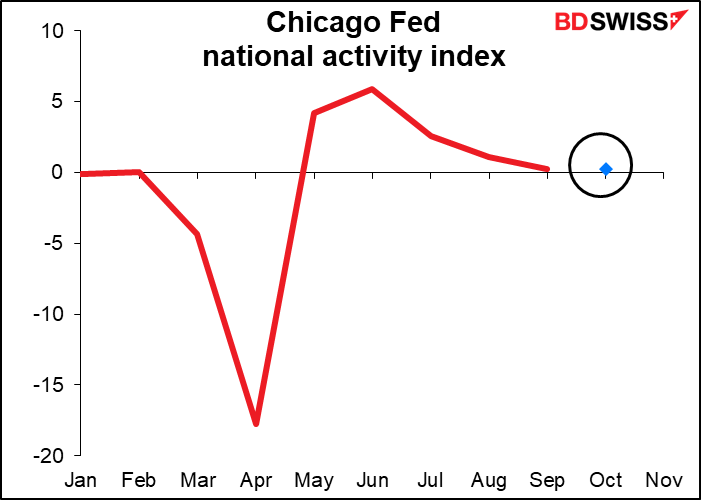 Early tomorrow morning we get the revised German GDP figure, but that’s rarely revised – it would be more accurate to say we get the details of the composition of German GDP. 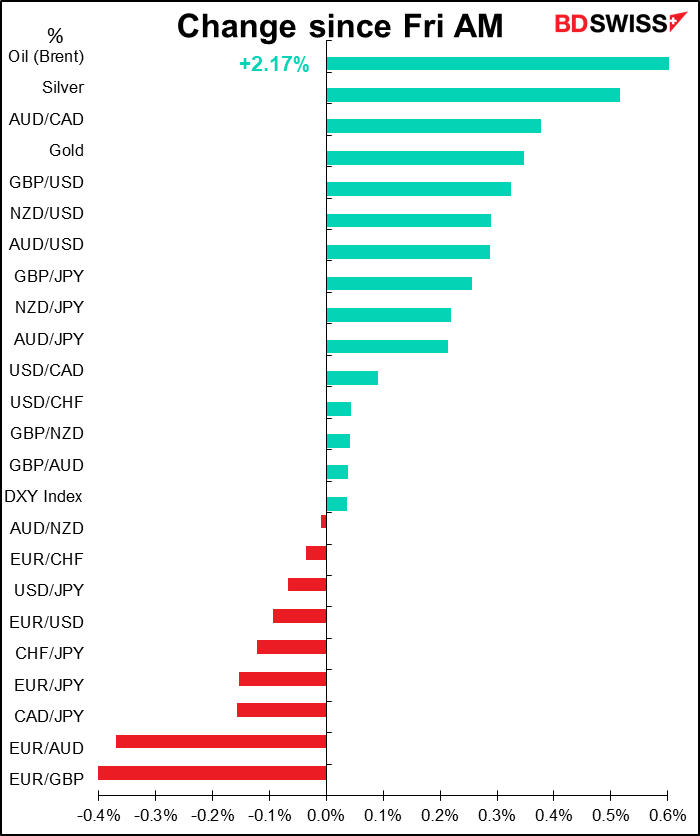