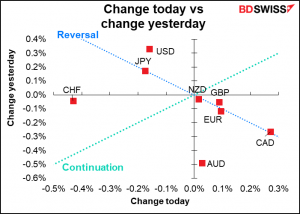 Yesterday started off with a “risk-off” mood in Asia, but sentiment recovered during the day as market participants focused on monetary policy and global politics rather than the worsening pandemic. Most European bourses ended higher, as did the S&P 500 (+0.23%), although the NASDAQ closed down slightly (-0.07%). This morning Asian stocks are mixed.

Despite the supposed worries about the delta variant and indeed the worsening virus situation in many countries, stock markets seem to be taking a pretty optimistic view of things. The MSCI World Hotels, Restaurants, and Leisure index – a proxy for reopening stocks – has outperformed the Citi Global Stay-At-Home index since late July. (Citi apparently also has a “leave home” index, but it’s not available on Bloomberg.) 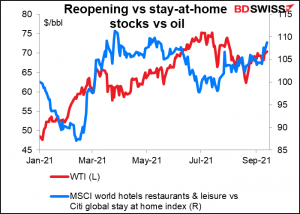 Oil was the big mover of the day, Part of that is enthusiasm about reopening and part is fear about hurricanes. Yet another one, Nicholas, made landfall in Texas, threatening flooding in Louisiana and Mississippi even before production has yet to be fully restored more than two weeks after Hurricane Ida.

The rally in CAD, the day’s best-performing currency, is easy enough to explain as a function of the rally in oil. 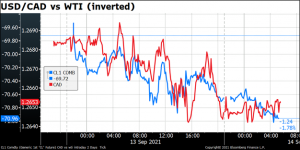 As for CHF, the day’s worst performer, that was more of a mystery. There was no obvious reason for the move. EUR/CHF has been sensitive to movements in European rates, but there was no big movement there yesterday, although in general Swiss bonds have become a bit less attractive relative to German Bunds over the last week. 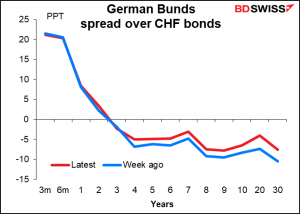 It could be due to the recent outperformance of European stocks vs Swiss stocks. 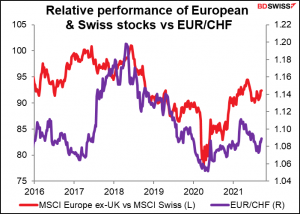 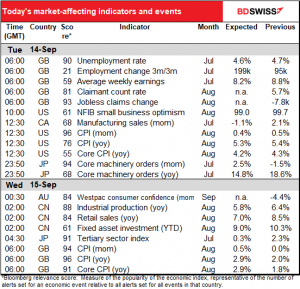 Next up is the highlight of the week insofar as indicators are concerned, the US consumer price index (CPI). The CPI isn’t the inflation gauge that the Fed targets –that’s the personal consumption expenditure (PCE) deflator, or more accurately, the core PCE deflator – but the market pays more attention to the CPI than to the PCE deflators (the headline CPI mom change has a stellar Bloomberg relevance index of 96.1 and the core index 76.9, whereas the highest-ranked PCE deflator is the mom PCE core deflator with a measly 60.1 followed by the headline with a ridiculous 18.9) That could be because people understand the CPI better than they understand the PCE deflators, or maybe it’s just because the CPI comes out two weeks or so before the PCE deflators and they’re pretty well correlated, so the former is a good early proxy for the latter (although the CPI is more volatile than the PCE deflator). 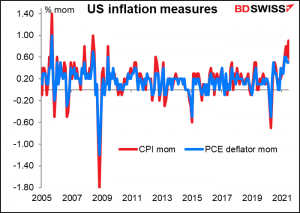 This month, the US inflation is expected to be little changed. Both the headline and core yoy inflation rates are forecast to slow by a mere 0.10 percentage point. Will that slowing reassure people that the Fed’s “transitory” theory is correct? Or will the slow pace of the decline make people wonder just how long something can last and still be considered “transitory?” Added to the indications that growth is slowing in the face of the worsening pandemic, some people are starting to fear that the US may be facing a period of stagflation – a word that hasn’t been heard on Wall Street since the 1970s. 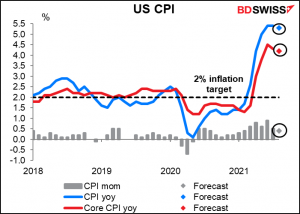 Overnight Japan releases its core machinery orders (private sector orders excluding ships and electric power company orders). Orders have been trending lower recently as demand from non-manufacturers remains weak (see the bit below on the tertiary sector index). The slowdown in China and other overseas economies may also weigh on orders. Still, the consensus forecast of a +2.8% mom increase would be enough to boost the six-month moving average just barely into positive territory. 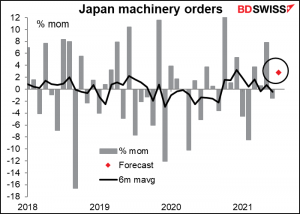 As mentioned above, Japan’s long-suffering tertiary sector (aka service sector) has been in the doldrums since the pandemic began. It’s expected to be barely changed during the latest month, which would work out to a 4.1% decline since before the pandemic began. 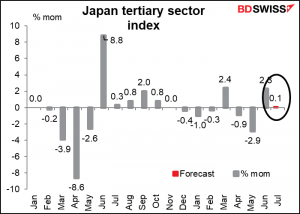 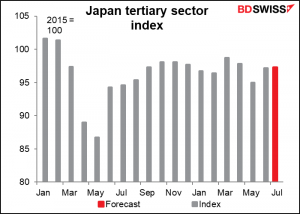 China announces its monthly triumvirate of retail sales, industrial production, and fixed asset investment. They’re not so informative nowadays because they’re only available on a yoy basis and the yoy changes are distorted by what was going on a year ago. 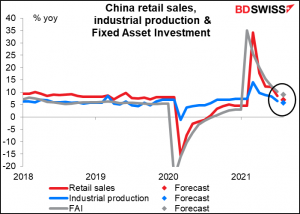 Nonetheless, the continued slowdown across all three indicators does suggest a general slowdown in the Chinese economy as the country puts on restrictions to curb the virus outbreak. 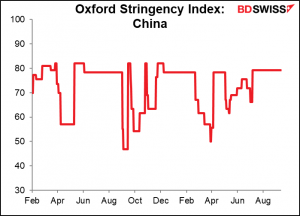 That’s also the signal we’re getting from the purchasing managers’ indices, at least those from Caixin/Markit (which tend to survey more of the smaller private companies on the coast, rather than the larger state-owned companies). This could be negative for AUD. 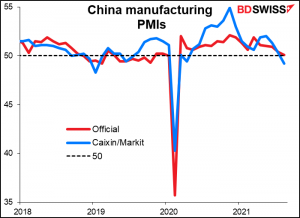 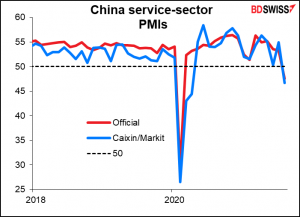 Yet another early-morning UK indicator: Britain’s CPI. The annual headline rate of inflation is expected to jump by 0.9 percentage points, while the core rate is forecast to leap an even higher 1.1 ppt – both to 2.9%, oddly enough. However that’s due in a large part to base effects, as prices rose by only +0.2% mom in August 2020 thanks to the “Eat Out to Help Out” scheme implemented then, which subsidized the cost of restaurant meals. If we look at the mom rate of change, it’s expected to be +0.5%, which is not particularly high for Britain.

The question is, what will the market focus on? I think market participants are likely to see the leap in inflation and think “BoE tightening,” which would be positive for GBP. Never mind that the Bank said last month that “The Committee’s central expectation is that current elevated global and domestic cost pressures will prove transitory” and that “CPI inflation is projected to rise temporarily in the near term, to 4% in 2021 Q4, owing largely to developments in energy and other goods prices, before falling back to close to the 2% target.” 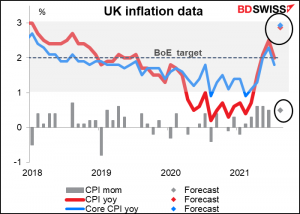 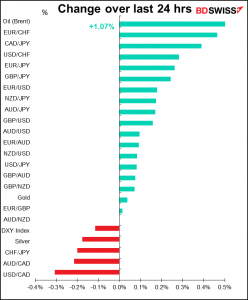