It was a generally “risk-off” day yesterday, with US stocks closing lower. The mood has carried on into Asia this morning, where most markets are down as well, although at the time of writing, the S&P 500 is indicated opening about unchanged.

The source of the trouble was the US consumer price index (CPI), oddly enough. I say “oddly” because the headline figure was less worrisome than the market had expected. The core figure especially so – up just 0.1% mom, vs the average +0.7% mom rise for the last four months.

This was the first US CPI to come out below expectations since last November. 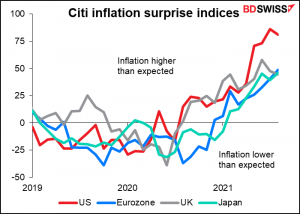 In theory below-expectations inflation should’ve triggered a “risk-on” environment as it shows some cooling of inflationary pressures and therefore gives the Fed less reason to start tapering down its aid to the economy.

The downside surprise stemmed largely from several areas that have been strongly impacted by the pandemic, such as airfares, which fell 9.1% mom, and used car prices, which were down 1.5% mom (despite a 1.2% mom increase in new car prices). Those declines suggest that the inflationary impact of the pandemic is starting to wane and confirming the Fed’s “transitory” mantra. 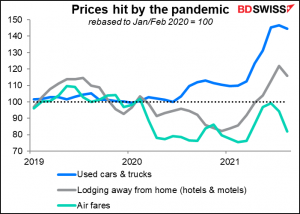 However, the market was disturbed by a further increase in housing prices, which suggests some basis for a continued high rate of inflation in the future. 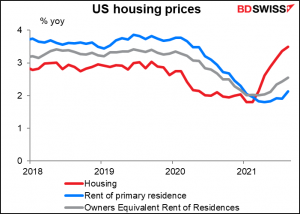 Another curious point was that although the stock market seemed concerned by the figures, the bond market wasn’t. US Treasury 10-year yields fell -4.8 bps to 1.284% as 10-year breakeven inflation rate fell -3.7 bps. Meanwhile though commodity prices continue to soar. The Bloomberg spot commodity index is at its highest in a decade (since April 2011). This may presage higher inflation to come, too. Or certainly higher input prices for companies (which may partly explain the different movement of the stock market vs the bond market). 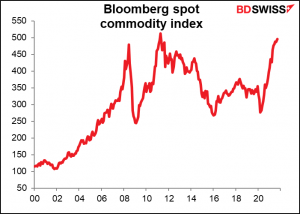 Especially natural gas, which has been soaring recently. This has a huge impact on consumers in Europe in particular, also it will feed through the economy via higher electricity prices. 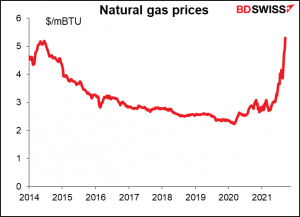 That’s about the only reason why I can see we got a typical “risk-off” mood in the FX market yesterday, with the safe-haven JPY and CHF moving higher and the commodity currencies moving lower– even though commodities themselves moved higher.

For today, I would expect some mean reversion – I think the headline of the US CPI is more significant and people are likely to focus on that and go back to the usual “buy the dip” philosophy. We already had the UK consumer price index (CPI) this morning. Contrary to the US experience, UK inflation was higher than expected across the board. That could be positive for GBP today. However as I mentioned yesterday, the Bank of England expects inflation to hit 4% in Q4 so this won’t be too much of a concern to them. On today’s forecast, it’s expected to be -0.9% below the pre-pandemic level. 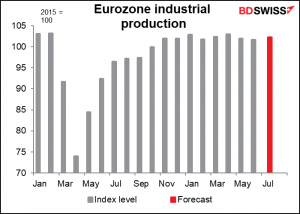 This is about par for the course.US IP is -0.1% below pre-pandemic levels, but Japan is -0.8% and the UK is -2.0%, so the Eurozone isn’t doing that much worse than anyone else. I therefore think that this number would be neutral for EUR. The Empire State manufacturing survey is expected to be little changed from last month – as is Thursday’s Philadelphia Fed survey. In fact they’re both expected to be almost the same. This would indicate continued steady expansion in the US, which I would think would be positive for USD. Canada’s CPI is forecast to move higher. The country is suffering from the same supply train constraints as other countries, plus rising gasoline prices. 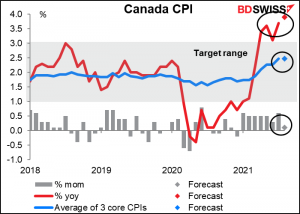 The market consensus forecast of 3.9% would be the highest inflation rate since 4.2% in March 2003. Yet the three core measures are expected to remain unchanged on average. That’s likely to convince the Bank of Canada that higher inflation is only “transitory” and that they can continue with their dovish stance. 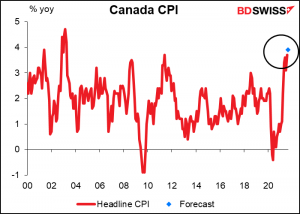 Really, this should be negative for CAD in that it means lower real interest rates, but I suspect people will just look at the higher inflation in contrast to yesterday’s slower US inflation and think “tightening,” which would be positive for CAD (i.e. negative for USD/CAD). And in any case, real interest rate differentials don’t seem to be that big of a driver of USD/CAD, and even nominal rate differentials seem to be less of a factor than they were a few years ago. 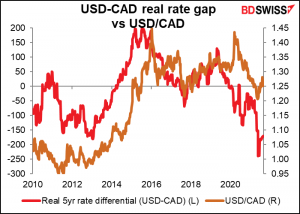 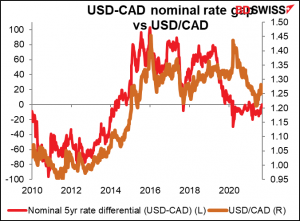 This got me thinking: do interest rates move USD/CAD or is it just oil? There seems to be a break in the series around 2018. So I ran two different regression analyses, one from 2010-2017 and another from 2018 until now. The variables I used were the nominal two-year yield gap, the real two-year yield gap, the price of Western Select (Canada’s benchmark oil) and West Texas Intermediate (the US benchmark oil).

For 2010-2018, the nominal rate gap was the overwhelmingly significant variable (T-stat 17.6) followed by the real rate gap (5.2). Neither oil price was statistically significant.

You can see how badly the first regression fits after 2017 and how badly the second one fits before then. Clearly, CAD is being traded more as a petrocurrency than as a domestic currency. 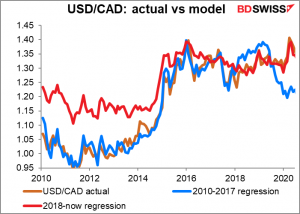 US industrial production is a closely watched indicator in the stock market but not so important for the FX market. Production is expected to be up a bit, as one might expect with the manufacturing purchasing managers’ index at a pretty strong 59.5. It would probably be up even more except for supply chain disruptions and parts shortages. Septembers’ figure for example will be held back by production halts at some auto plants due to the lack of necessary chips. 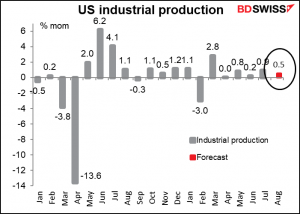 Overnight, New Zealand is the last of the G10 countries to announce its Q2 GDP, as far as I know. It’s supposed to be up a robust 1.1% qoq. That would be above the 0.7% qoq guidance from the Reserve Bank of New Zealand (RBNZ) in the August Monetary Policy Statement.

However, this indicator is always out-of-date by the time it’s published and even more so this time, given that the country went into lockdown mid-August. Under those conditions, Q2 GDP can tell us little about what Q3 GDP might be. The market is forecasting +0.7% qoq growth in Q3, although of course that forecast is subject to change without notice. 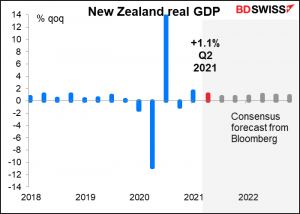 But with the virus pretty much under control again, the RBNZ probably doesn’t have to worry about the long-term effects of the lockdown. 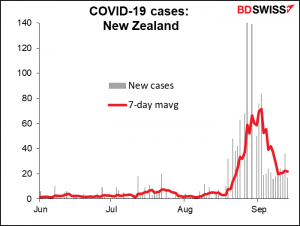 In fact the market is already discounting a 25-bps hike at the RBNZ’s next meeting on Oct. 6th. 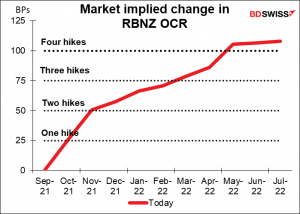 Finally, Australia announces its employment data. This is important, because the Reserve Bank of Australia (RBA) last week once again said after its meeting that it would ”continue to review the bond purchase program in light of economic conditions and the health situation, and their implications for the expected progress towards full employment and the inflation target.”
Thanks to the lockdowns, the number of jobs is expected to fall while the unemployment rate is expected to rise. The problem will be how to extract the signal from the noise, given that the survey week captured some lockdowns but not others. Nonetheless, the fall in jobs and rise in the unemployment rate could tempt the RBA to make further adjustments to their bond purchase program as they did last week, with similar effect, i.e. weakening AUD. Or it could at least raise expectations among market participants that this could happen. 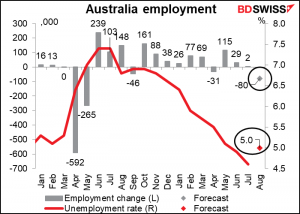 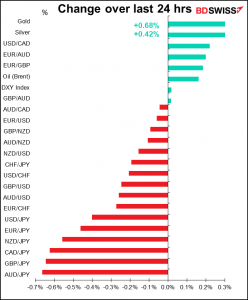