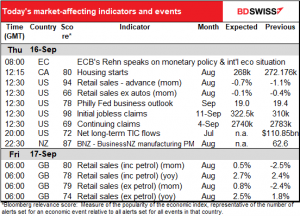 Lots on the schedule today!

US retail sales are a biggie every month, seeing as personal consumption accounts for some two-thirds of the US economy (not everything the US consumes is considered retail sales, but it’s a pretty good proxy). 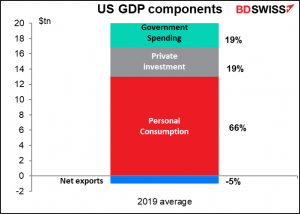 Retail sales overall are expected to be down slightly this month. The fall at the headline level is partly attributable to a shortage of cars to sell – motor vehicle sales were down about 11% mom during August, not because of a lack of demand but rather because auto makers can’t get enough semiconductor chips to meet demand. 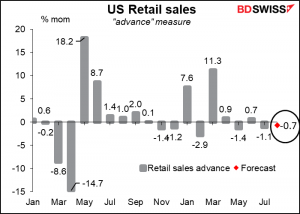 It’s not all autos though. Even excluding autos and petrol station sales, retail sales are expected to be down slightly anyway. 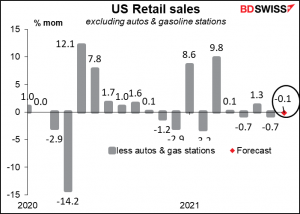 I’m not sure whether this decline is significant, though. Even if sales do fall 0.7% mom, they’ll still be 16.5% higher than they were in January/February. It’s to be expected that as the extraordinary Federal unemployment benefits end and the stimulus payments are all used up, sales should fall back to more normal levels. The impact of that decline in spending on the US economy is one of the key concerns for the markets. 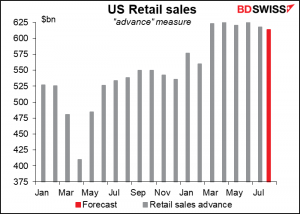 The Philadelphia Fed business sentiment index is expected to be little changed. So was the Empire State index on Tuesday, and that turned out to be much better than expected – it leaped to 34.3 from 18.3 vs expectations of a slight decline to 17.9. 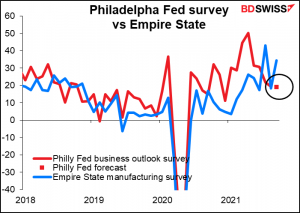 Next up is the dreaded US jobless claims.

Initial claims are expected to be up a bit (+13k). This is probably due in part to the hurricanes in the Gulf of Mexico and part due to the auto plant shutdowns — General Motors for example said it will idle nearly all its assembly plants in North America for two weeks as the pandemic has caused a shortage of semiconductor chips. This week is the week for the monthly employment report survey and so a rise in claims would be particularly bad. 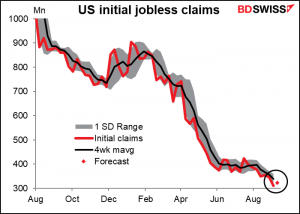 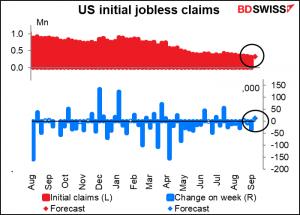 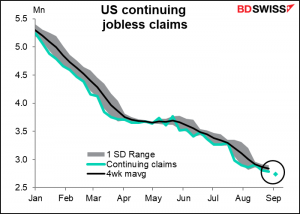 Then…speaking of retail sales…Britain announces its retail sales at the break of dawn Friday. A modest increase is expected after the 2.5% mom decline in July. 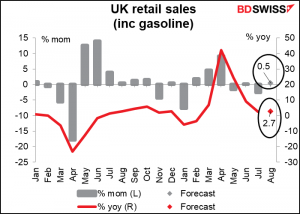 Assuming the figure comes in as forecast, UK retail sales would be 6.0% above their pre-pandemic level, which is pretty good. Not as good as the US, but in line with Germany and much better than Japan. I think these figures could be positive for the pound. 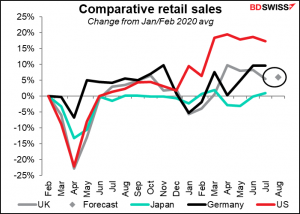 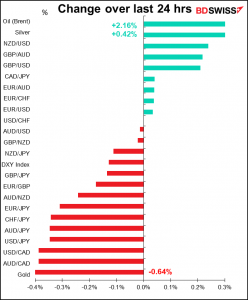