USD Unfazed by Weak NFP, CAD Up, JPY Down; UK Employment (Tomorrow AM) 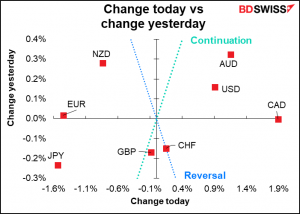 CAD was the star of the show after Canadian employment leapt by 157k, more than double the 60k that was expected. The unemployment rate fell to 6.9%, exactly as expected. (The 1.8% rise in the price of West Texas Intermediate (WTI), the US benchmark crude oil, didn’t hurt either.) 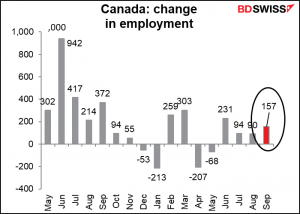 The sharp rise in jobs means that Canada has joined the small group of G10 countries that have now recovered all of the jobs lost during the pandemic. 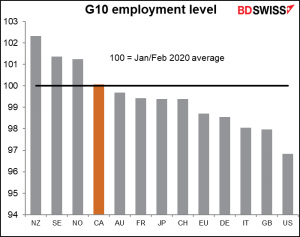 JPY on the other hand crumbled. It’s getting hit from two sides. On the one hand, global bond yields moved higher after the NFP figure and so the rate gap between Japanese government bonds (JGBs) and all other markets widened. 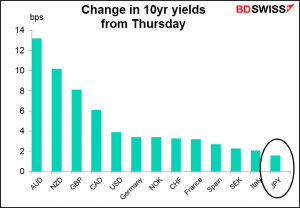 Japanese investors can buy almost any major country’s bonds and hedge the returns back into yen and still earn a pick-up over buying JGBs. That should encourage capital outflows in a “risk-on” environment. 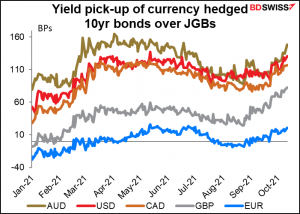 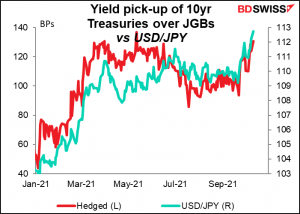 Secondly, Japan is going to be particularly hard-hit by the rise in energy costs as the country has to import almost all its energy (luckily most of its liquefied natural gas is on long-term contract, but that will be creeping up gradually regardless).

GBP was little changed from this time Friday morning, but that masks a big turnaround following the NFP figure. GBP also got a boost this morning after Bank of England officials were quoted in the press over the weekend warning of fire and brimstone, or at least earlier-than-expected rate hikes. BoE Gov. Baily warned of a potentially “very damaging” period of inflation unless policy-makers take action. He told the Yorkshire Post that “we have got to in a sense prevent the thing (higher inflation) becoming permanently embedded because that would obviously be very damaging.” Meanwhile, external member Michael Saunders, one of the most hawkish members of the Monetary Policy Committee (MPC), said investors were right to bring forward the timing of rate hikes. I think they’re heading into one of the Mothers of All Policy Errors, but then again I haven’t been appointed to the MPC yet, have I? GBP+ 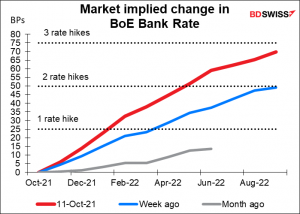 Friday’s US nonfarm payrolls were disappointing pretty much across the board. In particular, the growth in payrolls was disappointing for the second month in a row. The three-month moving average of private payroll growth has now fallen to 488k from a peak of 726k in July.

Though disappointing, the figure probably won’t dissuade the Fed from beginning to taper down its $120bn-a-month bond purchases in November or December. Fed Chair Powell was asked at his Sep. 22nd press conference what he’d need to see from the September figure and he said, “…for me, it wouldn’t take a knockout, great, super strong employment report. It would take a reasonably good employment report for me to feel like that test is met…many on the Committee feel that the test is already met. Others want to see more progress….” In that respect, I think the figure was “not good, but good enough.”

The data are still distorted by the pandemic. A good portion of the miss was in education, which lost 180k jobs on a seasonally adjusted basis (note the decline in government jobs). That means more teachers usually return to work in September than did this year, so it registers as a decline. That may be due to some schools still being closed due to COVID-19, or some teachers refusing to go back to work. 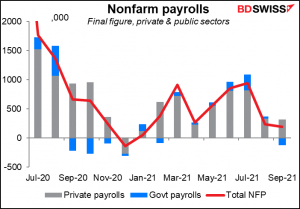 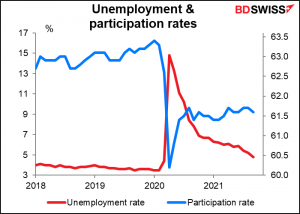 The fall in the participation rate was particularly disturbing because everyone had been expecting an increase in people willing to work as schools reopened and Federal supplemental unemployment benefits expired. Instead it appears that some 183k people dropped out of the labor force (more than 300k women over the age of 20) and there was even a 100k fall in the number of people saying they are out of the labor force but currently want a job. 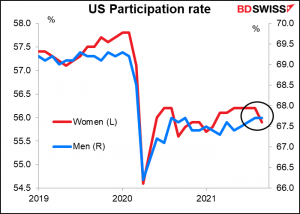 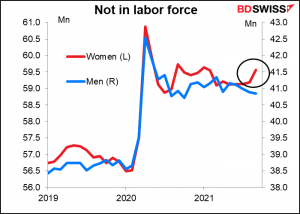 But there’s another way of looking at the data. The decline in participation suggests that the sluggish rate of growth in payrolls might not be due to lack of demand but rather lack of supply. People just don’t want to work as much as they did before (watch tomorrow’s Job Offers and Labor Turnover Survey for more details). Indeed, a recent research note by the Dallas Fed said that “the labor market slack created by the COVID-19 pandemic has been absorbed. This improvement extends to women as well as specific population subgroups, including Asians, Blacks and Hispanics.” If that’s the case, then the signal that the Fed is getting from this data differs from the traditional interpretation. Perhaps we need a new way to look at some of these indicators in the COVID-19 world.

A resounding vote for the dollar! Specs increased their long USD position once again. They increased it outright by adding to their long DXY position, by flipping to short GBP and EUR, and by adding to their short positions in other currencies (except JPY, which they cut by a tiny 2%). In fact specs are now short every other currency except NZD, and even there they cut their longs a bit. (I admit they’re long RUB and ZAR but I don’t follow those currencies as they’re not of interest to most retail traders.) 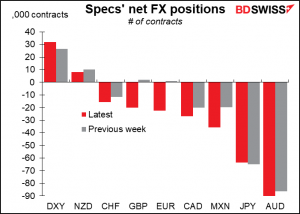 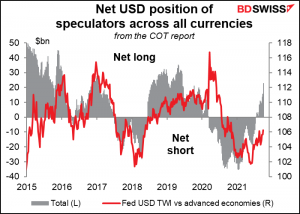 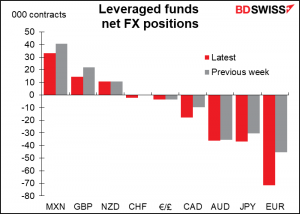 Retail investors on the other hand increased their long EUR positions a bit as well as their long CAD and long DXY. At the same time they increased their short JPY and short AUD a bit, too. There’s a big difference of opinion on EUR between retail and professionals. 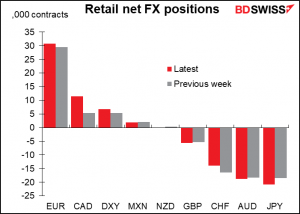 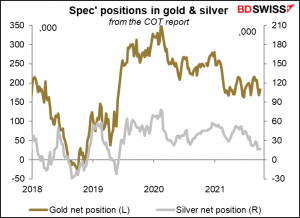 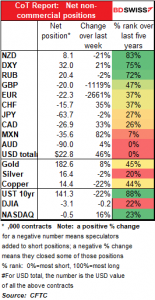 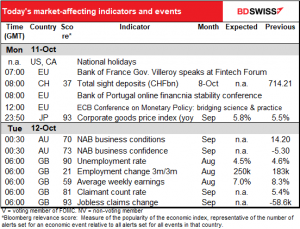 Today is likely to be pretty calm in the afternoon as it’s a holiday in both the US (Columbus Day) and Canada (Thanksgiving).

In fact, it’s worse than that – it’s likely to be pretty calm in the morning too because there’s nothing major on in Europe either except for a number of conferences that are not likely to produce anything market-moving for the FX market.

The Bank of Portugal is having an online conference on financial stability with a couple of European Central Bank (ECB) bigwigs and former Bank of England Gov. Carney, while the ECB starts a two-day conference on “Monetary Policy: Bridging Science and Practice,” although I think they’re being rather optimistic to talk about “science” in the context of central banking. Looking at the agenda I don’t think there’s anything we need to worry about, although some of the papers could shed light on how central banks plan on dealing with the problem of high inflation at a time of slowing growth. The annual IMF/World Bank meeting starts up today but there isn’t much exciting on the schedule today. You can see the schedule for the whole week here.

The only indicator is the weekly Swiss sight deposits, which are totally boring nowadays. Deposits have fallen for three weeks in a row even though EUR/CHF has been falling steadily. What ever happened to the Swiss National Bank “…remains willing to intervene in the foreign exchange market as necessary, in order to counter upward pressure on the Swiss franc”? 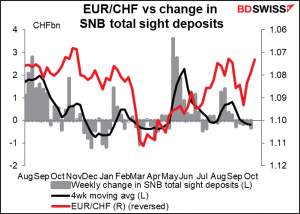 Overnight, Japan’s corporate goods price index (aka producer prices in most other countries) has a high Bloomberg relevance score but it’s probably more relevant for equity traders than FX. Note that this index is expected to be up 5.8% yoy while the consumer price index in Japan is actually falling 0.4% yoy. That’s why this indicator is important for equity traders – it shows how companies’ margins are getting squeezed. 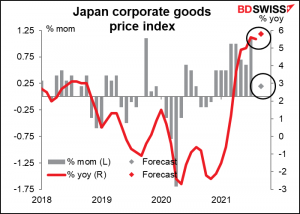 So then we can wait until it’s the next morning and it’s London Calling with the UK employment data. They’re expected to be brilliant – the biggest rise in the number of people working since Nov. 2015 and a further fall in the unemployment rate. 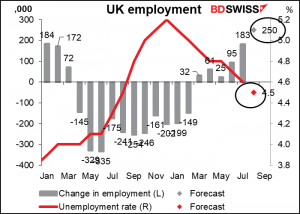 Growth in average weekly earnings is expected to slow markedly on a yoy basis thanks to base and compositional effects. But it’s expected to remain above the rate of inflation, which is a threat to the Bank of England. Heaven forbid that workers should earn more! That could be disastrous! They said so themselves: “The Committee will be monitoring closely the incoming evidence regarding developments in the labour market, and particularly unemployment, wider measures of slack and underlying pay pressures; the extent to which businesses pass on wage and other cost increases…”

I think an improving labor (sorry, labour) market will add to the Bank of England’s conviction that “some modest tightening of monetary policy” may be necessary and should therefore be positive for sterling. 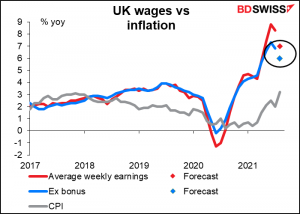 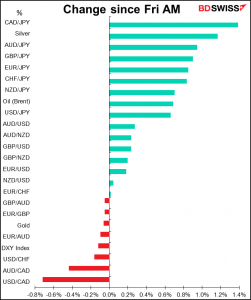