I had my weekly all written this morning, but obviously it got blown out of the water by the news about Trump getting the virus. Please see my “Market Insight” piece for my views on that issue. In short, I think the immediate uncertainty makes it a huge “risk-off” event that’s positive for the dollar, but if it results in Vice President Pence contesting the election against Biden – two men who are both acceptable to the markets – it could turn into just as big a “risk-on” event that’s negative for the dollar. Before then though we’re going to go through a lot of uncertainty and confusion. That’s never good for markets – although it is good for volatility.

The second week of the month normally has few important indicators. This month it doesn’t even have the one that does usually fall in the second week, the US consumer price index, which this month comes out on October 13th.

The main point of interest was going to be the Vice President “debate” on Wednesday. VP Pence will “debate” Biden’s running mate, Senator Kamala Harris. I’m not sure though that’s going to take place now – at the time of writing I couldn’t find out any information about it.

If it does, I suspect the roles we saw played out on Tuesday will be reversed, as the nugatory Pence meets with the aggressive Harris, a former district attorney and prosecutor. Here’s a medley of her greatest hits from the Democratic debates – she’s much more assertive than Biden. You can see her go after VP Biden himself about his record on busing.

Then there’s a Reserve Bank of Australia (RBA) meeting on Tuesday. With 11 meetings a year, there’s a 21% chance of an RBA meeting any week of the year (slightly more if you consider that they wouldn’t meet the last week of the year). The Australia futures are predicting no more changes in rates this year, and the market consensus for this meeting is no change (20 out of the 24 economists polled on Bloomberg). 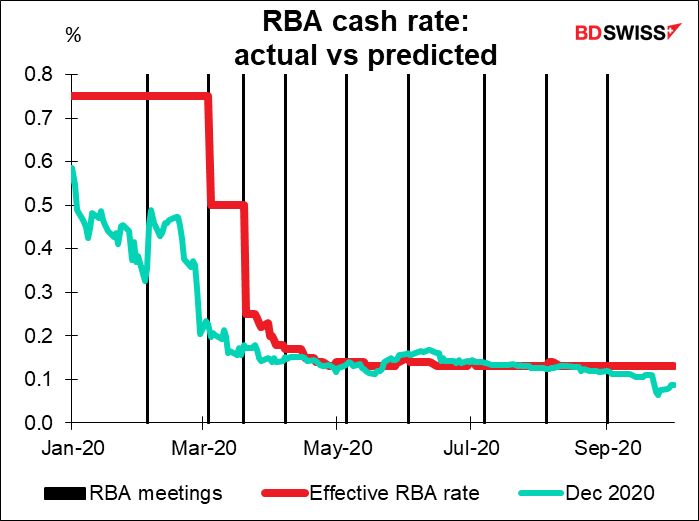 In a speech in July, RBA Gov. Lowe noted that “Using international experience as a guide, it would have been possible to configure the existing elements of the RBA package differently.” “For example, the various interest rates currently at 25 basis points could have been set lower, at say 10 basis points.” They could have also introduced more or different bond purchases and changed the details of their Term Funding Facility. “After discussing these possibilities, the Board concluded that there was no need to adjust our package of measures in the current environment. The Board has, however, not ruled out future changes to the configuration of this package if developments in Australia and overseas warrant doing so,” he said.

Deputy Gov. Debelle referred to that speech in his speech two weeks ago, “The Australian Economy and Monetary Policy.” “Given the outlook for inflation and employment is not consistent with the Bank’s objectives over the period ahead, the Board continues to assess other policy options,” he said. “The Governor talked about these options…in July.” He then gives a rather exhaustive list of how the RBA could loosen policy further, and concludes, “As the outlook for the Australian economy unfolds, the Board will continue to assess the merits of the range of monetary options to best support the economic recovery.”

It’s not beyond the realm of possibility that this speech was a hint that something’s coming. I see an asymmetric risk here. If the RBA does nothing, that will probably surprise no one and the AUD will probably be little changed. But if they do loosen another notch, AUD will probably gap lower. Thus the risk/reward on a short AUD/USD or short AUD/NZD position might be attractive.

As for the indicators, this is one week that the US takes a back seat.

Germany releases its factory orders on Tuesday and industrial production on Wednesday. Factory orders are coming back; they’re expected to be 6.9% below the (rather high) level of January and February. 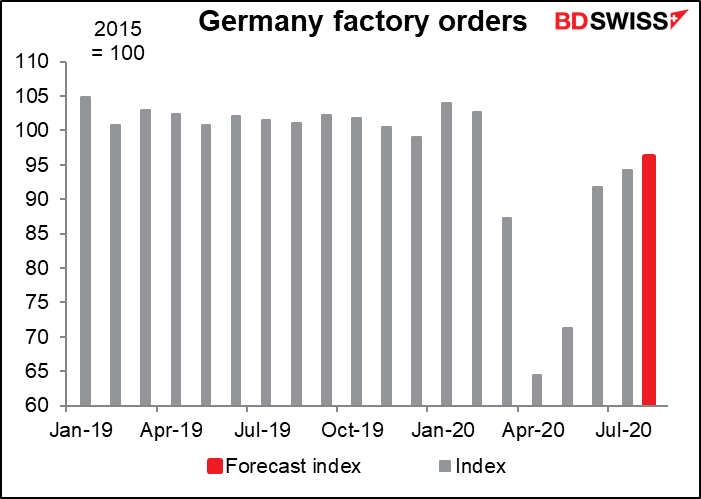 But industrial production is still lagging. It’s seen remaining 9.7% below the pre-pandemic level, and hitting a plateau (the market expects only a 1.0% mom increase, following a similarly small 1.2% mom rise the previous month). 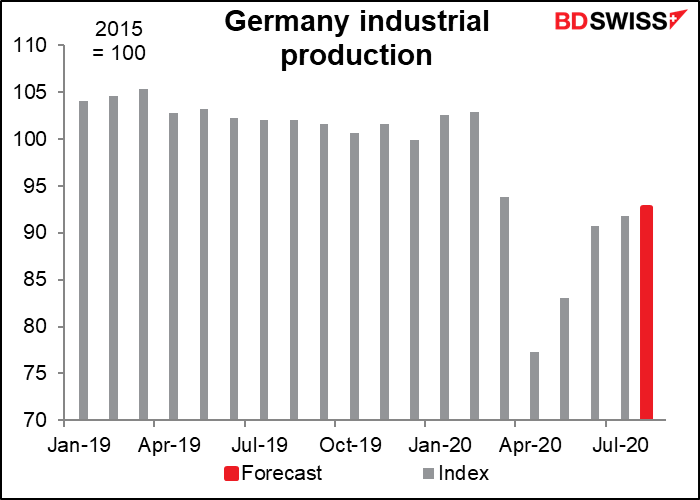 I think the market forecast of a 5.0% mom rise in GDP would be disappointing. In a recent speech, Avoiding Economic Anxiety, Bank of England Chief Economist Andy Haldane said that “Having fallen precipitously by 20% in the second quarter, we expect UK GDP to have risen by a vertiginous 20% in the third quarter – by some margin its largest-ever rise.” But he also said that “The pace of recovery has varied, starting slowly in May, picking up pace rapidly during June and July and is then expected to have slowed a little during August and September.” Unfortunately, if August GDP is up 5.0% mom and Q3 is to rise by 20% qoq, then September would have to rise by 7.2% mom – not likely, from what he said. So I think this result would be disappointing to the Bank of England and make further stimulus likely – GBP-negative. 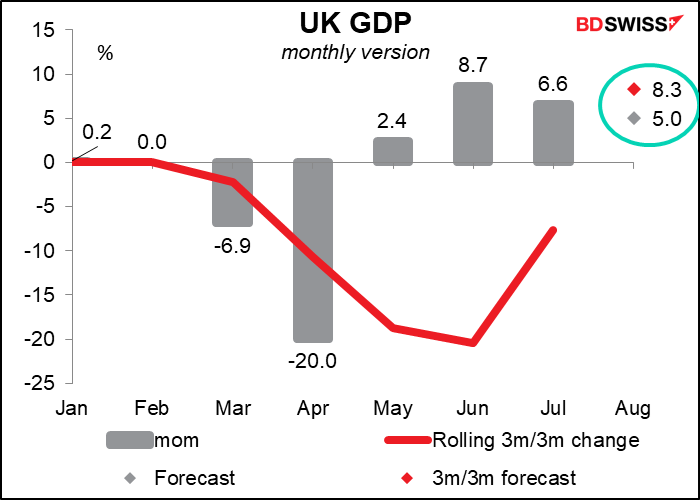 In addition to the indicators, there are a lot of speeches during the coming week, including two appearances by ECB President Lagarde (Tuesday and Wednesday) and an address by Fed Chair Powell to the National Association for Business Economics (NABE) conference. ECB on Tuesday. ECB Chief Economist Lane will also address that group. We also have Bank of England Gov. Bailey in a panel discussion with ECB member Schnabel on Thursday, the ECB minutes, plus a speech by Swiss National Bank President Jordan the same day.

On Wednesday, three FOMC members – Atlanta Fed President Bostic (NV), Minneapolis Fed’s Kashkari (V) and Boston Fed’s Rosengren (NV) will be among the luminaries taking part in a series on “Racism and the Economy,” “a virtual event series focused on understanding the implications of structural racism in America’s economy and advancing actions to improve economic outcomes for all.” I’ve been in this business for some 40 years and I can’t remember central bankers ever participating in a seminar anything like this. It ties in directly with the change in the Fed’s interpretation of its employment mandate and the stress that Chair Powell and others have been putting on the way the pandemic has hit minorities and lower-paid people harder than the upper classes.

We also see a few examples of how virtual conferencing has changed life for officials. On Wednesday at 2 PM local time, NY Fed President Williams (V) will moderate a discussion with Henry Kissinger of all people, hosted by the Economic Club of New York. Then an hour later he’ll discuss “The Road Ahead for Central Banks” on a Hoover Institute webinar. Note that the former event is with a New York club and the latter is with a California institution. Previously it would’ve been impossible for him to participate in both, but now he can do so from the comfort of his own office, I would assume. 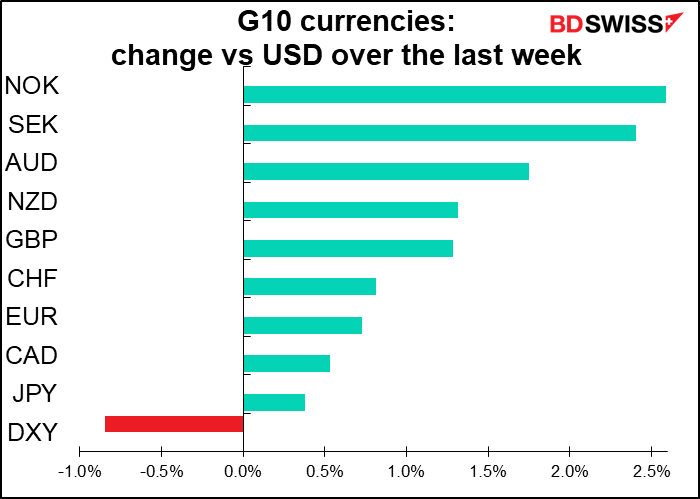 Now on to Brexit

A Week to Remember

The Storm before the Storm